Ukrainian President Viktor Yushchenko, who took the office as a result of the Orange Revolution, lost the parliamentary elections in Ukraine yesterday. Yushchenko had to give way to former ally and the man he bested 15 months ago, Viktor Yanukovych, as official results show. 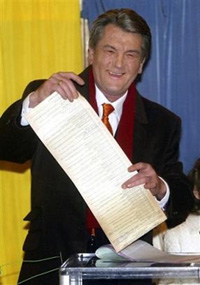 A force led by former Premier Yulia Timoshenko, who was fired by Yushchenko in September, lead with 25.6 percent, the Central Statistics Committee said as of 8 a.m. in Kiev . The Regions Party of Viktor Yanukovych had 22.7 percent, according to the count of 5.62 percent of all ballots.

Exit polls showed the pro-Russian Mr Yanukovych, who was condemned for his alleged role in rigging the 2004 result, finishing top, as had been predicted. However, the polls also had Ms Timoshenko unexpectedly second, ahead of Mr Yushchenko.

Polling stations shut after 15 hours, but voters who had waited in long lines and managed to get inside before the official closing time were allowed to cast ballots, choosing from more than 45 parties that sought seats in the 450-member parliament.

"The Party of the Regions has won a convincing victory," Yanukovych said after three exit polls put his party in a comfortable first place. "We are ready to undertake responsibility for forming the Cabinet and we are calling on everyone to join us."

The polls gave Yanukovych's party anywhere from 27.5 percent to 31 percent, followed by Prime Minister Yulia Tymoshenko's bloc with about 23 percent, and Yushchenko's Our Ukraine bloc with between 14 percent and 16 percent.

Yushchenko's job was not at stake, but the vote was the first since constitutional reforms trimmed presidential powers and gave broader authority to parliament, including the right to name the prime minister and much of the Cabinet.

Contrasting sharply with the Regions party is the one-woman platform of the Timoshenko block: a no-holds-barred government campaign against tycoons like Akhmetov, who according to Timoshenko became fabulously wealthy during the 1990s by turning billions of dollars of state-owned industry into their personal capital, without paying for it.

Both Yanukovich and Timoshenko have flatly and repeatedly rejected any notion of coalition talks between Regions and the Timoshenko Block. Timoshenko even went so far as to declare that she 'wanted criminals out of government, not in my coalition' - a harsh dig at prison time served by Yanukovich in the 1970s.

No matter how they align themselves, the big parties will not have enough seats to form a coalition without the help of three or four little parties. The small groups that clear the 3-per-cent hurdle in the final vote count to enter parliament will be the final kingmakers of Ukraine's next government.

It is worthy of note that Mr Yushchenko's image was damaged by a scandal around his son Andrei who was revealed to be leading a lavish lifestyle on income he allegedly derived from cashing in on the merchandising boom which followed the orange revolution.

It was hard for ordinary Ukrainians to accept since, crucially, revolutionary fervour has not brought improved living standards for most.

Indeed, many Ukrainians who have become disenchanted with the orange revolution are now looking for pragmatic as opposed to idealistic solutions to their problems.