The Ukrainian president earns about $5,000 a month, which is five times less than the wages of Europe's highest-paid official, German Chancellor Gerhard Schroeder 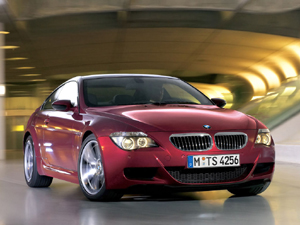 Until recently, Andrey was visiting his girlfriend driving her Mercedes CLS 500 (over $90,000). This week, however, the young man was spotted driving a BMW M6 with Czech numbers CZ3U1 0401. Andrey's girlfriend, Anna, owns an apartment near the building of the presidential administration in Kiev. One square meter of such an apartment is evaluated at more than $4,000.

The basic model of a BMW M6 costs 133,000 euros in Kiev car saloons. The magnificent car is available on the base of a customized delivery only. Reporters found out that there is only one car like that in Kiev; the vehicle belongs to the son of the Ukrainian president, who recently urged Ukrainians not to steal, the Ukrainian Pravda newspaper wrote.

In addition, Andrey Yushchenko has become a patron of Kiev's most expensive night clubs and restaurants. Ukrainian reporters have recently photographed Viktor Yushchenko's son near two most expensive restaurants in Kiev, which enjoy popularity with footballers of Kiev Dynamo team. Eyewitnesses say that Andrey orders extremely expensive champagne for 1,000 euros per bottle and leaves $300 for restaurant personnel as tips.

The son of the Ukrainian president obviously has a fondness for expensive equipment. Andrey owns a Vertu cellular phone, the cost of which fluctuates from 4,700 to 35,000 euros.

Yushchenko's son appears in public with escorting bodyguards, who defend the young man against reporters' curiosity. The press service of the Ukrainian president has recently distributed the following statement: “The car, which I drive, belongs to a friend of mine, whose name I would rather not expose. My parents hired a group of bodyguards for me during the election campaign. I realize the responsibility, which I carry on account of my last name, Yushchenko. I study and work in a commercial firm, trying to obtain financial independence. I do not own a collection of vehicles, but I can make money for my own life.”

It is noteworthy that the Ukrainian president himself earns about $5,000 a month. This profit is five times less than the wages of Europe's highest-paid official, German Chancellor Gerhard Schroeder. Viktor Yushchenko should therefore work for 30 years to be able to afford a BMW M6.

Andrey Yushchenko is a student of the Kiev Institute of International Relations. The Ukrainian president rejected the information about the luxurious property of his son. Viktor Yushchenko stated as a press conference on Monday that his son was simply renting a prestigious foreign-made car.

Yushchenko emphasized that his son works in a consulting firm, the profit of which helps Andrey pay the car rent and bodyguards' services, RIA Novosti reports. “This is not a lot of money, but it is enough to pay for the rent of the vehicle and for the services of the private security firm,” the president of Ukraine said.

According to Viktor Yushchenko, his family receives the income of several millions of hryvnas (the national currency of Ukraine, which corresponds to $400,000). The president urged Ukrainian reporters to leave “women and children” alone if they want to search for compromising and sensational materials. “Those who know my son can confirm that this is a well-bread, moral and religious guy,” Ukrainian President Viktor Yushchenko said.

On the lower photo: Andrey Yushchenko