Julia Timoshenko, who is wanted by the Office of the Russian Prosecutor General, was appointed acting prime minister of Ukraine

Viktor Yushchenko started his first international tour as the new President of Ukraine on Monday. Russia was the first country on the list: Yushchenko arrived in Moscow to talk “quickly and honestly” (as he said so himself) about perspectives of further cooperation between the two countries. A lot of observers estimate the Ukrainian president's visit as an aspiration to establish a contact with Moscow. A lot of followers of the former Ukrainian opposition accused the Russian administration of interfering into internal matters of the neighboring state, taking into consideration Russia's backing of Yushchenko's rival, Viktor Yanukovich. Yushchenko, however, emphasized in many of his interviews and public speeches that he was not intended to continue carrying the burden of resentment of the past. The new president of Ukraine is therefore ready to start everything afresh. It is noteworthy that Georgian President Mikhail Saakashvili had similar intentions, which proved to be totally different afterwards. 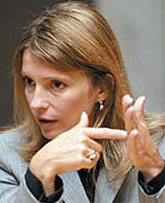 The news about new appointments in the Ukrainian government became known soon after Yushchenko's arrival in Moscow – the Ukrainian president signed adequate orders prior to his departure to Russia. Some of the new appointments clearly show that the new president is not interested in taking account of Russia's opinion and interests. The appointing of Julia Timoshenko on the position of acting prime minister of Ukraine became like a slap in Moscow's face. It is noteworthy that Julia Timoshenko is wanted by the Office of the Russian Prosecutor General on the allegation of bribing officials of the Russian Defense Ministry.

It is up for the Ukrainian parliament, the Supreme Rada, to approve Timoshenko's candidacy for the position. PRAVDA.Ru asked several experts to comment on the surprising news, although they differed in their opinions regarding Timoshenko's chances to become the actual prime minister of Ukraine.

Vyacheslav Nikonov, the president of the Politika Fund, believes that the fact of Timoshenko's appointment is to be perceived as Yushchenko's gratitude to her leading role in the “orange revolution.” The expert added, however, that it was too early to say that Russia's reaction on the matter would be a strongly negative one. Timoshenko's chances to become the prime minister of Ukraine are rather low, Nikonov believes, for she has a lot of opponents in the Ukrainian parliament.

Maksim Dianov, the director of the Institute for Regional Problems, said that Viktor Yushchenko's decision regarding Timoshenko showed that the new Ukrainian president was more interested in the reaction of the European Union and NATO. Russia comes third on the list of priorities. The expert stated that his Ukrainian colleagues do not think that Timoshenko has good chances to take the office of the prime minister. Dianov, however, believes that she will head the Ukrainian government anyway: the parliament will eventually approve her candidacy on the position, the expert said. Maksim Dianov reminded that Viktor Yushchenko swore to keep his pre-election promises during his public speeches on the Independence Square in Kiev. Appointing Julia Timoshenko for the position of the Ukrainian prime minister was one of such promises. Those promises, however, were rather given to the Western community – Yushchenko is demonstrating his predictability to the West.

Deputy Director of the Center for Political Technologies, Aleksei Makarkin, believes that Timoshenko's new career step was virtually the start of her own pre-election campaign. The spin doctor thinks that Timoshenko is determined to run for the Ukrainian president, and it will be easier for her to accomplish the goal if she starts from such a prestigious position. It is worth mentioning that it goes about a perspective of several years, although Yushchenko's health problems are obvious. Aleksei Makarkin believes that the parliament will approve Timoshenko on the post of the prime minister. Vladimir Litvin, the speaker of the Ukrainian government, stated during his recent visit to Russia that the parliament would welcome any candidate for the post. Aleksei Makarkin said that the parliament would not incite a governmental crisis in the country. Timoshenko's appointment does not herald anything positive for Russia, despite her friendly statements about Russia. Julia Timoshenko does not have any sympathies for the incumbent Russian administration. Moscow is currently facing a dilemma: to close Timoshenko's file to its own detriment, or disrupt relations with Ukraine by repulsing the new Ukrainian prime minister, Aleksei Makarkin believes.

On the photo: Julia Timoshenko