China's J-31 aircraft took off for its maiden flight on October 31, 2012. China's first stealth fighter jet, the J-20, was officially adopted by the Air Force of the People's Liberation Army of China (PLA) in 2017. Interestingly, no information about the J-31 has been released ever since. Experts assumed that the J-31 was originally a stillborn project, an expensive PR campaign to demonstrate the scientific potential of Shenyang Aircraft Corporation - the maker of the aircraft. The Chinese government did not finance the project, and Shenyang Aircraft Corporation was developing it on its own initiative and at its own expense. 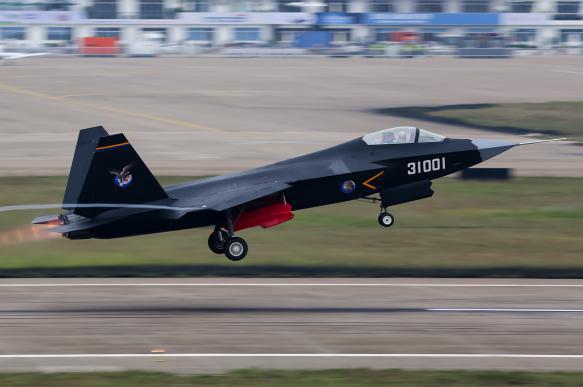 The J-31 was announced as a breakthrough development. China announced its performance details suggesting that the jet would be made for export. Attentive bloggers later concluded that the J-31 was going to be designed as a deck-based aircraft: they saw photos of the aircraft with reinforced front gear. In early 2017, however, the J-31 disappeared from media field.

In early July, Sun Kong, the chief designer of the aircraft, said that the work on the fighter continued as usual. China is planning to launch the serial production of the J-31 in 2020.

The work on the J-31 indicates China's intention to copy the experience of the United States. At first, China designed the large J-20 fighter jet and then proceeded to the development of the smaller J-31. The US Air Force operates the F-22 jet, which complements the F-35. China's J-20 was not designed for exports, just like the USA's F-22. The J-31 is an export aircraft, the price of which will fluctuate at around $70 million. This makes the J-31 nearly the only option on the market of stealth fighters. No other country can offer a stealth fighters at such a price.

Unlike the F-35, the J-31 has two engines. The flight performance of the J-31 looks a lot better. The maximum speed of the J-31 makes up 2,200 km/h vs. 1,930 km/h of the F-35. As for the size, there is no big difference between the two jets. The length of the J-31 is 16.9 meters, its wing span is 11.5 meters, the maximum take-off weight is 25 tons, and the payload weight - 8 tons. The service ceiling of the J-31 is 18,200 meters, whereas its range - 1,200 kilometers. The service life of the Chinese fighter makes up 30 years. It is worthy of note that China replaced Russian RD-93 engines with Chinese-made WS-13E engines. Thus, Russia will not be able to interfere into China's plans to sell its product to foreign countries.

Noteworthy, China has become the second country in the world, the Air Force of which operates  two types of stealth fighters. One is left to wonder whether "made in China" fighter jets can indeed be superior to their Russian and American competitors.