Putin in Azerbaijan: Israel will have to leave Moscow's sphere of influence

Russian President Vladimir Putin came to Baku to participate in the Russian-Azerbaijani interregional forum. Putin will also attend the final stage of the World Judo Championship. However, behind closed doors, Putin and his Azerbaijani counterpart Ilham Aliyev also discussed  topics of military-technical cooperation, the CSTO, as well as issues of the settlement of the Nagorno Karabakh conflict. 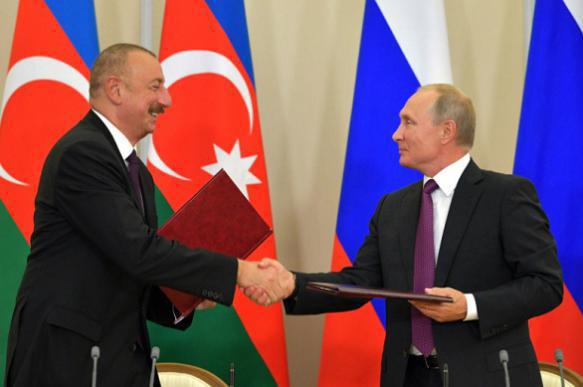 The Kremlin watched closely the recent visit of Israeli Defense Minister Avigdor Lieberman to Azerbaijan. Lieberman promised to supply state-of-the-art air defense systems to Azerbaijan to build an echeloned defense system the border with Armenia. In addition, Azerbaijan will continue purchasing unmanned aerial vehicles from Israel, after they proved to be highly effective in the course of hostilities in the zone of the Armenian-Azerbaijani conflict in April 2016.

Naturally, Moscow wants to seize the initiative from Israel, especially after the shutdown of the Ilyushin Il-20 aircraft over Syria. The Kremlin would not want Azerbaijan - a key country in Transcaucasia  - to cooperate closely with Israel.

What can Russia offer in return?

President of Azerbaijan, Ilham Aliyev, paid a visit to Russia in September of 2018. Aliyev then stated publicly that Azerbaijan had acquired weapons from Russia totalling $5 billion, and this number will grow. According to the Azerbaijani leader, Russia is "the world's most important producer and supplier of military products to international markets." Therefore, Azerbaijan will continue modernizing its army with Russia's help.

Is Azerbaijan going to become a full-fledged participant in the Collective Security Treaty Organisation (CSTO)? However, Azerbaijan is a member of the Non-Aligned Movement, which binds the country to maintain neutrality in foreign policy issues and refrain from joining any defense alliances.

Nevertheless, Azerbaijan may join the CSTO, if Putin allows Aliyev to carry out a quick military operation to regain control over five areas adjacent to Nagorno-Karabakh (the five territories are currently occupied by Armenian troops).

Putin's reaction to this proposal is not known yet. A lot of things in this situation will depend on the policy of new Armenian leader Nikol Pashinyan. If he continues taking Armenia out of the orbit of Moscow's influence to build closer ties with the EU and NATO instead, Moscow will not be delighted with such a development.

The Armenian administration understands the prospect and tries to maintain friendly relations with Moscow, while making steps towards the European Union and NATO at the same time.

Meanwhile, Armenia is keeping an eye on Putin's visit to Azerbaijan and wants to know every single detail of the talks in Baku. From Baku, Putin is flying to Dushanbe for the summit of the CIS countries, where he may try to arrange the meeting between the leaders of Armenia and Azerbaijan, taking into consideration the fact that Ilham Aliyev and Nikol Pashinyan have never met before.

In any case, Azerbaijan has not joined the Collective Security Treaty Organization yet. Interestingly, Azerbaijan's military aviation did not take part in military exercises of air defense forces of the Commonwealth of Independent States that kicked off on September 27. A report from the Russian Defence Ministry said that as many as 100 aircraft from seven CIS countries take part in the exercises: Russia, Armenia, Belarus, Kazakhstan, Kyrgyzstan, Tajikistan and Uzbekistan. Azerbaijan is not among them.

Who loses and wins most from Caspian Sea division