From the very beginning of the coup in Ukraine, Western democracies pretend not to notice the cult of Nazi criminals in the country. 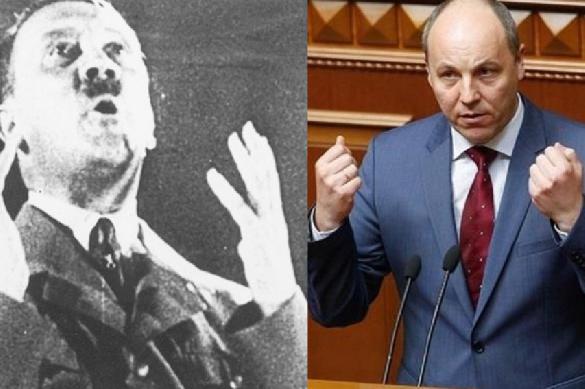 One may assume that neither US nor EU officials have ever heard of Stepan Bandera and Roman Shukhevich, One may also assume that they have never seen neo-Nazi marches complete with fascist slogans and SS symbols in Ukrainian cities. Western officials did not pay attention to the Odessa massacre, nor do they seem to notice the ongoing extermination of the population of the Donbass and pogroms of Gypsy communities.

Many Western officials and publications reproach their Russian colleagues for their Kremlin propaganda bias, as if Russian citizens suffer from the lack of information. In fact, anyone in Russia can access any type of information at any time of day and night from a smartphone, tablet computer, etc. They can access and read Ukrainian news sources as well.

Here is a recent news story from Ukraine that, as we believe, deserves special attention. Andrei Parubiy, the Chairman of the Verkhovna Rada of Ukraine, stated on ICTV channel that Adolf Hitler was the architect of universal democracy.

"I am a huge supporter of direct democracy ... By the way, I will tell you that the most prominent person who practiced direct democracy was Adolf Hitler," said the chairman of the Ukrainian parliament.

The statement comes from the head of the legislative power of Ukraine - one of the top state officials in Ukraine. Parubiy also said that he had studied Hitler's direct democracy at a scientific level and urged everyone not to forget Hitler's contribution to its development.

It appears that those people, whose charred bodies were found after the inferno in the House of Trade Unions in Odessa, had experienced the power of direct democracy. Parubiy, who then served a commandant of Maidan riots, arrived in Odessa to command the process to kill the civilians, who refused to accept the new regime in Ukraine. We believe that Ukraine's hero, SS officer Shukhevich, would be very satisfied with Mr. Parubiy's command.

There is no doubt that Ukrainian MPs will adopt amendments to the legislation and make Bandera-style Nazi exclamation "Glory to Ukraine!" an official military greeting. Linguistically, there is nothing terrible about it, if it was not for the historical background of this word combination - the background that includes such tragedies as Khatyn and Babi Yar. Why not legalizing "Heil Ukraine!" instead to be as much authentic and straightforward as possible?

Meanwhile, Ukraine's Minister for Foreign Affairs Pavel Klimkin complains of the outflow of Ukrainian citizens and calls the situation catastrophic. He said that on the same TV channel, on which his colleague Parubiy sang an ode to Adolf Hitler.

About one million Ukrainians leave their country of direct democracy every year. Mr. Klimkin believes that the trend will preserve in the foreseeable future. As a rule, Ukrainians move to Poland and Russia, even though the Kiev regime declares the latter their enemy. Ukraine does not declare a war on Russia, but makes every effort to make Russia its largest trade partner. Petro Poroshenko, the Ukrainian President, demonizes Russia while making enormous profit from his business on the territory of the "aggressor state." Ukraine pumps "enemy's" natural gas through its territory and profits from it just as nicely.