In early May 2015, the world paid tribute to victims of the Odessa Massacre. In Moscow, Kiev, Washington, London, Montreal and Odessa many remembered the names of those killed in the infamous attack on the House of Trade Unions in Odessa that took place on May 2, 2014. However, few people believe that those behind the terrible tragedy will be held accountable for what they did. 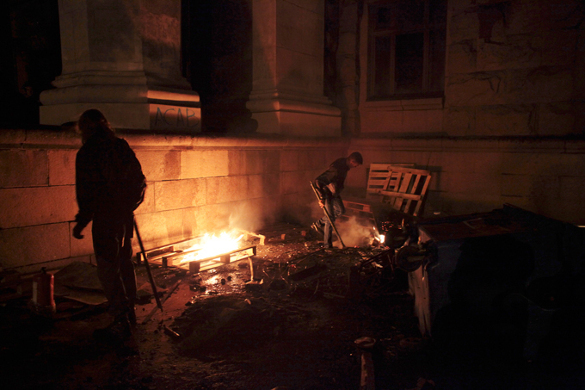 It is generally believed that those, who orchestrated the massacre in Odessa in May 2014, would never be punished for burning people alive and killing those who were trying to escape from the burning hell. "They won't be punished. Ukraine is dead," this is a common opinion that one can hear a year after the tragedy in Odessa.

Is it really so? Who is in a position to lift the boomerang law? The Odessa Massacre showed that its "heroes" have to pay a high price for what they did.

Many of those, who killed innocent people in Odessa then went to kill more men, women and children in Donetsk and Luhansk, but were gunned down in cold steppes of the Donbass.

A pretty 15-year-old activist of the Odessa Euromaidan, who was making Molotov cocktails on May 2 2014, jumped off the roof of a high-rise building a few months after the tragedy. Former MP Lesya Orobets was happy when dozens of people were killed in the massacre. Today, the woman is fighting cancer.

One can talk a lot about the causes of the rebellion in the Donbass. However, residents of the region say that it was the Odessa Massacre, rather than the Kiev Maidan in February that triggered the uprising in the southeast of Ukraine.

The Office of the General Prosecutor of Ukraine has so far failed to complete the investigation of the crimes committed on May 2 in Odessa. Noteworthy, officials with the Ukrainian Interior Ministry acknowledged that 32 people who had taken refuge in the burning House of Trade Unions, died from an "unknown substance", rather than from "high temperatures." Not that long ago, First Deputy Prosecutor General of Ukraine Vladimir Guzyr stated that there were neither toxic gases nor chloroform found in the Odessa House of Trade Unions.

At the same time, the  temporary commission of the Verkhovna Rada of Ukraine investigating the tragedy of Odessa noted in its report back in September that Odessa experts could not accurately establish which toxic substances were found in the bodies of the victims because the experts did not have modern equipment for that.

According to Ukrainian officials, there was no mechanical damage found on the bodies of those killed in the House of Trade Unions. However, the whole world saw pictures of corpses with gunshot wounds to the head and strangulation furrows around their necks. Many saw pictures of charred bodies resting on places untouched by the fire. Some of the female bodies had no underwear on, which means that they must have been raped before death.

Ukrainian officials refuse to see all that. "The bodies of the victims did not show any signs of torture, beatings, gunshot or other wounds. Those people died from carbon monoxide poisoning," said Vladimir Guzyr.

The official Ukrainian investigation believes that the fire was arranged by opponents of the Ukrainian government, who were defending themselves in the House of Trade Unions. Allegedly, the opponents set fire to the barricade at the entrance to the building in an attempt to create a barrier of fire between them and those attacking the building.

Chief editor of the independent Odessa news and analytical website timer.od.ua, Yuri Tkachev, who is a member of the public "May 2 Commission" that investigates the tragedy, said earlier that he did not even doubt that the "official investigation is never completed, and only supporters of the opposition will go to court."

According to him, although it is a well known fact, Ukrainian authorities refuse to expose autopsy, medical records and other documents under the pretext of secrecy. Noteworthy, Human Rights Watch and Amnesty International criticized Kiev for the atmosphere of secrecy around the investigation of the tragedy in Odessa.

Representatives of the sitting Ukrainian government say that people "burn themselves" in Odessa and "bomb themselves" in Donetsk and Luhansk. These are basic explanations for all of the tragedies that have been happening on the territory of Ukraine.