What does Theresa May have under her armpits?

As expected, Russia was accused of the death of a British woman, who died at a hospital in Britain a few days ago after she was supposedly exposed to Novichok nerve agent. British Defense Secretary Gavin Williamson, who earlier suggested Russia should shut up and leave, said that Moscow was "highly likely" involved in the new poisoning incident that took place in Amesbury. Williamson again demanded the world community should strongly condemn Moscow. This condemnation should come on the basis of the peremptory evidence now known as "highly likely." This has become a new trend of the new concept of justice in the Anglo-Saxon world. 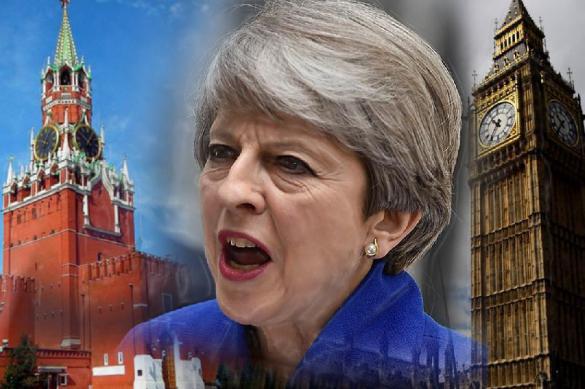 There have been many sad jokes about the so-called "free Western press" being a reincarnation of rigorous Soviet propaganda. The legend of human rights is crumbling and falling apart after the persecution of Edward Snowden and Julian Assange. Guantanamo and CIA secret prisons pale in comparison.

The Russian Foreign Ministry, of course, urged the UK to stop the intrigue with chemical poisons. It appears that the UK is having a chemical booze, wants more and can never stop.

In the meantime, the Anglo-Saxon privatization of the Organization for the Prohibition of Chemical Weapons (OPCW) started bringing its fruit. The Russian Permanent Representative to the OPCW has repeatedly stated that his colleagues in the organization do not seem to hear what Russian officials tell them in response to serious accusations.

British allies say that Moscow should cooperate with London in the investigation of such incidents. Russia, from the very beginning, has been trying to reach out to Britain offering full assistance in the investigation, although to no avail. Russia has made it clear from the start that the Kremlin was interested in disclosing the ambiguous poisoning case.

Against the backdrop of all that, several ministers have left the government of Theresa May, including Minister for Brexit David Davis and legendary British chemist Boris Johnson.

The merits of the former Foreign Secretary of Great Britain are hard to overestimate. His remarkable knowledge of warfare agents has played an important role in creating a media bombshell. May's government even managed to divert public attention from Brexit for a while. After all, the topic of divorce with the European Union does not promise the United Kingdom a lucrative deal.

The resignation of bright political figures, who played an important role in the history of Brexit and the future of Great Britain, may well be the bell that signals the looming end of Theresa May's premiership. The countdown has begun, and the opposition in the parliament will not miss a chance to take advantage of all the blunders of the current British government.

In the meantime, the UK has started another chapter in the story of chemical poisonings against the backdrop of the desire of the British Prime Minister to attend the football match of team England in Russia.

So what does Theresa May have under her armpit? No one knows it yet, because she has never been straightforward either about Brexit or the things that have been happening in the area of the secret lab in Porton Down.