Ukraine: A country of miracles, where people rise from the dead

Representatives of the Security Bureau of Ukraine said that the information about the killing of Russian opposition journalist Arkady Babchenko in Kiev was part of the operation of the Ukrainian special services. 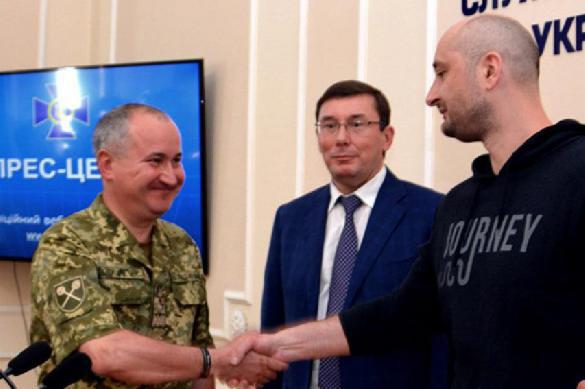 The operation, Ukrainian officials said, helped to capture the person, who initiated the upcoming attempted assassination.

On May 29, it became known that journalist Arkady Babchenko was shot in the back in his apartment building. It was reported that Babchenko died on the way to hospital. On May 30, however, he appeared alive at a news conference, at which he said that the special operation had been prepared two months in advance. "I was let into a month ago, and during this month I saw that the guys were working very hard, they were taking pains and plowing like buffaloes. We were in touch the whole month, we were thinking and working everything through. As a result, the special operation was conducted," Babchenko said.

As he added, he was supposed to be killed prior to the Champions League finals in Kiev. He also said that the price for his assassination was set at $40,000.

Official representative of the Russian Foreign Ministry, Maria Zakharova, said that the staging of Babchenko's murder had a propaganda effect.

Chairman of the International Association of Veterans of Alfa anti-terror unit, Sergei Goncharov, said that Ukraine's operation was an "anachronism." Yet, member of the board of the Ministry of Internal Affairs of Ukraine, Anton Gerashchenko, believes that the Ukrainian security forces were guided by finest role models in their actions.

The head of the Council Committee on International Affairs of the Council of Federation, Konstantin Kosachev, said that the staging of the journalist's assassination should be attributed to "a string of delusional actions of the Ukrainian authorities against Russia."

The head of Reporters without Borders NGO Christophe Deloir called the situation part of the media war and expressed his deepest indignation in connection with the manipulations conducted by Ukrainian secret services."

Ukrainian security forces claim that Russian special services stand behind the operation to plot Babchenko's assassination. SBU representatives did not provide any evidence to prove their point, but said that the organiser "was talking about the need to eliminate 30 persons in Ukraine." No names were specified.

Many assumed that the whole operation to stage the journalist's death was bizarre. According to the version of the SBU, the Ukrainian special services knew who the organiser was (the "hand of the Kremlin"). Plus, the assassin had received $40,000 on his account. Consequently, the SBU had known the identity of the assassin long in advance. It was also said that the assassin had Babchenko's passport photo. Why would the killer need such a photo given that it was taken nearly 20 years ago? It is an open secret that people may look very different from their passport photos. SBU claims that as long as the assassin had Babchenko's passport photo, it means that the assassination was arranged by Russian special services. Yet, it is not only Russia that may have access to Babchenko's passport. Passport is not a matter of state secrecy. Babchenko, like any other Russian citizen, would very often hand his passport to commercial organisations, such as banks, travel agencies, visa centres, etc. To crown it all, Babchenko, apparently, had received residence permit in Ukraine, which means that the Ukrainian government has a copy of his passport.

US journalist Jill Dougherty noted that the fact that Babchenko is alive was obviously good news, but this fact also struck a huge blow to the reputation of Ukraine, because no one would ever trust what the Ukrainians say.

The silence of Ukrainian President Petro Poroshenko at the meeting with his German counterpart Frank-Walter Steinmeier looked particularly remarkable.

It is worthy of note that a number of Western leaders condemned the "killing" of the Russian journalist and implied in their comments that Russia was to blame again.

"The Skripal case was made before the presidential election in Russia. The case of Babchenko was fabricated on the eve of the World Cup in Russia. It is important for them to disrupt all political processes and develop the process of Russophobia instead," Russian Senator Franz Klintsevich said.

Traditionally, after the announcement of the news about the killing of Babchenko, the perpetrators were announced immediately - Russian special services. No investigation is required for such cases at all - they just point fingers at Russia and say it. The scenario was used in the UK, when Sergei and Yulia Skripal were said to have suffered from exposure to a highly toxic poison, from which they miraculously recovered within a very short period of time. A similar story was used in Syria, when the West masterminded the chemical attack in Eastern Ghouta. A number of victims of that attack soon rose from the dead and said that the attack was staged.

The Babchenko story is bizarre indeed. The journalist is alive, and all those, who have accused Russia of the crime seem to have made a blunder. So far, Western leaders have not released any new comments on the subject.