Russia tells Armenia where to sit

Armenia joined the Eurasian Economic Union in 2015. The country joined the Collective Security Treaty Organisation, the CSTO, in 1992, having received trade preferences and military assistance from Russia. Not that long ago, it was revealed that Armenia's first priority was European integration and cooperation with NATO. Apparently, Moscow will not repeat the mistakes that were made in Ukraine. 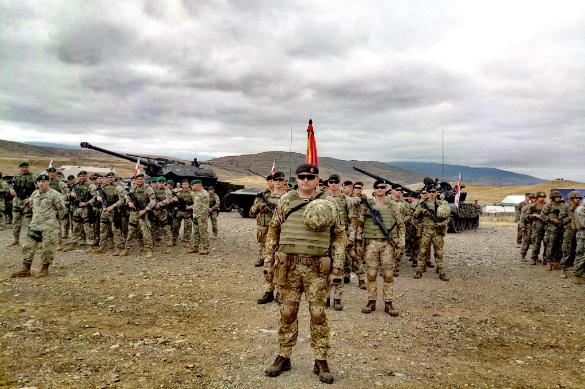 This year, Armenia announced the desire to associate with the EU. The government of the country  prepared a relevant document for signing. Long before that, Armenia entered NATO's Individual Partnership Action Plan (IPAP). The new plan, approved for 2017-2019, envisages consultations with the alliance on regional security, the development of Armenia's military doctrine, the improvement of defence and budget planning processes, as well as the participation in peacekeeping missions of the military bloc in Kosovo and Afghanistan. During recent NATO summits, the Armenian delegation was present as an observer.

It appears that Armenia does not try to sit between two chairs, but has opted for the chair, where Russia is nowhere near. This looks like a move to betray the Russian Federation. It also looks like Armenia may soon seek NATO's support in the solution of its problems with Turkey and Azerbaijan.

"Multi-vector" policies of Armenia did not stop the country from making claims about Russia's multi-vector policy - the establishment of economic relations with Turkey, plans for Ankara's accession to the Eurasian Economic Union and the sale of weapons to Azerbaijan. It is worthy of note in this connection that Azerbaijan pays live money to Russia for its weapons, whereas Armenia borrows weapons from Russia by buying them on hire purchase terms.

Armenia needs to understand that the Eurasian Economic Union and the Collective Security Treaty Organisation (CSTO) are neither vestiges of the former USSR nor a feeding trough. Membership in these organisations stipulates for integration through competition and mutual assistance.

We would also like to remind our Armenian friends that it was Vladimir Putin (not Angela Merkel) who stopped the offensive of Azerbaijani troops in Nagorno-Karabakh in April. Russia has historically established its friendly attitude towards Armenia. Suffice it to recall that Russia recognised the Armenian genocide in 1995 - 20 years before Germany did it.

If the Armenians give it a good thought, they will understand that Russia's rapprochement with Turkey deserves a welcome, rather than condemnation for a very simple reason: Moscow and Ankara get closer to each other not so much politically as economically, and Armenia can benefit from it. After all, its border with Turkey is closed, so why not ask Putin to help mitigate Erdogan's position?

It seems, however, that common sense prevails. Armenia has refused to participate in Agile Spirit 2017 exercises to be held in Georgia by NATO partners from the USA, Romania, Ukraine, Bulgaria, Latvia and Romania (Azerbaijan boycotts them too). Armenian servicemen and representatives of the armed forces of the country did not attend the opening ceremony of the exercises. "No comment," Armenian Defence Ministry spokesman Artsrun Hovhannisyan told TASS.

His deputy, Artak Zakaryan, said that the military-political diplomacy of Armenia fully corresponds to the foreign policy of the republic. Therefore "it is not at all clear why Armenia was listed among the participants of the drills."

"Armenia's participation in NATO exercises was originally stipulated as part of a multi-vector policy," Arman Boshyan, chairman of the Yerevan Geopolitical Club, told Pravda.Ru. "However, I believe that, given the global exacerbation in Syria and the sanctions war, this policy can not justify itself. Given the fact that Armenia is a member of the CSTO and the Eurasian Economic Union, we need to more specifically determine where we are going and what relations we are building in the military sphere. I think that Armenia should take a more active part in the Syrian campaign, because it is not only about the Syrians, but also about the Christians. Armenia, NATO and Turkey have different ways to go," Arshan Boshyan said.