Turkey has recalled its ambassador from Germany for consultations in connection with the recognition of the Armenian Genocide from 1915 by the Bundestag. 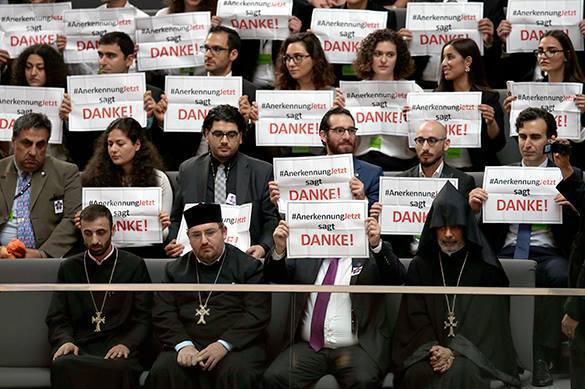 Turkey announced its intention not to accept the decision of the German Bundestag on the Armenian genocide, as the topic remains controversial for historians.

Earlier, Turkish President Tayyip Erdogan warned German Chancellor Angela Merkel in a telephone conversation of deterioration of bilateral relations if the resolution was going to be adopted.

The document adopted by the German Parliament is called the "Memory of the Genocide of the Armenians and Other Christian Minorities of the Ottoman Empire 101 years ago." The document was approved almost unanimously: one only MP voted against and another one abstained.

Most countries, as well as Russia, acknowledged the fact of misdeed. However, Turkey refused to do it. Turkey and Armenia have practically no relations, but international geopolitics is involved in the issue of genocide. The relations between the two countries are improving at local level. Why are politicians so adamant?

On April 24, Armenians in the whole world commemorate an anniversary of Armenian genocide by the Ottoman Empire. Traditionally, solemn and mourning events take place in Yerevan at the Memorial Complex on top of Tsitsernakaberd hill. The monument is 12 inward-leaning slabs that symbolize 12 vilayets (provinces) of the Ottoman Empire, which territory Armenians inhabited before the genocide. The eternal flame is housed in the center of the monument. In Armenian churches there is a funeral service this day. Besides, numerous mourning events are held in different cities of the world: in Moscow, Tbilisi, Paris, Marseilles, Cologne, Berlin, Los Angeles, Buenos Aires and others.

Meanwhile, the fact that Armenian genocide was acknowledged by Turkey, the assumed successor of the Ottoman Empire, long became a stumbling block to the relations between Ankara and Yerevan. Turkey seeks to join the EU, however most EU members demanded the acknowledgement of the genocide. Experts and analysts question: “Will the issue of Turkey’s responsibility for genocide turn into the issue of the world politics?”

It is to be noted that today the fact of the genocide was acknowledged by 15 countries, including Russia, France, Italy, Switzerland, Canada, Lithuania and above 30 US states. Last year the US Senate Committee on Foreign Relations approved of the resolution that acknowledged Armenian genocide by Turkey, despite the fact that the White House recommended not to do it for fear of possible aggravations in the relations with Turkey. Anyway, the resolution is neither an obligation, nor a law.

Turkey stated in response that it might decrease its help to US troops in Iraq. According to Egemen Bagis, the deputy chairman of Turkey’s ruling Justice and Development Party, “US troops in Iraq are largely dependent on Turkey, and if the USA adopts a law on Armenian genocide, Ankara will have to reduce the help.”

Why has the issue of Armenian genocide turned into the issue of the world politics?” It is not persistence of Ankara and its own view of the history of Armenians and Turks. According to Armenian sources, the genocide claimed 1.5 million lives. At night of April, 24 1915 the government of Young Turks arrested and killed practically all the Armenian intelligence in Istanbul. Then there was a mass deportation of Armenians from all the provinces of the Ottoman Empire.

Turkey ’s authorities have their own version of events. They call the deportation of Armenians “a forced migration”, since Armenians were against the Turkish government during the attack of Russian troops. Turkish historians argue that the operation claimed 300,000 Armenians at most.

Yerevan and Ankara have been at the state of cold war for almost 100 years. They did not break the ice even in the post-Soviet years. Although Turkey was the first country to acknowledge Armenia’s independence after the breakup of the Soviet Union, the borders between the countries has remained closed. Turkey did not acknowledge the genocide, but it also argued that all charges of the genocide should be dismissed. Moreover, it backed up Azerbaijan in the Nagorno-Karabakh issue. The more Europe insists on acknowledgement of the genocide, the stronger Ankara denies the fact.

Weak steps towards better relations yielded no results. Ankara offered Armenia to participate in the mixed committee that would have ready access to archives to investigate mass murders. No further steps followed. Armenia agreed to take part in a project of building the Kars-Akhalkalaki railroad; however, the issue is still up in the air.

After France acknowledged the Armenian genocide in 2001, Turkey witnessed large-scale boycotts of French commodities, and French companies were not allowed to take part in lucrative projects. As a result, the turnover between Paris and Ankara decreased by over one billion dollars in a year.

So why does the Armenian genocide of the past century excite comment and cause a standoff between Ankara and the West? The issue of the Armenian genocide is not as simple as that. There is really a growing confrontation between Europe and Muslim countries, as well as the important geopolitical aspect of the problem in the strained struggle for energy resources.

Acknowledgement of the genocide entails consequences like in the case with Germany and Austria that acknowledged the genocide of the Jewish people during the Second World War and the derision of Slavs and other peoples. Both countries pay compensation to sufferers.

In the case of Turkey Armenia may claim material and territorial compensation, for Mount Ararat, the symbol of Armenian people, is situated in Turkey. The former president of Armenia, Robert Kocharyan, stated that even if Turkey acknowledged the genocide, that would not mean that Armenia would claim territorial and material compensation from Turkey. Nevertheless, Turkey is afraid of that, for Turkey’s economy will not endure it.

However, the issue of the Armenian genocide is likely to be followed by the issue of the genocide of Kurds who Ankara had struggled for years. An illustration of this scenario may be an interview of Okhran Pamuk to a Swiss journal where he mentioned a million victims of the Armenian genocide and 30,000 Kurds who died in 1984-1999. Okhran Pamuk was attacked by the nationalistic press and strongly criticized by aggressive demonstrators.

As for the genocide, tragic events really took place, and people really should remember their forefathers. They will go to the Yerevan monument to pay homage to victims of 1915; they will light candles to commemorate them. But time is a great healer, and Armenians whose ancestors fled from the Kars massacre now marry Turks and live happily. Nevertheless, they will come to Yerevan on April 24 and will light candles for victims of the genocide. Turkish husbands will tell nothing.

Hopefully, history will not play another practical joke with this region, and Ankara and Yerevan will not let a spark kindle a flame. Moreover, children born in Armenian-Turkish families should take care for that. Politicians of Armenia and Turkey should be reasonable, as well as politicians of those countries that play a geopolitical game in the Caucasus.