Chinese leader Xi Jinping delivered a landmark speech within the scope of the BRICS business forum, in which he challenged the dominance of the West in global economy. Judging from his speech, China intends to build a new global chain of values with partners by re-balancing economic globalisation. 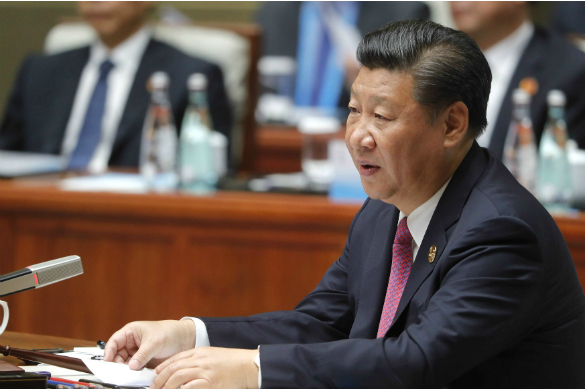 According to Xi Jinping, Western powers have been ruling the world order for too long, but this page has been turned and it is developing countries that come to the forefront. The growth rate of developed economies this year will make up 2% and 1.9% next year, a report from the July IMF World Economic Outlook said. Similar indicators for emerging markets and developing countries make up 4.6% and 4.8% respectively. As we can see, the latter will be developing twice as fast - this trend has been observed for several consecutive years and many approach it as a normal phenomenon.

In September 2006, Foreign Ministers of China, Russia, India and Brazil held their first meeting on the sidelines of the meeting of the UN General Assembly and launched official cooperation of BRICS countries. For ten years, interaction between them has been deepening further and further, and it is BRICS members that make an important contribution to stimulating the growth of the world economy, improving global management and promoting the democratisation of international relations.

The combined economy of five BRICS countries has grown by 179%, and the share in world economy has exceeded 50%. It took the countries only ten years to become one of the strongest drivers of world economy. More importantly, Xi Jinping noted, the above-mentioned figures designate considerable improvement in the lives of billions of residents of countries outside the Western world. The progress of emerging markets and developing countries in the modern world are impressive against the background of "chaos" and "retreat" of Western countries.

The Chinese leader asks how BRICS members can handle the new historical reality, let development embrace broader territories and increase the participation of countries with emerging markets in global governance. He offers an answer to this question, which may seem a surprising one to many.

According to Xi Jinping, BRICS countries should promote the "BRICS plus" format. In Xiamen, a dialogue between emerging markets and developing countries is to be held, when leaders of Egypt, Guinea, Mexico, Tajikistan and Thailand and their counterparts from BRICS countries will discuss cooperation in global development. "BRICS attaches great importance to cooperation with other emerging and developing countries and has formed an effective dialogue mechanism with them," the Chinese leader said. Countries with developing economies seek to enlarge the "pie" of world economy, "without touching someone else's cheese," which is one of the deepest manifestations of the spirit of the BRICS countries.

The Chinese leader believes that the creation of BRICS+ will create a stable, open, inclusive and favorable development environment for emerging markets and developing countries and will also help such countries jump into the fast train of China's development by increasing the share of their responsibility and the right to vote.

"One arrow is easy to break," Xi Jinping quoted the Chinese proverb, "but if you take ten arrows, it's not so easy to break them."

Although BRICS countries go against the wind to some extent, the "golden bricks" will never lose their value, and the general trend of the development of the group will not change.