An article in The New York Times, which said that the DPRK successfully makes new missile engines based on Ukrainian missile technologies, received a development. Representatives for the Kiev government strongly rejected the very possibility of it, but there were other, quite contradictory statements made on the subject. 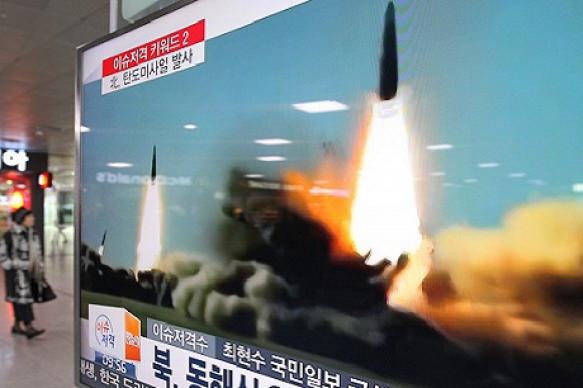 At first, Ukrainian officials claimed that Ukraine does not make such engines Afterwards, it was said that ripoffs of the engines could be made in another country to be supplied to North Korea via China.

Predictably, Moscow was accused of staging the scandal. The head of the National Security and Defense Council of Ukraine Alexander Turchynov said that it was an "anti-Ukrainian campaign" orchestrated by Russian special services, while the head of the Ukrainian Space Agency is confident that "the article in the NYT was inspired by Russia to harm Ukraine's image."

Yesterday, CNN published a video, which, according to Ukrainian special services, shows the arrest of two "North Korean spies," who were allegedly captured red-handed in 2011 in a garage in the city of Dnepropetrovsk as they were trying to make copies of top secret documents. During a recent meeting with reporters, one of them denied the guilt, while the other one pleaded guilty partially.

The video was published in response to accusations of Ukrainian missile technologies allegedly used in the DPRK. What exactly did the American television channel want to say by airing the video recording provided by the Ukrainian side? Does it mean that spies tried to infiltrate Ukrainian missile maker Yuzhmash, but Ukrainian counterintelligence agents were able to protect missile secrets?

Soon after the publication of the NYT article, Ukrainian President Petro Poroshenko invited its authors to come to Ukraine to confirm that the accusations against Kiev were groundless. Later, Poroshenko ordered to set up a work group to verify the information published in the authoritative US newspaper.

The Ukrainian president gave three days for the investigation. This time is up, but no official announcements made at all.

Spokespeople for Yuzhmash factory denied the information as well. At the same time, general designer of the company, Alexander Degtyarev, said in an interview with Strana.Ua publication that copies of the engines could be made elsewhere.

Former employee of Yuzhnoye Design Bureau told the same publication on conditions of anonymity that the DPRK could obtain missile technology from the Ukrainian design bureau. According to him, the North Koreans could find an "unofficial approach to the Ukrainian side."

Apparently, the story is not about to end. The source of North Korea's surprise "missile power" is likely to be unveiled in the near future.