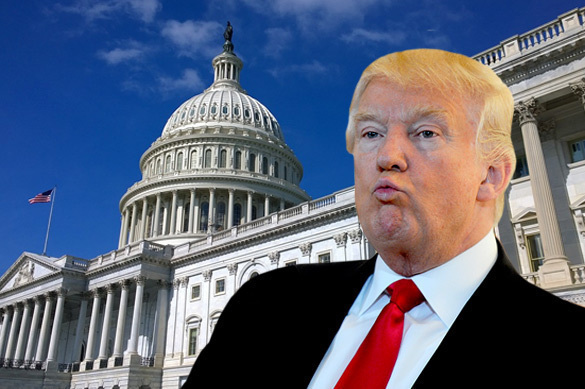 Is there a catastrophe that crushed the EU, besides a few floods and damaging fires? It all depends on how you view world affairs.

Recently, the newly elect U.S. President, Donald Trump, made his first official visit to Poland - the least powerful new member of the US and NATO - insulting the rest of the EU and prominent NATO members.

Poland was ecstatic to host Donald Trump for a few days. Polish citizens have long been known as the vassals of the EU, providing cheap labor to Germany and France. Now with a new status they are ready to give their former toilet cleaning jobs to the Ukrainian enthusiasts, since the latter finally got their much-anticipated free visa to travel, mostly to find jobs. Did I mention that about a million Ukrainians work in Russia?  Of course, that's not a publicized fact.  How can the 'sworn' enemies be welcomed to work in Russia?

Punch in the face for Merkel

Trump's visit to Poland was a punch in the nose for an aging Angela Merkel, who is still balloting for the fourth term to remain as Chancellor of Germany.  Certainly, Trump's snubbing of her, would not go unnoticed. Germany was one of the strongholds of the EU. Poland was accepted in EU with one aim to irritate the former Soviet Union, now renamed as the Russian Federation. Polish and Ukrainians ongoing hatred towards Russia was originated and packaged in Washington.

The whole world knows that the Soviet Red Army liberated Poland from fascism during World War II and lost their bravest men who fought ferociously, leaving about 600,000 Russians, Ukrainians, Jews, Belarus, Georgians and many others from former Eastern block nations on the Polish land.

Recently, the Russian archives, the complete documents of these trying times, were published for the fist time on the Russian Defense website. The documents showed that Poles were extremely grateful for their liberation; they treated Red army soldiers with more respect than their own countrymen.

However, that was about 70 years ago. Since then, times have changed. The narrative of the real history was slowly revised and the new generation became believers that the Soviet Army was not a liberator, but an occupant. Germany was glamorized as a fighter of an evil Bolshevism.

The Soviet army was the first to liberate Auschwitz prisoners and witnessed the atrocities of the German Nazis.  Despite this, a Polish President, Andrzej Duda, went as far as to pass a new law to remove all Soviet symbols, including the 648 monuments of the fallen heroes who sacrificed their lives liberating Poland.

Andrzej Duda chose a shocking date to pass his gruesome law - the anniversary of the dreadful day when the German forces attacked Soviet Union on June 22, 1941 -

which has brought more controversy and insult to the Russian Federation.

Although there were no objections from the EU, one country stood up and signed the agreement with the Russian Federation to veto the Polish law to remove the Russian monuments from Poland. This courageous country is Israel.  About one thousand of the remaining former Red Army veterans reside in Israel.  They were appalled that Poland turned its back on them, eradicating their history.

Like Russia, Israel celebrates the Victory Day on May 9th, carrying their family members' pictures in large posters marching in the parade. The veterans wear their medals with pride, unlike those in the Ukraine, where it was forbidden to display war medals in public! On May 9th the Kiev punks had the nerve to beat the former veterans of WWII for their medals and other relics related to their courage.

Donald Trump has a good relationship with Israel, unlike former U.S. President Barack Obama.  If Trump backs Israel on this, Russia will benefit, without being labeled as Trump's agents.  The media have been overly aggressive against Trump and his family members.  They are documenting his every step in the hope to impeach him and replace Trump with a notorious neocon, Mike Pence.

We can never let it happen if you we want to avoid war. None of us will be left after the confrontation of two super powers with nuclear weapons. Even if Washington makes a first move, Russian nuclear weapons will be automatically activated to attack back. That's a fact! There will be no winners.

Getting back to Poland, there is a small village with a group of volunteers and especially one man - Polish activist, Jerzy Tyc - who spent his own money to restore many fading monuments to the Soviet soldiers.  He was seen doing some restoration work, including painting them and was asked if his restoration was due to an order from Kremlin. He replied: "Absolutely not. It was my mother's."

When she was 13 years old, the Red army collected youth and sent them to a safe place before the deadly final battle in Poland.  She never forgot it and her son is doing whatever he can to keep the memory of the fallen Soviet soldiers who liberated his country.

Source Just days ago a Polish woman expressed her gratitude to the Russians, saying because of their ultimate sacrifice, Polish people can speak their language, instead of German.

Sometimes I watch Russian Forum TV discussions, where a German guest, an American, Michael Bohm, (who bizarrely craves to become a Russian citizen, while being an ardent Russophobe), a few Ukrainians, a few 5th columnist Russians, a number of true Russian patriots and two obnoxious Poles, Jacob and Tomasz. Tomasz is a journalist I met through Twitter and was worried about his safety, since Kiev made threats to his life last year. Now Tomasz is on Russian TV openly spitting into a Russian soul, feeling untouchable. Nevertheless, one of the patriots who happened to be on the show warned him to not repeat his insulting words towards Russia to avoid confrontation.

Tomasz did it again without hesitation and smiled broadly. He received a hard blow to his head. Shall I come clean and tell you I was pleased? I can't believe how quickly I turned from a caring person to a satisfied viewer having seen that justice was served.