Will US weapons kill on European land?

Statements from the Special Representative of the White House in Ukraine, Kurt Volker, about the possibility for Washington to ship lethal weapons to the Kiev regime became a sensation. What are the objectives of the Trump administration? 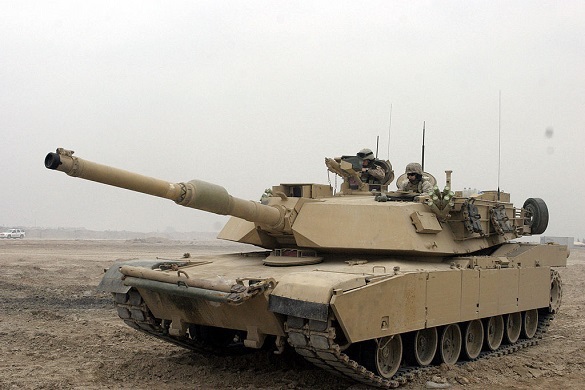 In Kiev, the statements from the US official have produced the feeling of euphoria. Ukrainian politicians and the military already see Abrams tanks destroying separatist Ukrainians in the Donbass.

It's no secret that Petro Poroshenko has been asking the United States for lethal weapons for a long time already. For the time being, the Americans have limited their promises to supplying non-lethal military equipment. They know well that the appearance of US weapons in the conflict zone would inevitably trigger an outbreak of violence that may quickly evolve into a full-scale war. Why is the US position changing now?

In an interview with British journalists, Volker said that supplies of defensive weapons to Ukraine would not become a provocation. Where does this conviction come from? It is impossible to imagine the Ukrainian troops armed with highly efficient hardware not unleashing aggression against the People's Republics of Donetsk and Luhansk. It is also difficult to imagine that the victims of such aggression will not respond. To crown it all, it seems absolutely unbelievable that Russia will not take tough measures to protect its interests and its territory.

Actually, Russia has already regrouped its troops in the Ukrainian direction, which caused great concerns in the West. Putin's official spokesman, Dmitry Peskov, had to remind Western journalists that Russia has every right to position its armed forces anywhere on the territory of the Russian Federation.

Whatever they say, one cannot change geography: Ukraine is very far from the United States, and Americans can only care less if there is a war happening in Ukraine and what happens to the country in the end. The Americans had the same attitude to the wars that they unleashed in Iraq, Afghanistan, Libya, Yugoslavia. Washington pursues its own goals and does not bear any responsibility for the crimes committed.

First and foremost, the Americans have torn Ukraine from Russia and they excelled in it. They have empowered the regime, the existence and ideology of which is based on hatred for the Russian Federation. At the same time, the Americans have achieved another goal: they have destroyed the system of normal interaction between Russia and Europe.

Europe is tired of the US-imposed confrontation with Russia. After Brexit, elections in France and the upcoming elections in Germany, hopes emerge for the Russian-European relations to recover. If this is the case, a mutually acceptable solution for the Ukrainian problem can be found, for example, within the framework of the Norman format, in which the US, as is known, does not participate.

The Kiev regime has been unable to solve any problems that Ukraine is currently facing. Without massive external support, the Kiev regime will not last long and will pass away naturally.

Volker's remarks are meant to prevent the natural development of the situation leading to the extinction of the Poroshenko regime. The new American policy, apparently, wants to strengthen this regime (at least theoretically). This will destroy hopes for a peaceful settlement of the conflict in the Donbass, intoxicate Ukrainian nationalists even more.

All this indicates the beginning of a large-scale war in Europe. Does the USA need it? Not likely. It seems that the goal is not to let the Ukrainian conflict fade, but make it unmanageable.

It is enough to talk about the possibility of delivering lethal weapons to achieve this goal. Certain types of obsolete weapons (for example, anti-tank weapons) can be delivered to Kiev, albeit with strict restrictions for its use. Of course, one way or another, American weapons will pop up in the conflict zone, but they will not give a decisive advantage to the Ukrainian Armed Forces.

The prime goal of the White House is to get the US connected to the negotiations between Russia and Europe. America is not happy with the uncontrollable Norman format. It is no coincidence that Volker's statements were made when the leaders of the Norman format held telephone talks for the first time in a few months.

Russia and the republics of the Donbass will show strongest resistance to anyone willing to gain one-sided advantage to solve the Ukrainian crisis by force, and US weapons will not kill on the European land.