More Russia Sanctions From US Congress

One would think that a Giant Tsetse fly has bitten America and that the whole nation is suffering from a terminal sleeping sickness. The accompanying delirium makes this afflicted patient lash out at everyone in a futile attempt to punish others for the smitten invalid's own faults and misdeeds. 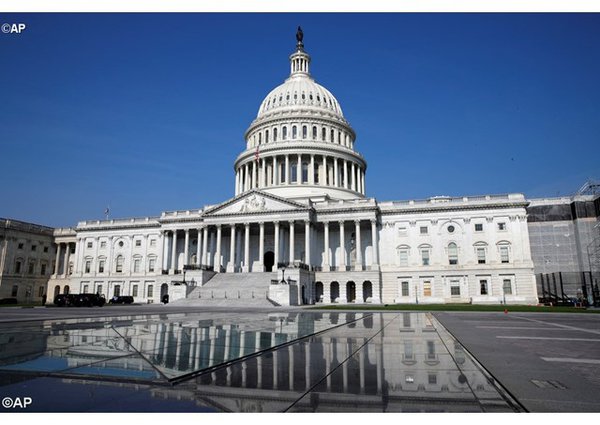 The US Congress in both houses has decided to impose greater and more severe sanctions on their erstwhile World War II ally, Russia. And why? The US is irked by its own foreign and domestic failures and ill-conceived military expeditions so it says it is Russia's fault. In particular, Congress blames a personification of Russian culture and know how on President Vladimir Putin.

The ancient Greeks saw it clearly when they observed that, "we carry our faults in a sack on our backs so it is very easy to see the flaws of others but not our own".

So who's behind this indictment of the Russian Federation and why?

The Denver Post cites Associate Press on who is in fact leading the charge against Russia: "Democrats herald agreement on sweeping Russia sanctions bill".

"WASHINGTON - Congressional Democrats announced Saturday that a bipartisan group of House and Senate negotiators have reached an agreement on a sweeping Russia sanctions package to punish Moscow for meddling in the presidential election and its military aggression in Ukraine and Syria.

Rep. Steny Hoyer of Maryland, the No. 2 House Democrat, said lawmakers had settled lingering issues with the bill, which also includes stiff economic penalties against Iran and North Korea. The sanctions targeting Russia, however, have drawn the most attention due to President Donald Trump's persistent push for warmer relations with President Vladimir Putin and ongoing investigations into Russia's interference in the 2016 campaign."

So these are the charges.

Count One: Russia "meddled" in the US election

The US Congress has no hard evidence that has anything to do with this charge of Russian election fraud and meddling. There is almost always in US politics however, the political need to place blame on someone else.

Stirring up prejudice against Russia to cover-up the US Legislature's own failures, both in foreign and domestic milieus, is part of that political need.

Almost every American knows down deep that in the 2016 Presidential Election, the "fixaroo" was in. They have a general view that most US elections are not on the up and up.

The elitist "big boys" signed a "contract" to deliver to Hillary and America, a brand new Oval Office. The oval shape of course is because nothing's on the square in Washington. That's not to say that there were not "big boys" that owned Donald Trump as well, this was a kind of "mob war" that happens now and then.

So the "big boys" in the Democratic "mob" are still showing their displeasure that the US citizens woke up momentarily from their sleeping sickness and gave Hillary the boot.

American citizens by voting for Trump, while Hillary posed in front of a mirror practicing her victory speech created the unheard of precedent of rising up against the tyrannical and corrupt US wealthy oligarchs that own Congress.

The Democratic and Republican Party bosses' counterattack is now playing out in the equally controlled and corrupt US press and media.

To look good the procured American Fourth Estate works in tandem with the crooked US political kingpins to "manufacture" some kind of evidence against President Trump, The Russian Federation and President Putin.

Congressional sanctions single out their "patsies" and proceed to punish everyone unjustly.

But every cloud has a silver lining. Although any real evidence of Russia's meddling in the US election is non-existent, the Sleeping American Public, the SAPS, must wake up from a nightmare of crooked US elections, fake news stories, and the reality that what their government should be is being held hostage by public corruption and gangster thugs.

What better way for Congress to take the heat off their own crooked dealings than to blame Russia and stir up as much hatred as they can?

Count Two: Russia is the military aggressor to the whole world.

Proof? Congress makes up things as they go along. They don't need proof. They can vote on making facts whether they are true or not.

They wave the flag again and again, put Congressional seals on their secret documents, put false and tainted stories on the news shows, stick feathers in their hats and call it macaroni!

Now isn't that the "cat's meow"? Why the good ol' US of A is never aggressive or imperialistic except Monday through Sunday and 24/7.

Remember how in Viet Nam the US of A sent troops and military aid to plant geraniums in the Indo-China jungles? Of course the US Congress forgot to tell us the geraniums were to be placed on the graves of millions of innocent Viet Namese and also American souls. Congress still thinks that war was Russia's fault as well.

And then there is Iraq and Afghanistan. Can anyone here remember how often the US sent such explosive gifts to more than a few wedding parties? As is a typical gift for newly weds, the US sent many Iraqi and Afghani couples toasters. Of course it was the newly weds and the wedding guests that got toasted. Congress bought those toasters on sale because human life is so cheap to them.

And let's not forget how Yugoslavia and Serbia fared as congressional members waved little American flags again and sang the National Anthem, off key as we would expect.

Why the kindly US tried to raise the educational standards in Serbia twice, bombing children on their way to school, bombing passenger trains filled with civilians commuting from work to home, and then ripping off a part of Serbia's territory, Kosovo, and giving it to known Albanian terrorists who in turn trained more terrorists there.

Now that's what Congress is all about!

Yes Congress, murdering Serbian school children according to you, must be Russia's fault as well. And now you invade Syria and say that Russia is hostile for protecting that nation's sovereignty?

That's Congress! You break the law and blame someone else.

But the American public must come out of their sleeping sickness and finally realize that what Congress does is sanction even their own citizens more than anyone else.

This same Vichy style US Legislature that is sanctioning Russia plans to criminalize American citizens for exercising their God given inalienable and US Constitutional Rights.

As "More Sanctions On Russia" laws are passed through Congress, its same mendacious legislative members also strip American citizens of their freedom. The Intercept put it all in focus regarding the "Israel Anti-Boycott Act", now in both the House and Senate.

"THE CRIMINALIZATION OF political speech and activism against Israel has become one of the gravest threats to free speech in the West. In France, activists have been arrested and prosecuted for wearing T-shirts advocating a boycott of Israel. The U.K. has enacted a series of measures designed to outlaw such activism. ......

...Perhaps the most shocking aspect is the punishment: Anyone guilty of violating the prohibitions will face a minimum civil penalty of $250,000 and a maximum criminal penalty of $1 million and 20 years in prison."

Jefferson, Franklin, Adams, and Washington are all doing cartwheels in their graves. And they've been dead for centuries, especially to Congress.

Who would have ever thought that Russia and the American public would both be victimized and sanctioned by the Vicious Villainous Vichy Congress?

The faces of tyranny take on many facades but the US Capitol has developed the most sardonic countenance as it tries to crush the life out of human dignity.

Yes Congress, that sack on your back has gotten too heavy and too full for you. Before you sanction anyone else put your own sack down, open it, and take a whiff. It stinks.