The Atlanta Plan: The judicial-media coup in Latin America

The international conspiracy to overthrow the progressive presidents of the continent using the media and the judiciary. 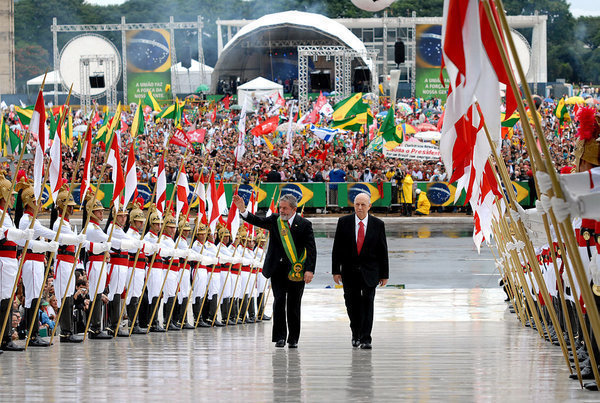 "Since we cannot beat these Communists by electoral means, I share with you this here."

With these aggressive words, a former South American president began to explain a conspiracy plan to other former Latin American presidents in a suite at the Marriot hotel in Atlanta, USA, at the end of November 2012.

The first stage of the conspiracy would be to start a campaign of media misrepresentation against the region's leftist and progressive presidents to undermine leadership. The media pressure would lead to the second stage: the initiation of judicial processes to interrupt the mandate of the rulers.

The Atlanta Plan would result in so-called "soft blows" - "overturned by political judgments preceded by corruption scandals, or campaigns aimed at ventilating allegedly questionable behaviors in the inner life of progressive leaders; Including, if necessary, family, friends or close associates".

The man in charge is Manolo Pichardo, a Dominican deputy and current president of the Permanent Conference of Political Parties of Latin America and the Caribbean (COPPAL), in an article published in March 2016 in the newspaper Listín Diario, Dominican Republic, entitled "The Atlanta Plan" Denomination that he gave to the continental plot.

In an exclusive interview with Pravda.Ru, the politician says that he witnessed the conversation "by chance". It was not the kind of meeting that pleased him. Pichardo, a leader of the center-left Dominican Liberation Party, was accustomed to attending meetings of the São Paulo Forum or COPPAL itself even before assuming his presidency.

Thanks to his friendship with a former president of Central America, he began attending forums organized by the Latin American Right and Center-Right, with the presence of world leaders and support from institutions such as the Global Peace Foundation, the Uruguay Leadership Conference, the Institute Patria Soñada and Fundación Esquipulas.

The first one that participated was held in 2011 in Brasilia. Debaters, he said, proclaimed "services" to the United States and accused Latin American governments of acting with unwarranted distrust of Washington. In addition, "the freedom of markets and the diminution of the state were praised". Pichardo's words at the meeting, criticizing social inequality and referring to the structural crisis of capitalism, ran counter to the discourse of the other participants.

"I remember very little about the 2011 meeting in Brasilia, I can say that there was a meeting of the continental leadership that corresponds, for the most part, to the interests of the conservative sectors of our continent, including former presidents. I, for example, spoke at a table with two former presidents of the region: an extremely conservative and a Christian center-of-mind, with moderate ideas," he recalls.

The other event that he attended was the origin of the Latin American Presidential Mission (MPL), a conference held between November 28 and December 1, 2012 at the Marriot hotel in Atlanta, which brought together former presidents from various countries and Leaders from different sectors of Latin America and the United States. At the end of the conference, the Atlanta Declaration was signed, a letter of commitment signed by former presidents who attended the 1st MPL Summit.

The Summit sought to "give impetus to a new era of international relations between the United States and Latin America," according to the communiqué issued to the press on November 30 of that year. In the same document, some former presidents of Central and South American countries are mentioned as participants of the 1st MPL Summit. Former Brazilian President José Sarney did not participate in the Summit, but communicated his support.

In the Atlanta Declaration MPL members advocate the "close ties" between Latin America and the US, "strengthening trade, investment, exchange of experiences and technology in the long term."

The private meeting in which the Atlanta Plan was exposed occurred prior to the signing of the Declaration. Pichardo decided years later to reveal the contents of the conspiracy by denouncing it in international forums and Latin American media.

"In fact, I never thought I'd talk about it," he says. "The idea of doing so arises after talking to some friends and comrades of my party who convinced me that, because of the gravity of what had been revealed, it was necessary to denounce it. I insisted that this would put in trouble those who invited me, but they insisted that the worst that could happen was the damage to the region, the rupture of the democratic order and the retrogression in the matter of the institutionality that allowed economic and social conquests ", completes the ex -president of the Central American Parliament (PARLACEN).

Involvement of the Brazilian media and a judge

In order to implement the Atlanta Plan, the former South American president who explained the plot to his peers said he had the help of the media, including mentioning Brazilian media vehicles. However, asked about the report, Pichardo says he does not remember exactly which ones were cited.

In his article of 2016, the Dominican politician affirms that also mentioned "some names of individuals connected to the judicial institutions of the region committed to the conspiracy". To Pravda.Ru, he reveals that one of the judges cited is Brazilian, but also does not remember his name.

"I remember that there was even a judge who could count on the execution of the plot. But I cannot remember names, because I came to that meeting by chance," he explains.

In his article, Pichardo questions whether the falls of the presidents of Honduras in 2009 and of Paraguay in 2012 would have served as a laboratory for future actions of the "Plano Atlanta" in countries of greater weight in Latin America.

"Manuel Zelaya and Fernando Lugo were test tubes to reach the rest, the [presidents or former presidents] of countries with greater economic weight of the region, until reaching the 'crown jewel', which is, without discussion, Lula Da Silva, the most influential leader, to his downfall triggering the domino effect they seem to seek?"

He tells this story that "knowing the details of the warp revealed or conceived in Atlanta, it is easy to deduce that what is happening in Brazil and elsewhere in the region where progressive leaders are persecuted or deposed in government is his execution". According to him, this operation succeeded after the trials that were the blows in Honduras, with military presence, and later in Paraguay, more perfected, by "institutional ways."

"It seems to me that the commitment to [destabilize] Brazil has to do with the weight of its economy and its influence in the region and in the world, we cannot forget that the South American giant is part of the BRICS. As an expression of the loss of Western hegemony Lula undoubtedly built a leadership that has influenced the region, a leadership that promoted regional integration schemes that give meaning to Latin American, which, more than a feeling of homeland, is a Project of Independence that pushes us to an agenda of our own that distances us from being the backyard of the United States. Lula, therefore, is a target."