To the International Community: Brazil asking for help

Since April 2016, our young democracy has been under threat in Brazil. PT, the left wing labour party, has consecutively won all three presidential elections from 2002 to 2014. In the last election, Dilma Rousseff, the first woman ever elected President in Brazil, was re-elected with 54 million votes. PT's election success made right wing, centre parties and the establishment increasingly unhappy and worried. 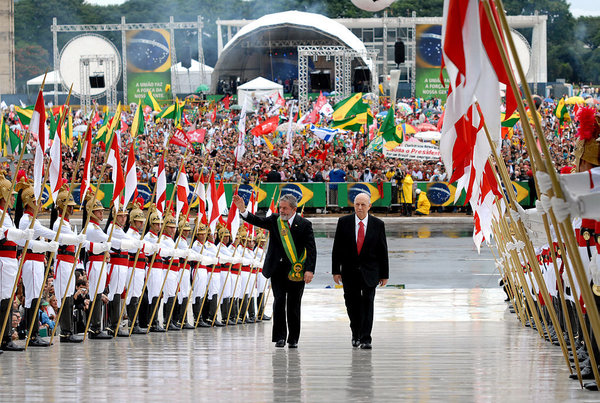 Taking the opportunity of a world recession in 2013, the population was called to the streets to voice their dissatisfaction with the then current government. These 2013 protests mark the beginning of an orchestrated opposition to Dilma's government.

As soon as Dilma's re-lection was confirmed in 2014, PSDB the losing party hired a team of three lawyers to request a presidential impeachment investigation. With strong partisan media support, PSDB did not find it hard to mobilize the higher classes of society, industry and bank bosses, as well as right and centre politicians and astonishingly Dilma's own Vice-President.

A judge from the lower courts in conjunction with right and centre-right politicians and the Vice President of Brazil decided to oust our elected President, blaming her Labour Government for the Brazilian economic crisis and fuelling a media campaign against her, plotted by neoliberal market interests.

The impeachment process of President Dilma Rousseff started in December 2015 and was finalised in August 2016.  Then the Vice-President Michel Temer took up his role as the new President of Brazil, resulting in Dilma Rousseff being ousted based on criminal responsibility. However, this is highly contested, since she was incriminated on a procedure previously authorised by the Finance Ministry institutions. The 54 million voters that elected President Dilma Rousseff in 2014 were left numbed by how the impeachment process was conducted, and the lack of any proved criminal evidence against her that could justify an impeachment. Curious to note, many politicians who voted to oust her, were being investigated by the Car Wash Operations (Lava - Jato), an investigation modelled on the "Manipulite" operations in Italy, which is taking part in a lower court of Curitiba by a limelight-adoring judge who so far has shown strong partisan intentions.

Dismantling of social and labour policies

However, as the months rolled on, it is becoming clear to right and left wing supporters now, that the main reason for Dilma's impeachment is the dismantling of social and labour policies with the three PT governments fought so hard to create and maintain. Thanks to the fierce debates and campaigns generated by the left wing senators in the Upper House in Brasilia and the dissemination of information by the alternative media, it is now becoming obvious to the majority of Brazilians that a cowardly plotted impeachment, without any true evidence of misconduct nor criminal offence of a legitimate President, is indeed a coup d'état.

Brazilian people are now waking up to current government decisions which are threatening social and labour policies, enforcing decisions against the majority of the Brazilian population. The current scenario resembles the so dreaded military dictatorship of the 60's when civil rights were curbed and unpopular policies were pushed and enforced on the Brazilian people without popular support. The socio-economic conquests made by Dilma and Lula governments and some key constituency policies are on the verge of being dismantled by shadowy internal and external interests, conducted by an illegitimate government with the complacency of a right wing partisan media and judiciary system. All with the support of numerous politicians denounced for corruption in the Car Wash (Lava Jato) inquiry.

Unfortunately, The Car Wash inquiry, which should investigate corruption, instead has been used to chase and persecute left wing politicians. Its venomous persecution of former president Lula being its sought-after golden grail. President Lula's policies have helped to lift millions of Brazilians out from poverty, an effort recognised by the UN. The way that the Lava Jato investigation has leaked private information about President Lula and his family (probably leading to the stress and early death of Lula's wife in February 2017) only reinforces Lava Jato's partisan tendencies and bad intentions.

Despite three consecutive years of Lava Jato's investigation, nothing has been legally proven against former President Lula. However, based on Lava Jato's many media appearances and declarations, it seems that their final strategy is to condemn Lula, humiliating him publicly and making him unable to participate as a candidate in the next 2018 election. This way, the judges will clear up the path to the rise of the coup plotters. And those involved in the Lava Jato who are not part of the PT labour party can then be freed up from further investigation, making it possible to place themselves firmly in the government spheres, a power stench that the Right Wing election losers crave for and where they will be able to walk in free from any Dilma's disturbance, giving continuity to a secular corruption. The systemic corruption in Brazil must be fought against hard. But the fight against corruption must not be used as a disguise to oust a democratically elected party, it must not be partisan, and it most above all not be used to implement an even more corrupt system in place.

It is important to highlight that the latest opinion polls reveal that, even with constant persecution from the media and coup plotters, Lula has increased his intention of votes to more 40%, if he is allowed to dispute the 2018 presidential election.

The Brazilian young democracy is kindly asking for help. The future of democracy in our country is under threat, and powerful corrupted forces are acting against it in our society. Brazil must return to the path of democracy, justice and social welfare.

The intention of these words is to alert the international community about the injustices currently undergoing in Brazil, a country that a few months ago was recognised and awarded by its socio-economic programs.

We would really appreciate if this text could be shared among readers. The world must know the truth. Thank you.