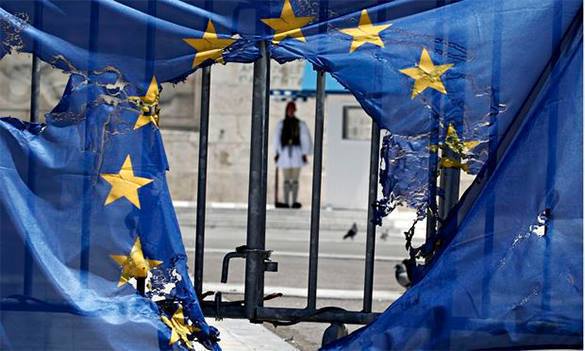 That the dead are not all the same is one thing sadly known. In the ranking list, Russian deaths are in the last place: we have been confirmed during the attack against the St. Petersburg subway, whose victims did not do in the West, for the big media, the same sensation of others, first of all those of the editorial office of the rag Charlie Hebdo. Not even the Syrian or Iraqi dead are all the same: if they were alive in the governmental areas, then they get a few rushing lines and are soon forgotten, even when their deaths are obviously incompatible with a revolutionary movement that has democracy and freedom as its real goals. But if they were in the territories occupied by the "rebels", well... they can even deserve 59 Tomahawk missiles launched in a rush of democratic decision-making by the nation who is the self-defined world sheriff.

This article concludes the interview with Leonid Savin, an exponent of the Eurasian Movement and a close collaborator of his founder, philosopher Alexandr Dugin.

History is moving fast and the developments of these days can outgrow the answers that are being read here.

Q) According to you Dr. Savin, who are the real instigators of the attack in St. Petersburg?

A) We need to analyze this attack in deep context. It is not only possible link with ISIS or any islamist extremist groups in Russia or abroad. At first Muslim separatism in Russia was promoted by the West (CIA, MI6) that affected in Chechnya and Dagestan in 90s. Lets remember that Al-Qaeda itself was possible with US assistance only. At second we need take in account global social environment and its influence on Russian society. Alienation and rise of individualism are also good soil for extremism in any form (first terrorists in Russian Empire were nihilists and anarchists). So we need to pay more attention to the phenomenon of lonely wolf terrorism too.

Q) Do you think that official reactions in the Western world have been fair towards Russia or are we still in front of two weights and two measures of which we spoke earlier?

A) It depends of country. Every country have own approach to counter-terrorism and also use it for own political goals. Some governments were in solidarity with Russia and some are not. But main problem for my opinion is some politicians were positive about last attack and some media (al Jazeera) promoted euphoria effect after news about attack in Russia.

Q) What actions can we realistically expect from Russia in response to this attack and on what fronts?

A) Mostly on domestic politics. On international level is difficult to achieve serious cooperation with the West. Our leadership proposed many times to work more closely on counter-terrorism issues, but the West keep silence. As you see many countries in EU also under attack, NATO and national security services are ineffective. It may lead to more problems there. But Russia has experienced to solve problems by itself only like before. Some partners also cooperating with us and sharing experience.

Q) Someone saw a sinister connection between the attack and Aleksey Navalny's political campaign, on which the West reserves the great hopes. But who is really Navalny?

A) State Dept. is behind him. Navalny was instructed there in USA many years ago. He is ex-businessmen involved in corruption schemes. He was judged and his brother now in prison. But he get real huge funds from the West for political propaganda and for the moment. I think that timing is very effective tool and planners from behind can manipulate by own puppets in Russia (or any other country where are their proxy actors) to organize swarm attack. It may be different kind of actions that seems not connected to each other, but in reality there is kind of master plan. In US military strategy it named cascade effects or effect based operations.

Q) Can Navalny ride a genuine desire for change by younger people who do not have a living memory of the past?

A) He do it. His group effectively use internet and false promises for mobilization. But enforcement agencies also works. Protest actions were organized in not right time. Now police and FSB can to check all nodes and main activists of his structure to neutralize them. Also some actions will be organized from pro-governmental organizations, labor unions, etc. At least there is scape goat - prime minister Dmitry Medvedev. Conservative camp and decision makers from energy and military sectors not likes him. His rating is very low now. And just before elections of president he may be used as "victim".

A) Yes, we are under such kind of attack. War by non-military means in process and we are object.

Q) The question that comes to mind then is this: how big is the Russian patience?

A) Historically Russia is very successful to run defensive wars, but it means serious damage ( human, material, territorial, etc. ). For now most of decisions depends of small group of persons and finally authorized by President. But in reality strategic and patriotic approach must be institutionalized. Cause in Kremlin and many governmental bodies we can see representatives of fifth and sixth columns - liberals, traitors and pragmatic persons (mostly) who can to change political direction very quickly. We have many good documents on paper (for example to use military force abroad to protect Russian citizens), but in reality such kind of legislation not used. It sabotaged or blocked by bureaucrats. We need new type of control what our bureaucrats are doing and how they follows presidential orders.

Q) Let's look to other parts of the world.... Iran wants to see recognition of his aspirations as regional power. What is the Russian attitude towards the Islamic Republic?

A) Now cooperation is going well. But we need more strategic ties. Many liberals here and in Iran not like it and want to be reoriented to the West. Also you need pay attention to Zionist lobby inside Russia. They are very active with counter Iranian efforts. I think that strong strategic alliance (bilateral or under umbrella of such organization as SCO) with Iran will be very effective and will impact on regional stability and security very well.

A) Syria: the West accuses President Assad whenever the Syrian army was in the lead on Islamic militants. Why do Americans and Europeans do not want recognize the mistake of supporting Islamic extremism?

A) Exceptionalism is main problem of the western consciousness. People of America can recognize many mistakes in the past (Vietnam, Iraq, domestic politics after 911, etc.) but leadership never do it. Huntington proposed formula - West and the rest. West on the first place. But in reality The Rest are majority of world population with many cultures, heritage and more effective politician ideas that western type of liberal capitalism and ontological racism.

Q) Will the Russian commitment in Syria decrease in a near future or increase until the final defeat of jihadist killers?

A) Russia was for long time in Syria. We have two military bases there (navy and air force) and supplement forces. Besides counter terrorism operations these points will be useful for our presence many years ahead.