Middle classes shatter the European Union from within

The West is in crisis, and the main victim of this crisis is the middle class. This is what most Western politicians say, and they all look for ways to extricate from the crisis rushing between universal human values of progress and pressing needs of American and European philistines, who want simple and effective solutions "here and now." Historically, such situations lead to a series of wars, revolutions and other "great upheavals." 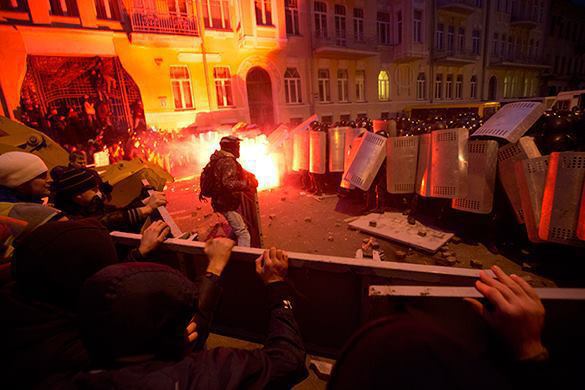 To understand the essence of what is happening in Europe and America now, it would be convenient to turn to the Marxist analysis, according to which the "middle class" is called "middle" because it takes a place between the proletariat and the big bourgeoisie. The modern-day middle class, unlike the "petty bourgeoisie," consists of not only farmers and small proprietors (shopkeepers, entrepreneurs, etc.), but also clerks, "cubicle rats" and members of their families, including students. In Russia, this class has traditionally been referred to as "petty bourgeois," with a negative connotation.

When Russia was embarking on the journey to "market economy" and "democracy," stories about beneficial effects of the middle class on society were in vogue. During the 1990s, it was believed in Russia that the middle class was conservative, democratic and mobile in nature. Many Russians would often say: "Look at how everything is good, understandable, predictable, manageable and progressive in Europe and America! This is all because the middle class takes a dominant position in the structure of their societies."

However, unlike Marxists, propagandists of petty-bourgeois virtues did not say a word about the fact that the middle class is weak, cowardly, hysterical and prone to dictatorship by nature. To see all these hidden qualities clearly, one only needs to frighten petty bourgeois. And then, in a moment, the class that serves as the basis of stability, prosperity and social peace turns into a terrified and hysterical monster that only wants its peace back at any cost.

If we approach the current events in the USA and the EU from this point of view, we can see that the transformation is already in progress. Farmers, skilled workers, professors, entrepreneurs, shopkeepers, students - all are frightened. They have lost confidence of the future. If there is no such confidence, the middle class loses ground immediately.

In Europe, the triumph of the logic of capital was reached in 1997, when EU countries signed the so-called Stability Pact. The document imposed a strict financial discipline on European countries, even though they did not observe it. The discipline was based on the basic rule of liberal economy: the fight against inflation. Stability of prices and low interest rates for bank loans are the centre of this policy. For this purpose, Europe sacrificed the principles that it had gained in previous centuries, namely: the priority of employment and the struggle against unemployment. Low inflation and low unemployment are incompatible, and one can avoid this contradiction by shifting negative consequences of the choice onto external, weaker partners.

For almost two decades, the West has been exporting side effects of liberal economy to Africa, Asia, the Middle East, Latin America, the countries of the former USSR and the countries of the "new Europe" (the former "socialist camp"). This could not last forever, and poverty that had been accumulated over the years "on the periphery," broke its banks and struck "good places," the EU and the USA.

Arabs, Poles, Romanians, Yugoslavs, again Arabs, Afghans, Africans, Bulgarians, Arabs yet again and Africans - millions of these hungry, ready for any work people flooded the streets of big and small cities, towns, villages in an instant.

The first thing that they immediately ask for is to get rid of millions of migrants. Westerners want their stability back, they want to have their future back too. If it is impossible to do for all, then they can try and do it for separate countries. This is how the world saw Brexit, Trump's victory, the rise of the National Front in France, Alternative for Germany, etc.

Paul Manet, the head of the government of the French-speaking region of Belgium, describes the situation as follows: "The problem of Europe is that it has lost the support for the middle class. Farmers are exposed to dangers of the completely liberalised market, industrial workers are exposed to global dumping, clerks suffer from effects of austerity policies. Who remains among the middle class to defend the fully liberal European Union? No one!"

Donald Trump used the same logic of reasoning in his election campaign. He spoke in defence of the American middle class - the people that have been losing their jobs due to liberal trade policies and flows of migrants, unable to pay for medical and educational services. Trump's first speech in Congress clearly shows that Donald Trump was elected by the middle class in the first place.

America has a force that can resist the ideology and practice of global liberalism: this is the strong national capital, which Trump personifies. Europe does not have this force. National framework was too tight for the capital, so it gave rise to the EU. Europe has never become one single nation, and one can see the European Union falling apart.