European intellectual and political impotents want to stay together

Prior to the EU Summit on Malta that opened on February 3, President of the European Council Donald Tusk published a depressing open letter to the heads of EU countries. In a nutshell, Tusk wrote that Europe was surrounded by threats, and its unity was in question. Never before, since the signing of the Treaty of Rome in 1957, Europe has found itself in a more difficult situation, says Tusk. What does Tusk mean? What threatens Europe? 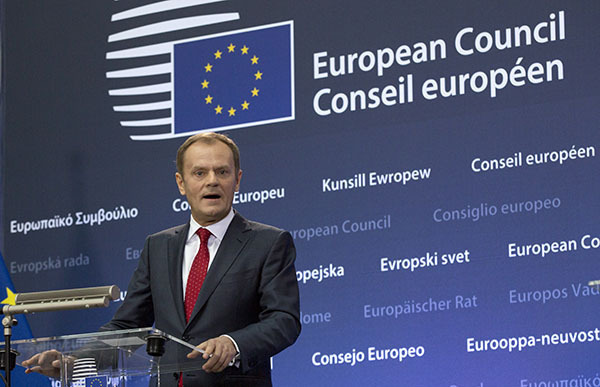 The list of threats includes the "increasingly multipolar" external environment: the "assertive" China, "aggressive" Russia, wars, anarchy, terror and "radical Islam" in the Middle East, as well as the new American administration that makes the future unpredictable. The author puts emphasis on the fact that it is changes in Washington that lead to most negative consequences for the EU. After all, (OMG!) the new American administration calls into question 70 years of principles of foreign policy the United States.

Inside Europe, according to the apt remark of Donald Tusk, there is a threat of national egoism and centrifugal tendencies growing. European elites can not do anything to oppose this, because they have lost faith in political unity and questioned fundamental values ​​of liberal democracy.

One shall admit that the diagnosis is correct. Donald Tusk, may well be considered one of the most honest European leaders, because no person from his camp has ever dared to be so open.

European elites have showed themselves as intellectual and political impotents. It is their inaction that led to the current situation in Europe. They failed to fulfill the functions of the elites - to think, analyze, predict, formulate goals and use their will to achieve them.

Donald Tusk's open letter reflects blindness, stupidity and lack of will of the European elites. To see this, one has to look at whom they nominate as their leaders in this critical moment for the European Union.

Germany. Who runs for the post of the chancellor? Angela Merkel from rightist forces and Herr Schultz from Social Democrats. Merkel fully embodies the period that has taken Germany where it is now - the dead end. Can Merkel find answers to questions of today?

What about Martin Schulz, whom Silvio Berlusconi compared once with a concentration camp guard? Schulz is another representative of the past, like Merkel.

France. There's Fillon, who does not look convincing for the role of a national and European leader. There is another candidate - Benoit Hammon, who promises all French citizens 750 euros every month for no reason just like that. Hammon is ready to legalize marijuana and cut the working day in France. Do the French really care about the time they need to smoke weed, or is their primary concern is to distribute immense and ever-increasing wealth? France and Germany are swirling in the midst of the refugee crisis, but the first thing they think is how to legalize marijuana?

Interestingly, Tusk does not say anything about migrants in his letter. Yet, he screams and shouts about Russia, China and the USA.

Merkel, Schultz, Fillon and Hammon are the people whom Europe has in its arsenal to counter  Trump, Putin, Islamists and China. Where is Europe? Where are European leaders? Where are ideas?

The likely new US ambassador to the EU said that the euro would vanish in 18 months. Romania sinks in corruption. In Romania, however, corruption has not become a part of "respectable" European corruption a la Madame Lagarde, who was found guilty, but was not punished. When integrating Eastern European countries, the Europeans will have to integrate their corruption. Do the Europeans realize that civilized Europe may not be able to handle this?

Nationalists like Marine Le Pen can only dismember Europe and settle in their own "kingdom." All they can do is escape responsibility for Europe on the whole. The French want their border control back, but what if they are no longer allowed to freely travel to Germany, Spain, Italy, etc? They will not tolerate such a move. In a nutshell, if you want to see what may happen to Europe if nationalists come to power, you can take a look at Ukraine.