Donald Trump wants Henry Kissinger to save the world from war

The Kremlin considers former US Secretary of State Henry Kissinger to be one of the wisest politicians who has deep knowledge in the sphere of Russian-American relations. At the same time, the applicability of Kissinger's experience depends on the American administration, Putin's official spokesman Dmitry Peskov told reporters Tuesday, commenting on the information that earlier appeared in the German newspaper Bild. The publication in particular said that the 93-year-old former head of US diplomacy could mediate between Moscow and Washington during the presidency of Donald Trump. 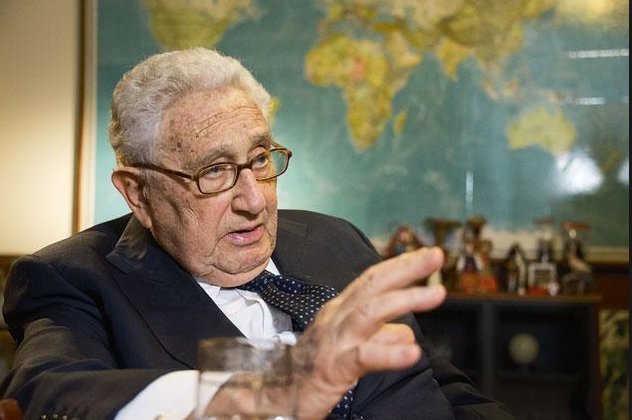 "Of course, Kissinger is still one of the wisest politicians and experts. Among other things, he has profound expertise both in Russian affairs and in the field of US-Russian relations," Peskov said, TASS reports. "If his expertise and extensive experience that he has gained during decades of work is in demand today, we would only welcome it," Peskov added.

"But, of course, the relevance and applicability of this experience is not our business. It is up to our American colleagues to decide and we can not interfere in this," the Kremlin representative said.

According to Bild, Donald Trump was trying to attract Henry Kissinger to prevent another cold war that may break out because of intense relations between the USA and Russia. The German newspaper referred to sources in the team of the US President-elect and European special services.

According to the newspaper, Kissinger appears as the author of a plan to resolve the crisis in Ukraine. The article said that Kissinger could act as a mediator between Moscow and Washington to help Trump get closer to the Kremlin.

Kissinger supposedly offers to improve relations with Moscow, to thus create a counterweight to the growing influence of China. The balance between America and Russia, Kissinger believes, should strengthen stability in the world.

A report from Western European special services, to which the newspaper refers, said that Donald Trump was committed to lifting sanctions from Russia "on Henry Kissinger's advice." In addition, the ex-Secretary of State allegedly advises the President-elect should recognise Russia's dominance in former Soviet republics.

As for Ukraine, Kissinger allegedly suggests developing a plan, in accordance with which Russia should guarantee security in the east of Ukraine, and the West would not raise the Crimean issue anymore in return.

According to Politico, Trump's aides declined to comment on his relationship with Kissinger. According to sources, Trump admires Kissinger, as well as other national leaders of previous times, such as Robert Gates and Condoleezza Rice.

Kissinger's partners maintain contacts with other individuals in the area of Donald Trump's  ​​influence. Reportedly, Henry Kissinger's senior aide, Thomas Graham, also appears among possible negotiators in the interim administration as a possible candidate for the post of the US Ambassador to the Russian Federation.

Henry Kissinger served as the US national security adviser in 1969-1975. From 1973 to 1977, he took the post of the US Secretary of State. Kissinger is known as one of the ideologists of the policy of detente. In 1973, Kissinger was awarded the Nobel Peace Prize for his role in the conclusion of the Paris Agreement on Ending the War and Restoring Peace in Vietnam.