USA to do away with another regime 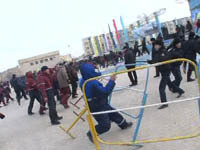 Despite the arrival of additional forces in western Kazakhstan, the danger of new riots in the country still preserves. On December 16, mass riots sparked in the town of Zhanaozen and continued the following day. Unrest was noticed in another town of the same region - Aktau. News agencies said that the people, who gathered on the central square of the town, were holding slogans saying "No to repressions, we are not looters!"

The protesters burnt 46 buildings and hundreds of cars. Law-enforcement officers used firearms against the protesters. Up to 17 people were killed and dozens were injured in the riots.

Kazakh President Nursultan Nazarbayev introduced a state of emergency in the republic. The president restricted traffic, photo and video shootings and banned meetings. The curfew will stay in effect before January 5.

News agencies said that the protests were organized by employees of oil companies. The people reportedly protested against the violation of their rights, including delayed salaries. Some Kazakh bloggers say that the payment delays were not the main reason behind the protests. Moreover, they said that the average salary for an employee of local oil enterprises made up more than $1,500 a month. Some sources in the law-enforcement structures of the country said that the riots were plotted by Islamists.

This way or other, the unrest strangely coincided with the 20th anniversary of independent Kazakhstan. Most likely, the coincidence is not incidental. Islamists had been conducting subversive activities in different territories of the country since the spring of the outgoing year. Armed clashes occurred presumably in the north-west and in the west of Kazakhstan. Shortly before the most recent events, they had distributed an ultimatum, in which they threatened to flood Kazakhstan with blood.

The chairman of the Islamic Committee of Russia, Geidar Jemal, predicted a serious aggravation of the situation in Central Asia. The most pessimistic forecasts, which the expert described in an interview with Pravda.Ru, seem to come true. We asked Mr. Jemal's opinion again in an attempt to find out how the situation in the region may unfold in the future.

"The situation in Kazakhstan is unfolding within the scope of the implementation of another color revolution program. The Kazakh regime may collapse as a result of the struggle between various groups - from liberals to Islamists and the regional elite. It may happen in the near future, even before Nazarbayev leaves office as president.

"Why does the West need to ruin Nazarbayev's regime? His regime is not against the West or the USA in particular."

"It's because the USA continues to topple the regimes, which appeared before the events of September 11. Moreover, when world leaders rushed to express their condolences and loyalty to Bush after the 9/11 attacks, Nazarbayev was one of the first to do that. He could count on America's support, but everything changed. Bush's attempts to establish the global reign of the United States have failed to reach the results Washington desired. Obama arrived in Cairo and announced the new US approach to global issues. He said that the USA would reset its relations with the Islamic world. The reset stipulated a completely new format for the previous political field, as well as a liberation from those, who put obstacles for that. It goes about the representatives of authoritarian regimes, who conducted repressions against Islamists. A new format was expected to touch upon Nazarbayev's regime too. The US administration is ready to support those who destroy the regimes that have become unnecessary.

"Why did the USA choose Kaakhstan as a platform for destabilization? Why couldn't it be Uzbekistan, where the authoritarian regime is much stronger?"

"It's because of Putin's ideas about the Eurasian Union. Putin has virtually reanimated Nazarbayev's previous ideas. The Kazakh president put forward the idea of the joint Eurasia during Yeltsin's era. It is not ruled out that Russia's intention to strengthen its influence in Central Asia made the USA revise its regime-change plans. The events mean that the Americans have already launched the hostile plans against Moscow."

"The riots in Kazakhstan were arranged by the employees of oil companies, who could not be regarded as impoverished people. How can you explain that?"

"There are several reasons for the recent riots in Kazakhstan. First off, many people in the country are tired of Nazarbayev. The lion's share of Kazakhstan's riches goes to a small group of people. Eight oligarchic groups hope to gain profit after the collapse of the current regime.

"Secondly, one should take into consideration the fact that the west of Kazakhstan is the territory which is not involved in the distribution of the riches. The people who inhabit this territory are traditionally strong and brutal in their actions. The authorities produce oil on that land, but shares practically nothing with the people who live on those territories. The people do not want to tolerate that."