Where Austria turns, there Europe follows

First round of presidential elections in Austria was won by Norbert Hofer, representative of the Freedom Party, one who stands for abolition of sanctions against Russia, and a referendum in Donbass. The Austrian media writes that Hofer is a frontrunner at the second round and it's a turning point in the Austrian politics. Where Austria turns, there Europe looks. 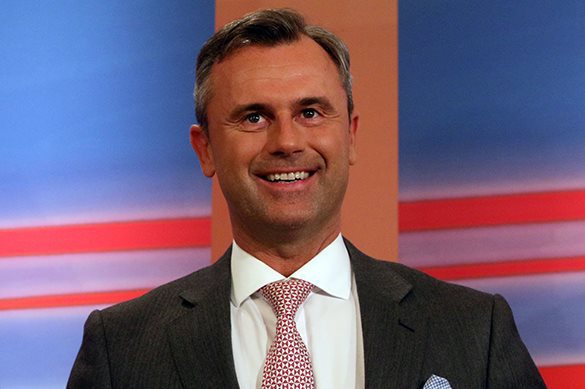 Austria as a leading EU state

Austria has been a founder and old timer of the EU since 1955. this small country has always shown high living standards, its economy is tightly integrated with the German and is a basic one in the EU.

However. Austria has been loosing ground lately, its economy is in stagnation, unemployment rates rise, tax load reached its top, the WIFO and IHS economists say. 2015 was not successful, the GDP rise made up only 0.7%, Der Standart reported.

Real salaries have not increased for the sixth year on end. Investments are attracted but at a low level, large companies show pessimism regarding their own development. Unemployment is expected to increase from current 6.1% to 10.2% in 2017.

And that is in a sector of non-qualified jobs, where there are a lot of willing to find job among migrants. Austria adopted about 50,000 refugees last year and will adopt the same number this year. Competition in the labour market enhances social tension. According to the latest survey of the IMASA, 72% of the Austrians want a more harsh policy of the government towards refugees.

Thus, it's no surprise that a landslide victory was gained by an opposition member Norbert Hofer, who got about 37% of the votes.

Both candidates from the ruling coalition, Rudolf Hundstorfer from the Social Democratic Party and Andreas Kohl from the Austrian People's Party did not enter the second round. It has happened for the first time since the end of WWII. Voters consider them guilty of the current situation.

"It's beginning of a new era," Heinz-Christian Strache, Chairman of the FPÖ claimed. "It's absolutely evident that voters are utterly disappointed with acts of the current government. I'm sure that Norbert Hofer will defend interests of the Austrian people as he becomes a President".

It should be noted that the FPÖ advocates orthodox family values, euroskepticism, and has a hard stance on migrants. "I don't want Austria to be a Muslim country," Hofer said. It's a third force in the current parliament, its rating is rising, and is reaching 40% as we can see.

The truth about the SPÖ and ÖVP is simple: the time is up, the Austrian Die Presse wrote.

"The following elections to the house of representatives will be held in 2 years, but taking into account government's disability to settle urgent problems regarding unemployment, economic growth and education, discontent will be rising. On Sunday ¾ of the voters said that they were either discontent or even outraged at the government's acts," Neue Zürcher Zeitung wrote.

Another Austrian Wiener Zeitung compared two old timers of the Austrian politics with painful lose of the Austrian professional team to an amateur team of the Faroe Islands in 1990 at the European Championship. "Both ruling parties experienced their own Faroe moment this Sunday. One or two years ago such things seemed to be unthinkable."

It should be noted that the Austrian President is Commander-in-Chief of the Armed Forces, he has right to appoint the federal chancellor of the country, as well as members of the government. He is also in charge of the foreign policy. Vienna was in tune for a constructive dialogue with Russia under the former president Heinz Fischer as well. Fischer was an adherent of the South Stream and advocated lifting of sanctions against Russia. And if Hofer wins the second round, these positions will be increased.

He claimed in March that the Crimea should have been Russian after the USSR collapsed. Moreover, the presidential candidate believes that such a referendum could be held in Donbass. He is sure that Europe should treat this problem in a pragmatic way and gradually lift anti-Russian sanctions.

"There is much more of this affection towards Russia in Austria than in Germany," Alexander Rahr, Scientific Director of the Germany-Russia Forum told Pravda.Ru. "Elites and people of Austria keep in mind that the Soviet army left Austria after the WWII, and it became neutral".

Thus, Austria has always had good relations with the USSR. And now business relations of Russia and Austria are quite well arranged. Austria has a friendly mood, but it can't be regarded as a pro-Russian stance. However, on the other hand, one can stake on anti-Americanism in Austria, Alexander Rahr noted.

"Social democracy disappears in Europe. And the conservative parties are not so attractive at the elections either. Those are right parties and the greens, who advocate humane attitude to refugees, that are attractive. Thus, polarization of society is taking place, it becomes more difficult to reach an agreement.

And unless the ruling parties manage to assure the European population that the EU project is not an elitist, but a popular one, elections will be won by outsiders, radical parties, eurosceptics, and so on". Europe faces hard times, it experiences a critical moment, the political scientist concluded.