The Way of the Warrior: Legio Patria Nostra

Among the various figures of the Warrior, or maybe warfighter if someone prefers, there is also room for the Legionnaire, the Stranger, the French, by definition. The one immortalized in old black and white movies with a flavor between the romantic and the tragic or in some noisier and ramshackle Hollywood works. 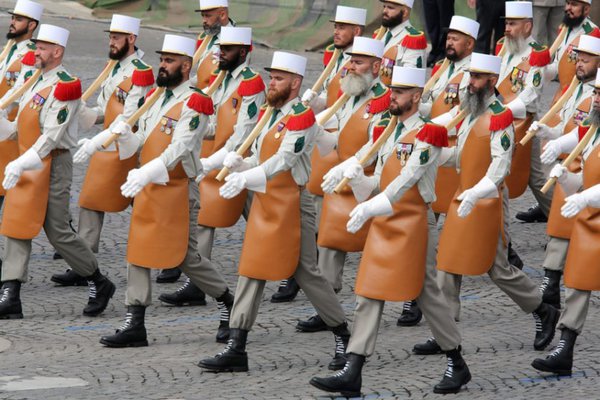 Yes, we cannot deny it: the French Foreign Legion has always exercised an enormous fascination in the collective imagination and a lot of men served in the ranks of the Legion, for different reasons and with different destinies. Adventurers got an outlet, all the others that life had instead severely beaten, a second chance.  Why this interview? I just finished reading the book Never be afraid by a fellow countryman, Danilo Pagliaro, who signed for the French Foreign Legion in 1994 at 37 years of age. Now at two years from his retirement, with the rank of Chief-Brigadier, Pagliaro has written a book that I do not hesitate to define simple and honest. Even touching. Pagliaro, an unrepentant legionnaire as he defines himself, opens his heart and in some pages of the book makes us part of his more intimate experience.

Q) Brigadier-Chef, what is the French Foreign Legion in the reality that you have lived from the first day of your enrollment?

A) I quickly found an active, lively environment, always in motion. It was the time of the war in the former Yugoslavia, so Units went over there but also ensured the presence during field missions in Africa, Central African Republic, Chad, Gabon, Western Sahara. Since the arrival at the destination Regiment you began with the various activities that rhythm the Legion Combat Units. Every month we went out for the trainings in the real environment, for a few days. Every month we did marching of two or three days, we went to the firing range. And then there were all the training activities and stages.

Q) Why did you choose the Foreign Legion? What did you look for you could not find in your daily life here in Italy?

A) I could not find a security, nor work, nor social. First of all I chose France because it guaranteed a social security, an aid that in Italy did not exist even remotely. Later I found out that there was the Foreign Legion and I had the opportunity to do what I always wanted to do. The Legion has given me the opportunity to be able to recruit, at almost 37 years, when in Italy I would be too old to do any competition for a public employment. France and the Legion have opened up a world where you do not need to know someone, where meritocracy reigns, where you can get everything if you put the effort they need, where you don't need be pushed, endorsed, recommended. In Legion I managed to get in to my merits and my strength and my abilities, while in Italy, when I was in my twenties, I had discarded from the contest to enlist in the Police for varicose veins!!!

Q) How has your mood going from the training in the barracks to the reality of the battle field?

A) I would not know. Surely harder. As you has been trained yourself, nothing can prepare you to the first time that you find yourself in a dangerous area. Everything is different, all the parameters are different. It is not necessarily the fear of taking a shot. In Cameroon, at a certain moment, I was terrified by the idea to make me bite by a green mamba during sleep, because there were everywhere and I realized that the folding camp on which I was sleeping did not isolate myself from the outside. You also become fatalists. In Ivory Coast, I realized that if, at times, the rebels at a places of obligatory passage wanted to open fire, we would have simply died without being able to do anything to react or defend ourselves.

Q) Deserters or "solvers of a contract"? Who are the people who run away from the Foreign Legion?

A) People fleeing the Foreign Legion are deserters and not "solvers of a contract". It's important to clarify this well. Already at a basic level, the military work is not comparable to a job in the civilian life and still is, even in civilian life, if one wants to quit an employment relationship, is obliged to give advance notice. In the Legion should be at least the same, so if a legionary wants to leave, he should at least follow the procedure and to be fair to the institution, making the regulatory demand for the acquittal of the contract. Instead it often happens that when a legionnaire has decided that he want to leave, he packed his belongings and disappears. Simply disappears, or does not return from a permit, a license or a free exit anymore. Who are these people? They are definitely people totally immature and absolutely despicable because they have no sense of duty, honor, dignity. The given word, the signature put on a contract should be honored forever, but if really there are real problems that need to terminate the contract, they should have the honesty and correctness of doing things in a "clean" way. Instead, unfortunately, of vile beings, vile and disgusting who are guilty of desertion, there are regularly.

Q) Can you tell us what is the deeper meaning of the motto Legio Patria Nostra?

A) The meaning is that you do not go in the Legion because you want to, but because you have to. At least, before it was so. Today hordes of idiot kids depart to join thinking they come to play soft air, or they want to do real men, or they speak of values, ideals but when they just come to Aubagne they ask to leave because they cannot keep the computer or they cannot call home. When you are really enlisted into the Legion, you do it because you have to, because you need to enlist, to begin again, to start a new life, again. You leave everything behind and you are introduced in this new world of which nothing is known. You begin to learn the language, you meet new people, make new friendships, you learn songs, customs, traditions completely new and common to all the legionaries in this new family, in this new country. Legio Patria Nostra is the sense of the new family, is the sense of the new membership of a country that thinks at you like one of her children, and that was freely chosen by each legionnaire.

Q) In the epic of the Legion, Camerone has a special place. Do you want to remind our readers that battle?

A) In 1863 France sent an expedition to Mexico and the Legion was part of this force. On April 29, a company of legionaries was sent to meet a convoy that was to lead to Puebla money payroll, material and munitions for the siege of the city. At dawn on April 30, 1863 the Mexicans had their first contact with the third company formed by three officers and 62 non-commissioned officers and legionnaires. To fix the enemy, Captain Danjou commanding the company decided to barricade themselves in ranch Camerone, a tiny village. The legionaries were faced by 2000 Mexicans and Captain Danjou, during a break in the fighting, swore in front of his men that he would fight to the death and asked his legionaries to take the same oath. In fact, after the death of the Captain, the legionnaires continued to fight to the last, although now the convoy had passed and even if the Mexicans repeatedly ordered the surrender. In the final assault, only three legionaries remained standing who refused to surrender and finally they accept the surrender on the conditions of keeping their weapons and that the Mexicans take care of their wounded comrades. It is famous the response of the Mexican Colonel that said "Do not refuse nothing to men like you".

Q) In these days there is still space for a bravery like that of Camerone?

A) Yes, of course. Camerone is the cult of the mission. Not celebrate a victory or a defeat. It celebrates the sense of duty, the sense of honor, the sacredness of the word, of a commitment. In our code of honor is recited "La mission est sacrée", the mission is sacred! And do Camerone not need go to war. Do Camerone means doing what you must, to successfully complete the mission had, no matter the mission. It can be an assault to the death or can be a chore of cleaning the toilets. The Camerone value lies in the coherence, in the cult of the work and of the mission done, and done right, respecting promises and commitments. Do Camerone means to be faithful to your comrades, your friends, do not leave them alone, be united, be in solidarity.

Q) Times change, people change: how do you see the future of the Foreign Legion?

A) I see it complicated. Many things have changed or are changing. The current morality, the sensitivity of the people have changed. Our whole scale of values has changed in recent years. You want to bring the profession of arms to have the same status, the same rights of workers of civil life. There is a feminization phenomenon, there is a phenomenon of Islamization of our society and the Armed Forces. All challenges that the Legion will have to face and to take into account. Surely there were many other moments probably worse than this. Certainly the Legion will overcome this moment of transition. This is beyond any doubt. But it is sure that the present time is a special moment and the near future will be a period of change and adjustment to the new realities of the 21st century.