The recent elections to parliaments of three lands in Germany were dubbed as the turning point in the political life of the country. German voters have expressed distrust to political old-timers - the Christian Democrats and the Social Democrats - the CDU and the SPD. A young party of eurosceptics - Alternative for Germany (AfD) is coming to replace them. The party advocates Germany's friendship with Russia. 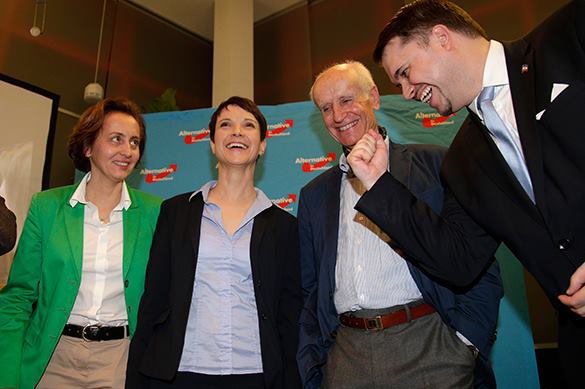 Thus, it is clear that the success of AfD is not incidental. The CDU won only in Saxony-Anhalt, where the Alternative for Germany came second. More importantly, it will be the first time when the AfD wins seats in the parliaments of all the three territories.

It turns out as a result of the elections that the policy of the broad coalition of the CDU/CSU and the SPD raises serious concerns among not only those who are opposed to refugees, but also with those who think that refugees may improve Germany's demography. This is evidenced by the victory of the "Greens" in Baden-Württemberg - this party is even more loyal to migrants, than the CDU.

"Whether it is east or west, whether it is the wealthy Baden-Württemberg, the poor state of Saxony-Anhalt or the rural land of Rhineland-Palatinate - the elections were held under the common denominator in all these territories. This is the success of the AfD and the separation of right-wing populists in the German party system. This is a shameful and dangerous common denominator, because those were de facto mini-federal elections," Spiegel wrote.

"These elections will be reflected in the history of Germany. They have looked into the future of the German democracy. They have showed how the old party system will continue to break," sueddeutsche.de said. The newspaper draws attention to the danger posed by the victory of the AfD, especially in eastern states.

"This party is home to aggressive nostalgia and rough bourgeois. In the west of the country, it is rooted in the broken right wing of the CDU, while in the east it appeared from the radical party close to the NPD (National Democratic Party of Germany, far-right party - Ed.) The problem of migrants will determine Germany's policy for a long time, and probably under much more adverse economic, social and financial conditions than presently," concludes the newspaper.

"Angry German voters have ruined the old party system. The phantom of Weimar (Weimar Republic led Hitler to power - Ed.) is coming from the east of the republic while gaining strength with the support from both the left and the right. The south is experiencing the collapse of the SPD, and the CDU, the golden mean of Germany's post-war policy, is falling apart. The chancellor was guided by the humane imperative towards refugees for too long," the Münchner Merkur paper said.

The second coming of Hitler in Germany possible?

"The Alternative for Germany has achieved impressive success in three years. It has evolved from being a novice in politics to the level of the federal party, - Vladimir Olenchenko, a senior officer at the Center for European Studies, Institute of World Economy and International Relations at the Russian Academy of Sciences told Pravda.Ru. - There are smart organizers in the party. I would say that there is a combination of populism and good organization in this party."

According to the expert, east Germans are more sensitive to what is happening in the country. Consequences of migration in Germany are a lot more painful for east Germans, the expert believes. The Greens won in Baden-Württemberg because the social policy of local authorities were more reasonable than that of the CDU.

"I do not think that the popularity of the Alternative for Germany poses a threat to the democratic system in Germany," political scientist, Professor at Berlin Free University, Oskar Niedermayer said. "The AfD is not a right extremist party. There are certain politicians, who can be referred to as such, but not the party in general. It is the National Democratic Party of Germany that could pose a threat to the German democracy, but this organization does not play a significant role in the country and is likely to be banned soon," he said.

AfD leaders strongly reject accusations of right-wing radicalism. According to them, the party unites supporters of liberal market economy, traditional family values ​​and direct democracy on the Swiss model that, among other things, envisages regular use of referendums. Therefore, they consider their party a conservative, liberal-conservative or national-conservative political organization.

It is worth noting that US-owned German media do their best to stop new people on the way to ruling circles in Germany as they may take friendly moves towards Russia. This is something that Washington does not want to happen.