Indignation at the murder of Berta Cáceres

Berta Caceres, indigenous leader, representative for more than twenty years of the Civic Council of Popular and Indigenous Organizations of Honduras (COPINH), was murdered in the early hours of Thursday, March 3, while sleeping at her home in La Esperanza, Intibucá, about 188 km from Tegucigalpa, at the hands of "unknown" armed men. 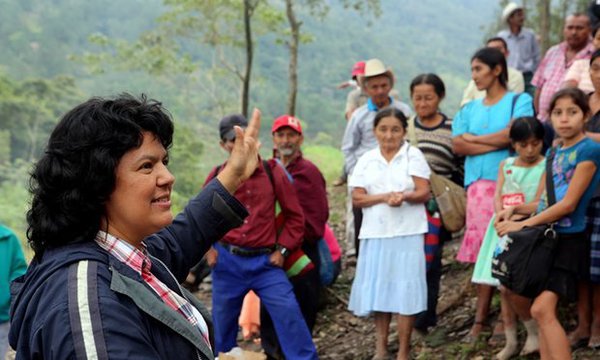 Besides being an iron defender of the peasant movement's rights and indigenous peoples in Honduras, Berta Cáceres stood out as a social fighter both at the regional and continental levels, in defense of social and environmental justice, particularly in the resistance against the mega mining and hydroelectric projects.

The hand of the lobbies

In addition to identifying clearly the Free Trade Agreements as part of the same gear that ensures impunity for transnational companies, Berta fought for better programs for the well-being and health of the land and against patriarchy and violence. She opposed the coup of June 28, 2009, since for COPINH the coup put an instrument of violence in the service of transnational corporations for the plundering of the commons and the repression of social organizations which opposed this. She was also a firm opponent of the facilities of US military bases in the territory of the Lenca people.

In April 2015, Berta Cáceres was awarded Goldman, one of the most prestigious awards in the world related to environmental issues, awarded for her collaboration in defense of the Lenca territory threatened by the harmful consequences and violence of the construction of the hydroelectric Water Zarca Project, transnational Chinese Sinohydro and the Honduran company Desarrollo Energy SA (DESA). The people of Lenca for many years had been denouncing the violation of the right to water as a source of life and culture before the hostilities.

Berta Cáceres was the mother of four daughters and due to precautionary measures of the Inter-American Commission on Human Rights (IACHR) should have enjoyed special protection from the Honduran government. However, Berta was murdered by a state that protects the interests of local capital, transnational companies seeking to seize the territories of the commons. Her fight for life, her fight for the most needy, for those that were taken to court, persecuted, threatened, motivates us today.

Repeatedly the Honduran leader said she had received death threats in the context of widespread violence: 11 environmental activists were murdered in Honduras between 2002 and 2014, claimed the report "How many more?" Prepared in 2014 by the British NGO Global Witness. This puts Honduras as the country with the highest rate of violence among 17 countries analyzed and demonstrates the architecture of violence and impunity for mega-mining, hydropower business, among others, in favor of private capital and complicit governments. According to Honduran NGOs ACE-Participates (Association for citizen participation in Honduras), more than 90 percent of the murders and abuses of human rights defenders in Honduras remain unresolved.

We demand of the Honduran government:

To end impunity and to investigate the murder of Berta Cáceres and all the comrades who fought for social justice and the environment;

To suspend all projects denounced by human rights defenders, including the hydroelectric project Zarca Water in the river Blanco y Blue Energy in Cangel river;

To withdraw businesses and institutions construction or project financing where there has been denunciation of human rights violations and where there was no prior consultation, in accordance with Article 160 of the ILO;

That it ends the persecution and criminalization of those who defend human rights and to comply with the precautionary measures of protection.

We express our deepest condolences to the families of Berta Cáceres, all her companions and the people of Lenca who have struggled through such terrible events.

We call for the mobilization of the citizenry and the immediate denunciation to the embassies and consulates of Honduras in the world to demonstrate our condemnation of this crime and our demand that justice be done.

* To join send a message to:

* All signatures collected in the early days will be used both in the demonstrations to be held in front of the consulates and embassies Honduran as the Session of the United Nations Human Rights Council that will pass next week in Geneva.