Turkey has survived two terrorist attacks in two days. The deadly attack in the Turkish capital of Ankara has claimed the lives of at least 28 people. The following day, militants attacked a military convoy in the south east of the country. Is Turkey going to use these two attacks to invade Syria? 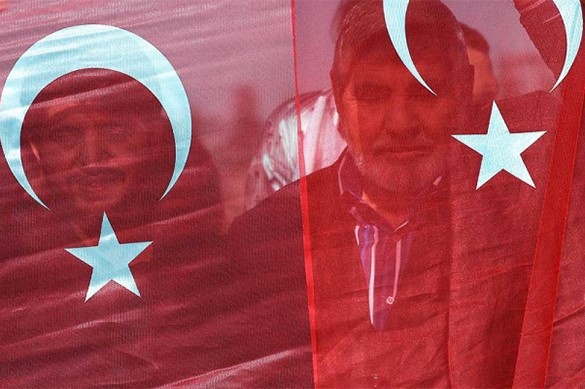 Is there a possibility for a direct military confrontation between Russia and Turkey? What global plans does Turkish President Erdogan harbor? Pravda.Ru meets Doctor of Political Sciences, Professor of the Moscow State University, Andrei Manoilo, to talk about these issues.

"The Turkish authorities did not comment on the report from the Russian Defense Ministry about  the preparations that Turkey conducts to invade Syria. Instead, Turkish officials continued the anti-Russian rhetoric. Turkish Prime Minister Ahmet Davutoglu said that Russia was committing crimes on the territory of Syria. The Russian Defense Ministry warned Turkey that Russia would take measures against Turkey in the event Turkey takes hostile actions against Syria. Is the situation going out of control?"

"Of course, such bellicose statements mean that tensions in the Russian-Turkish relations have grown. The statements that have been made became an exchange of warnings. Russia has publicly announced its knowledge of Turkey's plans. The Turkish side said that despite the fact that Russia had all the intelligence information, Turkey will not give up its intentions. In fact, this is a conflict already."

"What does Turkey want in Syria?"

"Storming a large city is always extremely difficult. Terrorists from Jabhat en-Nusra and ISIL still hold a half of the city. If they are deprived of supplies, if their channels are cut, then the group in Aleppo is doomed to destruction. Turkey does not like such a prospect, so they intend to change the situation - they need to push the Syrian troops away from the border."

"How can Turkey invade Syria? How big this invasion can be?"

"This is a hypothetical question, because we do not have all the information we need. However, it appears that Turkey wants to take control of a major channel, a road that was used to supply the terrorist group in Aleppo with weapons and ammo. This will be a ground operation, definitely. Turkey may also want to create a corridor for the Aleppo group to escape to Turkey - they may want to do it to keep the groups of militants that Turkey was maintaining and training for long."

"We can see Saudi Arabia and its allies talking about the possibility of a ground operation as well. Why does Saudi Arabia want to go to Syria?"

"For the same basic reasons. Yemen is an eternal problem for the Saudis, but now they have another one in Syria. Saudi Arabia says that it would send a limited contingent of 2,000 to Syria - this is a very small amount for such military operations. They say that their forces will join the group of the United States to attack Al-Raqqa - the current capital of the Islamic State. Ar Raqqah is very rich in oil.

"Before the civil war, the city was the oil capital of Syria. It is no accident that Islamists of the Islamic State occupied the province almost entirely and made it their main residence. To go on the offensive in Al-Raqqa, the Americans took major efforts, and President Obama received Congress permission to use aviation to support the offensive on this direction. If Americans take the ISIL capital, they will be able to declare victory in the war on terrorism."

"Do you think that Turkey will commit another provocation in the near future? Is large-scale aggression against Syria possible? Will NATO support Turkey in this?"

"If they start the operation, this is not going to be a large-scale invasion. They need to take a small part of the Turkish-Syrian border under control. If Turkey launches large-scale aggression, it will be hard for NATO to support it even verbally. A series of small provocations will leave more space for maneuvers, and NATO will be able to interfere. Turkey is not planning to conduct the operation alone."

"Whom will the West support?"

"In any conflict, the West supports the one who is winning. If Turkey achieves success in something, the West will support Turkey. If Russia succeeds, John Kerry may fly to Moscow as "the dove of peace." The conflict in Syria began as a color revolution during the Arab Spring, before it evolved into an armed uprising, a civil war and then a hybrid war. By and large, Russia and the West are waging a real hybrid war in the Syrian theater of actions. In a hybrid war, great powers never face each other head-on. They take efforts to make their allies clash instead."