Evo and a referendum for the future of the Great Bolivia

Bolivia prepares to hold the referendum for the re-election of President Evo Morales. The process that will unfold on February 21 next includes the partial reform of the constitution which seeks to extend by one more term the government of the current president, which ends in 2020. 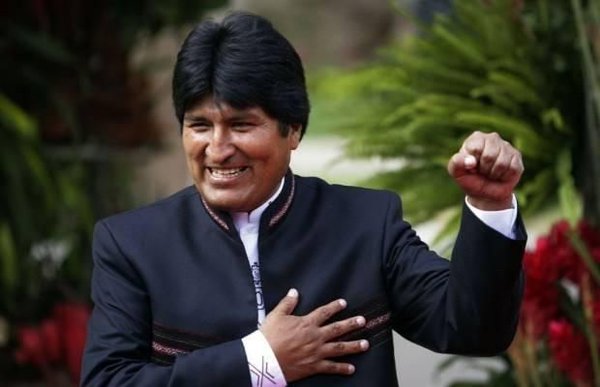 This initiative is supported by social movements with their nucleus at the National Coordinator for Change [CONALCAM, its acronym in Spanish], which support the government of Evo Morales since its inception in 2007. A referendum, however, does not propose an indefinite re-election, as expressed by MAS leaders. The search for the "yes" to the government of Evo Morales carries a meaning that goes beyond a continuation with the political process launched in 2006, whose height and consolidation is achieved with the sanction of the new Constitution in 2009 that reshapes the country in all aspects, giving birth to the Plurinational State of Bolivia. This goes "beyond" the threshold whose dimension embodies their key role in the construction of the Great Patriotic Bolivia and continuity of the Bolivarian process inaugurated by Commander Hugo Chavez.

This protagonism begins to reach its target by several factors. One is the absence of Chavez after his death in 2013 and the subsequent political crisis that the defeat in the legislative elections of December 6 2015 originated. And the other, which puts Evo Morales in a magnificent situation on the regional scene, in Bolivia's stability economically [with sustainable growth of over 5% per year] despite policy  attempts by the opposition in recent years, which become stronger to withstand the deterioration that popular governments suffer.

This milestone puts Evo Morales as the leader of the Bolivarian process, since in the leadership setting the non-presentation of Rafael Correa in the coming 2017 elections in Ecuador make the Bolivian President the one who occupies this place of relevance in our region in the medium and long term.

Bolivia, against the critical condition that affects Venezuela and the arrival of a clearly neoliberal government in Argentina, has a responsibility to put on its shoulders the Bolivarian process.

The task is not simple and will require strength and regional leadership that Evo Morales has to spare, thanks to his experience as a cocalero worker and union leader.

The government of Evo Morales is antagonized with the most concentrated sectors of power in Bolivia, facing various breakaway attempts on the part of the richest regions of the Andean country and coup conspiracies that put him in check. This is where Evo Morales felt the support of UNASUR and CELAC, in situations where secessionists challenged to break the unity of the country.

Bolivia, before the arrival of Evo Morales and Álvaro García Linera, was one of the countries with the highest inequality in the entire southern cone, and this situation was reversed significantly in a decade, breaking the subordinate devices which marginalized for centuries the indigenous communities. They make up more than 60% of its population. The enactment of a new constitution allowed Bolivia to crystallize these inclusion policies whose main axes are the redistribution of wealth that has reduced extreme poverty significantly, the right to ownership of land and the nationalization of energy resources, making - as the president said in IV Summit CELAC - basic services a human right. There is a project that falls within the five-year development plan [2016-2020], which seeks to deepen and expand the state policy carried out in the last decade.

The region was sinking after the death of Chavez and this particular absence must be supplied by an agent who knew how to resist neoliberalism clashes nothing less than deepening the emancipatory project in his own territory, and that, without doubt, is Evo Morales.

The recent electoral defeats in Argentina and Venezuela drastically changed the regional and international political chessboard. The direction of our recent history is turning abruptly to a new conservative restoration back to target in the Atlantic as in previous centuries, trying to dust off the old neo-colonial agreements and update them with free trade agreements.

What is clear on this path of recovery is the beacon that should guide the Bolivarian process not to continue losing ground in the fight against local oligarchies and imperialism is called Evo Morales.

South America, as a precursor to the process initiated in 1999 by Commander Chavez, should continue the work of freeing the region.

For this reason, it is important that Bolivia democratically enshrines the possibility that President Evo Morales is to be re-elected and continues holding the reins of a political project that restored the dignity of the Bolivian people and Latin American peoples.

Bolivia is a pride for us, as Venezuela and Ecuador in the last times, who knew how to claim the principle of sovereignty of our nations facing the permanent interference of US imperialism.

Latin America has to support anyway this emancipatory process. And despite the missteps of this last time, still we keep the hope this time, in which we accumulated an experience of almost two decades and it is a starting point.

The dichotomy in these latitudes remains the same: Patria Grande (Great Fatherland) and colonial pact, whatever their nomenclature.

As in the 2009 referendum in Venezuela, where the first who congratulated Chavez was Fidel Castro, hopefully this so transcendent occasion  will happen again with a call from the historical leader of the Cuban Revolution. This would illuminate the path of the continental process.

As Chavez said on the night of his triumph in the "yes" vote that allowed him to be re-elected: "It was a great victory! Here is the people of Simon Bolivar raising the banners of dignity!" Hopefully these are also the words of Evo and the Bolivian people.