Ukrainian President Petro Poroshenko has recently stated: "We are resolute in our determination to introduce deep and comprehensive free trade zone with the EU from January 1, 2016." Well-known opposition politician and presidential candidate Vladimir Oleinik shared his views about the future of Ukraine in a brief interview with Pravda.Ru. 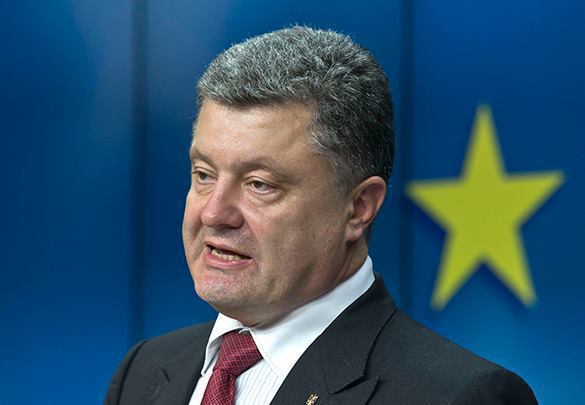 What did Poroshenko mean?

"During this year, Ukraine has become stronger," Poroshenko said at a press conference after the talks with Lithuanian President Dalia Grybauskaite. As Ukrainian opposition politician Vladimir Oleynik noted in an interview with Pravda.Ru, Ukraine used to be in a normal financial situation in terms of the hryvnia rate against the US dollar, the GDP rate and so on.

"As soon as there was a coup, all indicators went down, - said Vladimir Oleinik. - Ukraine has lost the Donbass and the Crimea that account for 20-25 percent of the Ukrainian economy. A lot of funds are allocated for the war that exhausts the economy."

War is always poverty, victims and higher budget allocations for the solution of problems associated with the destruction of infrastructure.

"If Poroshenko refers to all these "achievements," then they are great achievements indeed. All the rest is in a negative trend. In Ukraine, there was only one reform conducted in 24 years - the reform of the monetary unit. "We now have the hryvnia that we can not keep within its original limits, and the national currency is in danger as well," the expert said.

Everything else that has happened in Ukraine can not be referred to as reforms. "Even what the Ukrainian authorities are presenting now as the reform of the police is just for show," Vladimir Oleinik told Pravda.Ru. "They put new uniforms on people whom they hired from the streets, and the chief of the Ukrainian police, a national of Georgia, said that one did not even need to have either higher education or legal knowledge to become a police officer in Ukraine. All they want is to make them look like American cops - both outwardly and in terms of aggressive behavior against citizens," the expert said.

The Ukrainian government is bankrupt

All the recent achievements n Ukraine are negative, Vladimir Oleynik believes. "We were already on the verge of default. Nowadays, Ukraine does not want to repay three billion dollars of debt to Russia, so Ukraine still remains on the brink of default. "There are no achievements. The Ukrainian authorities are bankrupt. If these guys can not run the state, then they should go and give way to someone else. There is only one way to solve this crisis - to hold early parliamentary and presidential elections."

Poroshenko is confident that Ukraine should not depend on energy from Russia. As Vladimir Oleinik noted, when Ukraine buys gas by reverse from Europe, Ukraine has to pay more for this gas. In addition, one has to be crazy to buy low-quality coal from Africa.

"They say today that Ukraine has lost energy dependence on Russia? This is just a bluff," said Vladimir Oleinik.

The Ukrainian government is waging war against its own people

Vladimir Oleinik does not deny he fact that the military action in the country has improved the state of affairs in the military field, although the funding of the army was increased to the detriment of the social field. However, it is peace and the social field that the Ukrainian government needs to think of in the first place. In today's Ukraine, the authorities are waging a war against their own people.

Contrary to Poroshenko's statements, Vladimir Oleynik does not think that there is a strong pro-Ukrainian coalition in the world today. "Originally, everyone thought of these revolutions as something positive. But then they saw that they put a gang in power, and the gang continues stealing."

"The West is supporting a terrorist organization, because the sitting Ukrainian government is, in fact, a terrorist organization. They came to power by force, they blow up power lines depriving the Crimea of electricity. There is no government in the country. There are some criminal groups that make decisions - they can assault a general of the Security Service of Ukraine and kick him. Today's policy in Ukraine is the policy of terror against people and dissidents."

There is no pro-Ukrainian coalition in the world, Vladimir Oleinik believes. Europe is doing its best to turn a blind eye on the topic of war in Ukraine. "A year ago, Poroshenko was the center of global attention. He would arrive at this or that summit, and everyone would shake hands and take pictures with him. Not that long ago, he came to Paris, and Obama just passed him by and did not even look in his direction. Do you think it was incidental? For Europe and America, Poroshenko is a "son of a bitch, but he is our son of a bitch,"" Vladimir Oleynik told Pravda.Ru