What can Putin and Sarkozy do together?

Nicolas Sarkozy, the leader of the French Republican Party, paid a private visit to Moscow. The French press reacted negatively to Sarkozy's visit to Russia. According to French newspapers, Sarkozy, having been charmed by Putin, is running anti-French policy to take revenge on President Hollande. This could be true to fact, but why does Putin need to meet Sarkozy in Moscow? 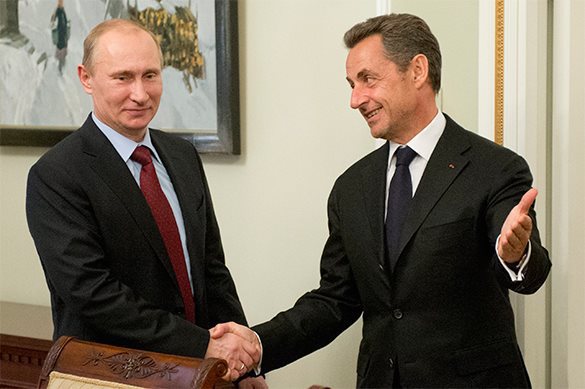 Vladimir Putin is "the new master of the game in Syria, who does not hesitate to challenge the West in a dangerous confrontation." Putin receives the support from former president Nicolas Sarkozy. According to the author of the above-mentioned article, "negotiations with the dictator weaken the French diplomacy in an attempt to gain influence in his camp, while expressing the power and state wisdom that he has lost." The result will be the opposite, says Thierry, and Sarkozy will not win primary elections at the Republican party in November 2016.

The author names five signs of Nicolas Sarkozy's weakness. Firstly, Sarkozy is not a Gaullist, because his behavior comes contrary the official policy of the country and thus weakens France. This is inadmissible under the religion of de Gaulle," the article states.

Secondly, Sarkozy still thinks he is the president of France, although his candidacy did not receive electors' support in 2012. Sarkozy behaves "like a child" as if he is still in the office: he builds the "shadow cabinet" and travels abroad for the sole purpose of "shaking up" his supporters.

Thirdly, Sarkozy "went to swear allegiance to dictator Vladimir Putin." According to the French writer, one can forgive that to Depardieu - "a great actor" who feels unloved in France. Yet, one can never forgive this to a statesman, who wants to become the President of France again.

Finally, "the trip to Russia is not free of charge. "Sarkozy asked for an interview with BFM TV directly from Russia, as if it was urgent. He did not deceive anyone when he said that his lecture to students of MGIMO University (Moscow's State University of Foreign Relations) would be free. Yet, his trip to Moscow is obviously not free, and Nicolas Sarkozy is counting on media coverage to impress most naive viewers in France, who will vote for him in 2017."

Sarkozy's party fellow Thierry Mariani, who has been to the Crimea as part of an informal parliamentary delegation, believes that Sarkozy's most recent trip to Russia was reasonable. "This is not parallel diplomacy. France has been pursuing the policy of sanctions against Russia for two years already. Bravo! Never before Putin's rating has been so high. We are coming to the conclusion that the policy of sanctions has come to a standstill, - Thierry Mariani told France Info. - Sarkozy went to Moscow with a specific message that Europe must maintain a dialogue with Russia, that France plays a special role in Europe."

France needs to talk to Russia, rather than isolate her

"Sarkozy's visit can not make opposition to French diplomacy, - Pavel Timofeyev, a researcher at the Department for European Policy Studies at the Institute of World Economy told Pravda.Ru. - First of all, Sarkozy is in no way connected with the authorities of the French Republic - he only represents his own party. Secondly, given the very productive experience of relations with Russian President Putin, they have preserved a constructive relationship. I think that the visit is about building a bridge or creating a background for further cooperation."

Sarkozy is not the person who can be bought. "He has learned a lesson or two from financial scandals. While planning the second presidential campaign, he is unlikely to give food for talk," the expert said.

During his lecture to the students of MGIMO, Sarkozy said: "Isolating Russia makes no sense. One needs to talk to Russia,"said the politician. He stressed out that dialogue was absolutely necessary in the relations between Russia and France, as well as between Russia and Europe.

No one is satisfied with the current state of affairs in Syria, Sarkozy continued. According to him, one needs the coalition of the West with Russia. He also suggested refusing from the dialogue with the "Syrian opposition."

The attacks on Sarkozy in the French media indicate that certain forces want to discredit him as a presidential candidate. The hysteria shows that he is likely to win the primary elections in November. Who will be the next president of France? Hollande's chances are slim. Will it be Marine Le Pen? This is quite possible, but her policy will be even more pro-Russian.

Why does Putin need to meet Nicolas Sarkozy? On the diplomatic level, Russia works only with official authorities, but now it appears that Russia should switch to working with opposition. This is what the Americans do to strengthen their positions in the world.