Former British Prime Minister Tony Blair did not apologize to the Iraqi people. Blair apologized for  incompetence of his intelligence and for the lack of strategic thinking in 2003. Tony Blair is trying to  soften the blow after it was revealed that the UK authorities were staying in absolute subordination to the interests of the United States in the war in Iraq. 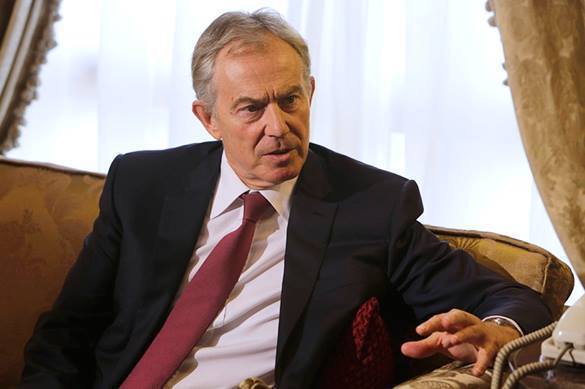 "I can say that I apologize for the fact that the intelligence we received was-was wrong. I could also apologize, by the way, for some of the mistakes in planning and certainly our mistaken in our understanding of what would happen once you removed the regime. But I find it hard to apologize for removing Saddam," Tony Blair told CNN. "I think, even from today in 2015, it is better that he's not there than that he is there," he added.

Tony Blair apologized to himself

There are many questions to Mr Blair. From what position is it better? Why is it better if all is utterly and hopelessly bad in Iraq?

"Tony Blair is a hypocrite. He lied before he initiated the war in Yugoslavia too, - Oleg Yurin, a political scientist at Oxford University told Pravda.Ru. - He claimed back then that he personally knew how the evil Serbs killed 100,000 Kosovar-Albanians. He said he knew where they were buried. He initiated the war in Yugoslavia! Why doesn't he start with an apology for that?"

For whom did Blair apologize while being in the United States? Was it an apology for himself? To apologize for the deaths of 2 million Iraqis, Tony Blair should follow the example of German Chancellor Angela Merkel, who apologizes for the Holocaust on behalf of the German people. It was the British people who elected such a prime minister - a "poodle" of Washington. It was the Labour Party that promoted him to the post of the prime minister, on which he made a career in politics on behalf of people, while amassing a criminal fortune. Why don't you, Mr. Blair, say it directly: "We, the British people, and I, as Prime Minister from the Labor Party, apologize to the Iraqi people."

Blair admits certain responsibility of those who participated in the removal of Saddam Hussein from power and for the emergence of the Islamic State. He added, though, that there were two factors for the Islamic State to become stronger: the Arab Spring, and the fact that the Islamic State came from Syria, rather than from Iraq. In other words, the freedom-loving Arabs and Bashar Assad are more guilty. We were trying to maintain  democracy in the Middle East, but we were wrong, says Blair.

The tale of spreading democracy was widely used for dividing spheres of influence after the 9/11 terrorist acts in the USA. Highly lucrative oil contracts in Iraq were given away to US and US-British companies. The story in Syria and Libya was similar. The Islamic State was created to use "good rebels" for "dirty deeds."

Tony Blair, the poodle of Washington

The military intervention in Iraq had been planned a year before the invasion. The British press learned about it the day before Blair's interview to CNN from Colin Powell's declassified memo to the US State Department. "Blair will be with us... The UK will follow our lead," Powell's memo said.

This is the way it works. One does not need any sovereignty or any intelligence information for an invasion. The reason for it is simple: because the Americans said so.

"Even in terms of remorse, I would not exaggerate: they (Blair and Bush) deserve a lot more than the remorse that they demonstrate, - said Oleg Yurin. - Blair paid the price of his career for the invasion of Iraq, but not more than that. This is all that he is dealing with. Of course, he must face a court sentence for what he has done."

A sentence like that was brought down only once in Malaysia in 2011. A War Crimes Tribunal of Kuala Lumpur found Bush and Blair guilty of crimes against humanity during the war in Iraq.

The verdict stated that the United States fabricated documents to claim that Iraq had weapons of mass destruction. Unfortunately, the Malaysian tribunal is not a member of the international legal system. Western courts will never judge Anglo-Saxons and their allies. In the West, all victims of violent "democratization" are seen as a "contributing factor."

Saddam Hussein and Muammar Gaddafi were murdered. Democracy has not appeared either in Iraq or in Libya. If Assad goes, terrorism and chaos will come to Syria, where, under the scenario or Libya and Iraq, state structures collapsed as a result of Western intervention.