US and world are ruled not by parties, but clans

The US presidential elections are funded by a small group of people. They are an invisible force, which controls not only the American, but also global policy. These people make up two clans, that have their proteges both among the Republicans and among the Democrats. That is why Hillary Clinton does not like Obama, and Trump hates everyone. 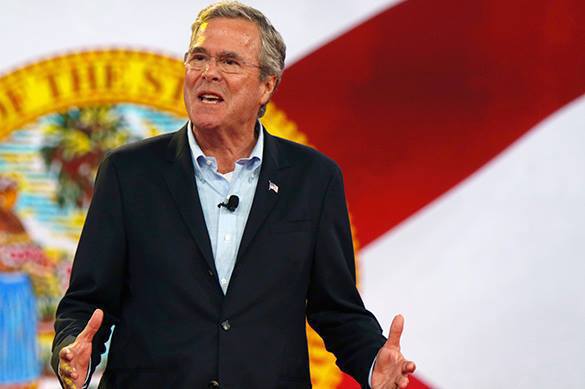 In 2012 a group of billionaires spent about 6 billion dollars for the election campaign, Larry Lessig, Juris Doctor in law at Harvard University says. The expert predicts that the next elections will draw about 10 billion dollars. As New York Times reported, about 400 of the richest US families have gathered so far more than a half funds for the presidential candidates. Hillary Clinton, for example, has about 2,5 billion dollars.

However, the Republican Donald Trump shocks the society confessing that he "bought" the Hillary presence at his wedding and funded his party proteges.

And Hillary Clinton, as it turned out, was spied by the NSA with all possible electronic means. And that is under the democrat President! It also comes out that the Clinton family does not like Barack Obama at all, because he allegedly lowered the boom on her at the previous elections.

It has been recently reported in the media, that Obama ordered to arrest Hillary Clinton, in case Trump is killed. Why not consider such a possibility? There though have been registered more than 90 suspicious deaths in the US for the last 30 years. Let us take the Kennedy clan faith, for example. According to one of the versions, John Kennedy was killed, because he wanted to deprive the Federal Reserve System of dollar control.

But here's the real issue. Isn't anyone surprised with such political scuffle among the candidates of one party? If you attentively read the American sources, it becomes clear that the battle between the Republicans and the Democrats is a mask to make a foul of "a regular American guy". There is no democratic rotation of power, the elections are actually a fight between two powerful clans.

On one side, that is a clan of the Bush (Republicans), the Clintons (Democrats), the Rockefellers - so to say, a group of "new world order". On the other side, a clan of Obama-Rothschild, a so-called "Windsor group", which wishes to limit the US power on behalf of the British Queen.

After all, Great Britain still considers the Americans to be arrogant upstarts, who deprived it of world hegemony after WWII. Even if you look at the Barack Obama's policy, everyone is astonished at the inconsistency of his actions, that lead to the US discredit both in the country itself and abroad.

The presidential elections 2016 will become a theater of war between two clans. What about the Rockefellers' clan candidate, it is clear that it will be Hillary Clinton. But they also push forward Jeb Bush from the Republicans.

A candidate from the Rothschilds is still not defined. Bernie Sanders may be from the Democrats, and the Republicans may have a representative of the billionaires Charles and David Koch, who are the "talking heads" of this clan. Being 79 and 75 years old respectively, they own the Koch Industries, second biggest private business in the US with allegedly 135 billion dollars capital and 100 billion dollars profit. They ranked sixth in the recent Forbes list of the richest people in the world.

The brothers are reported to be ready to donate 1,2 billion dollars for their protege. But that is neither Trump, nor Bush.

If their candidate wins, there will be evident intensification of the patriotic rhetoric and actions directed at the support of the US hegemony in the world. This clan is pragmatic, the motto "It's not personal, it's just business" helps to establish relations even with the opponents.

From this point of view, Donald Trump is doomed to defeat. Neither Rothschilds, nor Rockefellers seem to put a stake on him.

In the US there often occurs a discussion before the elections on the alteration of the election system, which is corrupted with the money of influential clans. The Democratic Party candidate Larry Lessig, for example, insists on the universal suffrage and alteration of the funding system. He offers to hand out vouchers of 100 dollars for example to all voters, so that every one decides which candidate he wants to fund.

Thus, every candidate could assemble up to 2 billion dollars. That is two times more, than there was spent on Barack Obama and Mitt Romney in 2012.

However, it is evident that this plan won't be realized. 96 % of the Americans believe that influence of money should be reduced in politics, according to a survey conducted in 2013. 91 % does not think it is possible though.

"They will never vote for alteration of the electoral system via Congress, or to reform funding via Wall Street. There are a lot of key issues, which can't be solved, unless we deal with this key problem of inequality," Lessig told El Pais in an interview.

So, let us share this pessimism regarding the most undemocratic country in the world, which though loves to lecture other democracies.

Regardless who wins, the privileges will be gained by influential corporations, which due to adopted by them laws and carried out policy, will make themselves even more rich.