Yet another massive assault on Palestine is underway, where, of course, according to the Balfour Declaration, the Jewish population are guests not occupiers since: " ...the establishment in Palestine of a national home for the Jewish people, and will use their best endeavours to facilitate the achievement of (this) it being clearly understood that nothing shall be done which may prejudice the civil and religious rights of existing non-Jewish communities in Palestine ..." (1.) 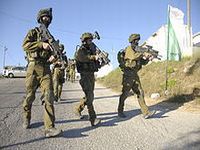 Overnight (8th/9th July) however, one hundred and sixty targets were initially hit, including the European Gaza Hospital (a war crime without a war.) Twenty eight people were killed and over two hundred injured (2) added to the unending onslaught on Palestine from the day the Zionist cuckoo took over the Palestinian nest, homes, gardens, history, culture, ancient sites, cemeteries, villages, valleys, olive and apricot groves on 14th May 1948 (3) ignoring, jack booting and bulldozing entirely the "civil and religious rights" of the population, accompanied by subsequent decades of mass murder and demolitions.

The current onslaught is apparently in response to the deaths of three youths from settler families, for whom no one has claimed responsibility and many questions remain (4.) However homes of two Palestinian "suspects" were arbitrarily destroyed by the Israeli military with no arrests, trial, recourse to law for the dispossessed victims of any kind.

Subsequently in an apparent revenge killing, Palestinian teenager Muhammad Abu Khudair (16) was kidnapped and murdered, his body doused in gasoline, which was also reportedly poured down his throat before setting him alight (5.) Muhammad's cousin Tariq Khudair (15) visiting from Florida was apprehended and beaten so badly by the Israeli police that he seemingly: "woke up in hospital." (6)

The all led to rockets being fired in to Israel, though no injuries have been reported. Israel responded by targeting Gaza (Palestine of course, has no meaningful defence forces) with: "four hundred tonnes of bombs and missiles" with "four hundred and forty targets being hit" and with: "The battle against Hamas (to) intensify over the coming days; it will exact a huge price." (7) The tiny Gaza Strip is just forty one kilometres long and between six and twelve miles wide and home to 1,816,379 people (2014 figure.) Nearly 45% of the population is under fourteen years (2010.)

Israel is clearly planning another "turkey shoot" reminiscent of General Norman Schwartzkopf's infamous boast of his aerial slaughter on the Basra Road, of those seeking safety, with no where to hide, in the first Gulf war.

With the UN in the form of Ban Ki-moon flaccidly urging "restraint" and world leaders mute, as ever, on Israel's murdering misdemeanors and homicidal excesses, it must be noted that 2000-2014, Palestinian child fatalities "as a result of military and settler violence" to date are 1,407. The eight reported killed today are not included in that Defence for Children International's figures (8.)

Article 33 of the Fourth Geneva Conventions is unequivocal: collective punishment is a war crime. "No person may be punished for an offence he or she has not personally committed. Collective penalties and likewise all measures of intimidation ... are prohibited ... Reprisals against persons and their property are prohibited."

It is a supreme irony that when unspeakable crimes were committed against the Jewish people, their rights, their property, the Nuremberg trials were meticulous in their findings, retribution and laying down of laws to attempt to guarantee "never again", against any race, group or society. In sixty five years of unspeakable crimes by Israelis against their fellow Semites, the Palestinians, international law has remained deaf mute.

Since US aid to Israel is $3 Billion annually, they too are partner in yet another Middle East crime against humanity.

As all victims of tragedy the dead are not numbers, but names. The incomplete list of the latest victims of "the only democracy in the Middle East" so far recorded by the Palestinian Ministry of Health are:

Victims of residential areas not yet recorded are:

There are seven others and eight more children to be added. By the morning there will surely be others, names, not  "collateral damage" or "casualties", living beings who were planning the day ahead, erased.

Will the insanity ever end? Maybe there is a glimmer of hope. The coming week end there are demonstrations in cities around the world in numbers not seen since the proposed assault on Iraq in 2003, in outrage at the attack on Palestine and the Palestinian people. To read the extraordinarily comprehensive list of participating cities (9) arranged in so brief a time should, in itself, be a wake up call for governments.

The US and UK are closest of Israeli allies and leaders of world wide destruction, both have elections next year perhaps this might be the start of a mega warning message to both countries and to Israel: Enough.