Greece loses biker Varoufakis. Who's next?

What has been happening in Greece lately is a cautionary tale of how a party representing the powerless and impoverished majority is trying to win the war from having the powerful and wealthy minority. Chances for that are slim as evidenced by the resignation of Finance Minister Yanis Varoufakis. However, politicians like Varoufakis appear in other countries of Europe. Where is Russia's place in this war? 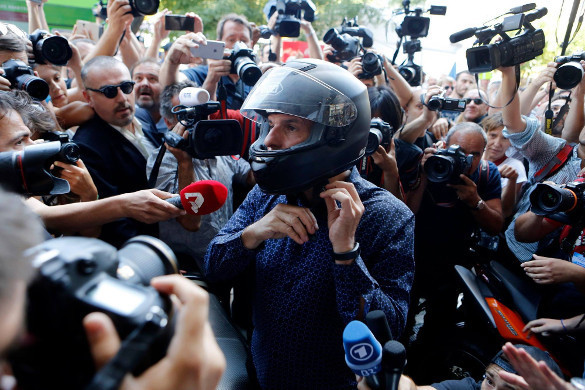 In politics, there are no random people. For example, Barack Obama had taken "training courses" on how to behave with homegrown establishment before becoming the Democratic candidate. Vladimir Putin is not a random person in politics either: he was brought to power by concerned elites.

In China, the rotation of leadership takes place every ten years, with no surprises stipulated. It would seem that the modern world "gives birth" to policy-makers only by means of artificial conception. Lately, however, the world has seen people who represent people, rather than oligarchs. In Russia, they are the Crimeans, who organized the reunion with the motherland; in Greece they are SYRIZA leaders - Prime Minister Alexis Tsipras and Finance Minister Yanis Varoufakis, who, by the way, repeated the Crimean precedent of the referendum.

European elites despise Yanis Varoufakis. He received excellent education in economics at Oxford, is devoted to the country, incorruptible, resourceful, and likes calling a spade a spade. The minister goes to work on a bike, does not wear official clothes for official meetings, and is an arrogant person, because he dares to lecture European officials on how to save Europe.

"Before pointing a finger at us and accusing us of being irresponsible, they (European officials) should criticize themselves first and stop pretending that their austerity measures are working," Yanis Varoufakis said in an interview with Spanish publication El Mundo.

"Let's take General Motors, for example. The company was declared bankrupt in 2009, its debt was restructured, which gave the company an opportunity to make profit and pay debts. This is what we want," said Varoufakis.

What can be easier? Yet, European officials (the Eurogroup) stick to their own principle of stealing money the "honest way." This is a way of returning trillions of dollars from post-crisis years to the Federal Reserve System to "rescue" the neo-liberal economy.

The Eurogroup is an unconstitutional EU governing body that consists of German Finance Minister Wolfgang Schaeuble, the nominal head - Dutchman Jeroen Dijsselbloem - and chief treasurer, ECB director, Mario Draghi. These people spend a lot of money on advisors from major US banks such as Goldman Sachs, whose goal is never to change the "austerity" system.

"The EU citizens do not have the right to know anything, even after 30 years, about what happens at the meetings of the Eurogroup. It turns out that these meetings are held to make decisions that determine the life of so many Europeans. Do we want Europe to work like this?" Varufakis asked.

"Last month, they put us in front of an absolutely brutal dilemma: either sign (a new austerity plan), or close banks. We did not sign. We refused to initial the agreement that we could not implement," he added.

What the EU has done to Greece on the eve of the referendum is "terrorism", as  Varoufakis put it.

"Why did they force us to close banks? To instill fear in people. When they want to instill fear - this is called terrorism," Yanis Varoufakis told El Mundo.

Noteworthy, Greece has saved 91 billion euros on its citizens and wired this amount to creditors under the "austerity plan" of the Troika - the International Monetary Fund (IMF), the European Central Bank (ECB) and the European Union.

Yet, the country has not been saved. Greece's debt was still growing. Today, every Greek national owes 30,000 euros. The unemployment level in the country makes up 25 percent. To crown it all, more than a million households remain disconnected from electricity because they are unable to pay their bills.

According to SYRIZA leaders, the EU should take responsibility for the collapse of the Greek economy. Varoufakis calls on the EU to carry out real reforms. According to him, the "suicidal economy" could be replaced by an analogue of the Marshall Plan and economic regeneration in the euro area.

Yanis Varoufakis said that he would leave politics as soon as he was forced to lie.  Yanis Varoufakis resigned as soon as Greece said "no" to austerity measures.  Now it is Tsipras's turn - he will be personally in charge of debt restructuring negotiations.

All Western analysts agree that Greece will have to experience the terribly painful exit from the euro zone to discourage others, such as Podemos of Spain.

Noteworthy, the Russian president was the first foreign leader with whom Tsipras spoke after the announcement of the referendum results.

Greece was the first to have said no. Hungary may be next.

"Hungary is likely to be next. Protest sentiments are strong there. Hungarian Prime Minister Orban is opposed to the European Union, but there are also other forces in the country that feel concerned about the future of their nation. There's also Italy, that rests on the financial volcano, there are also southern European countries, such as Portugal and Spain. One can say for ages that Spain has its industry as security, while the Portuguese are used to living modestly. However, it is the very idea of the European Union that may fall apart now," Yuri Solozobov, an expert at the Institute of National Strategy of Russia told Pravda.Ru.