What can Russia do to rock the boat of the West?

The United States is committing color revolutions in post-Soviet space, trying to strangle Russia with sanctions (for the wish of Russian people to reunite against the backdrop of the fascist regime in Ukraine) and threatening its integrity. Russia faces the task of finding a good, adequate response. 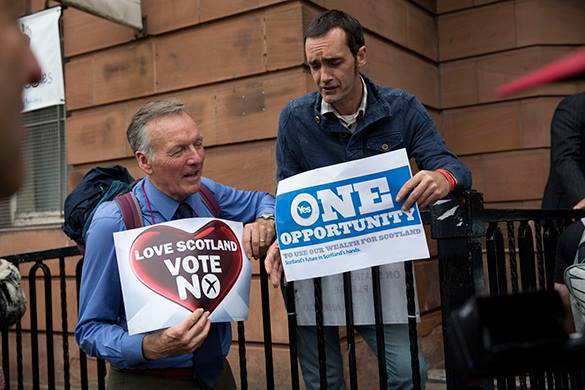 According to Sky News, an advisor to German Chancellor Angela Merkel, Norbert Röttgen, expressed concerns that the Russian authorities may start funding the anti-European lobby in the United Kingdom. "If he (Putin) could affect driving a wedge between Britain and other Western countries, he would definitely do it," said Röttgen.

The statement is arguable. In October 2012, one of the leaders of the United Kingdom Independence Party (UKIP), Nigel Farage, said that Russia and the United Kingdom had one common task - to restrain the German hegemony. Today, one can look for common interests with Scottish nationalists, on how, for example, to use the precedent of the Crimea to substantiate Scotland's pullout from the UK.

Russia may possibly be funding such parties already. French news agencies said that the decision to give a loan to the National Front of Marine Le Pen, who has not been able to find a creditor in France for quite a while, was made in September 2014 by First Czech-Russian Bank, headquartered in Moscow. Does this loan have a political meaning? Le Pen herself called this question offensive. Who knows?

Indeed, there are candidate organizations already. The list includes such parties as Jobbik (Hungary), Ataka (Bulgaria), Five Stars (Italy), Podemos (Spain) - these organizations represent a real political force in their own countries and support Russia's position on the Crimea.

"This is a big and broad problem, because we have lost the experience of working with the opposition since Soviet times," Alexey Fenenko continued. The Soviet Union was sponsoring communist movements around the world and enjoyed adequate support. Today's Russia does not work even with opposition in the form of the Social Democratic Party of Germany, even though the party traditionally shares a favorable attitude towards Russia, the expert said.

Indeed, Putin does not invite SPD leaders to the Kremlin. However, French President Hollande did it in 2012, immediately after taking office, as evidenced by recent WikiLeaks revelations.

In addition to parties, one must support social movements. According to Politico, the Russian government supports the movement for the secession of Texas from the United States. The author of the material in the publication suggests that Russia was showing a lot of attention to the south-west of the USA, where separatist sentiments may appear. In addition, the newspaper wrote, one of the leaders of the Texas Nationalist Movement, Nathan Smith, has recently paid a visit to St. Petersburg, where he took part in the forum of pro-Russian movements.

The author recalled a statement from the head of the parliament of the Chechen Republic, who said in March that Russia should start shipping weapons to Mexico, if the United States was going to provide arms to Ukraine. "We will launch shipments of new weapons to Mexico to resume the dispute on the legal status of the territories annexed by the United States - presently, they are US states of California, New Mexico, Arizona, Nevada, Utah, Colorado and a part of Wyoming,"  the Chechen official said.

This would not be the first precedent of the kind. Thus, the head of the German Foreign Ministry Arthur Zimmerman said prior to World War I that if the United States was going to enter the war, Germany would allocate money to Mexico to win back the lost territories of the states of New Mexico, Texas and Arizona. According to Politico, the threat from the German official had delayed USA's entry into the war.

Russia must join forces with Greece

Well, Russia is attempting. Greece would be a good example. It appears that SYRIZA coalition came to power by the will of God. Greece is also an Orthodox country, the cradle of Slavic literature, a historical friend of Russia.

Russia has to do something right now. We could give a five-billion-dollar loan to Greece for the construction of the Turkish Stream gas pipeline. Two billion has already been allocated. This is a large long-term investment that will raise the image of Greece and give it an opportunity to develop. Support for Greece is a very promising card for Russia indeed.

But there is another view. "Russia does not work like that due to the principle of its state organization, - Yevgeny Fyodorov, deputy of the State Duma, member of the United Russia faction told Pravda.Ru. Russia is a state, for which internal development is first priority. Yet, Germany, France, England, the United States develop at the expense of other nations. In fact, fascism is inherent in the technology of their government: some people living in the United States, for example, can and should live better through the exploitation of other people living somewhere in China, India or somewhere else.

"And of course, Western media are projecting this technology on Russia. However, the Russian technology is completely different. We are the largest country in the world that has become so with the help of defensive policies, while protecting its peoples against aggressors such as England, Germany and others. "

The reader is to left to judge for themselves.