Racism in USA is not dead. Racism lives on and on

A week after Charleston church shooting, the Ku Klux Klan started recruiting new members. The American society was given a signal that the whites were ready for war with the blacks. White Americans hate blacks because they "rape our women and expel us from our country," while blacks Americans hate whites for usurpation of power and double standards. 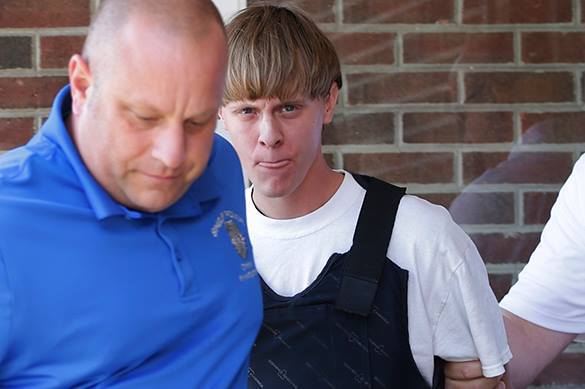 According to US media, municipal authorities throughout the United States have reported the appearance of Ku Klux Klan leaflets calling to join the organization. In many cases, the leaflets come along with candy. The situation is especially alarming in California, Kansas, Alabama, Mississippi and Georgia.

The leaflets containing telephones of local branches of the organization salute the American Breivik - Dylann Roof, who shot a black pastor and parishioners in a Methodist Church in Charleston, South Carolina, on June 17.

Dylann Roof: That has to be me

The 21-year-old American committed not just an act of murder. It was a political murder, because his actions posed a threat to peace of the civil society. One of his victims is Clementa Pinckney, who was a pastor and a South Carolina senator.

In his manifesto, Roof called for a "racial war." "I have no choice. I am not in the position to, alone, go into the ghetto and fight. I chose Charleston because it is most historic city in my state, and at one time had the highest ratio of blacks to Whites in the country. We have no skinheads, no real KKK, no one doing anything but talking on the internet. Well someone has to have the bravery to take it to the real world, and I guess that has to be me," Roof wrote.

Roof was captured in North Carolina. He currently remains in solitary confinement and was accused of nine counts, including murder.

Immediately after the tragedy, US authorities started talking about an anomaly. They called Roof's crime a single act of a psychopath, who was obsessed with hatred for blacks, a relic of the past and so on. However, a week later, Democratic presidential candidate Hillary Clinton said that it was a case of "racial terrorism." Clinton stole the initiative from the Republicans, who cherish the white electorate in southern states.

These election intrigues do not surprise anyone. Marketing intrigues do not raise any eyebrows either: online stores have removed the Confederate flag from their price lists soon after the shooting.

The Confederate Flag is definitely a symbol of segregation and slavery, but any actions with this flag will incite racial strife that exists in the American society. This hatred takes real forms in Ferguson, Baltimore, and is caused with economic and social inequalities that lead to disappointment and rising crime. Blacks commit crimes against whites. If they rob a store, then it will be a store of a white man. If they rape a woman, then it will be a white woman, if they protest against power, it will be white power.

As a result, even police officers join the Ku Klux Klan (there are cases in Florida, Missouri, Alabama). One shall conclude that racism in the United States has not died, even though the American establishment tries to prove the opposite. No burning crosses and direct insults in public transport does not mean that there is peace. Racism is not congenital, as President Obama says. There is no racism in a person's DNA. Racism is acquired. Such people as Roof are not an anomalous phenomenon - they appear signaling danger to society.

The real threat to America is homegrown, rather than Islamic terrorism. At least 48 people have been killed in the US by right-wing extremists (racists) in the past 14 years, starting from September 11. This is almost twice as much as compared to the number of those killed by so-called jihadists during the same period of time, a study by New America Foundation think tank said.

White violence is not terrorism

However, in the United States, people do not tend to approach the phenomenon of "white violence" as terrorism. Most Americans tend to think that the definition of "terrorism" is only applicable to international terrorism. Well, definition does mean a lot in America, even when it comes to who is going to investigate - either federal or local authorities.

"A very difficult situation has formed in America after these attacks. Everyone started running around this flag, - Vladimir Vasilyev, chief researcher at the Institute of the USA and Canada Studies, Doctor of Economics said in an interview with Pravda.Ru. - It was a political assassination, because there was a black pastor killed, who was also a senator from the State of South Carolina. Today, America has returned to the times of the late 60s and early 70s of the last century, when they used to kill politicians in the course of political campaigns.

It was then, when presidential candidate, Senator Robert Kennedy, was killed in 1968, and in May 1972, an attempt was made on another candidate - George Wallace, a former governor of Alabama.

"This tragedy (in Charleston) marks the return to traditions of the Wild West, when undesirable candidates are likely to be removed. This also applies to Hillary Clinton and Republican candidate Jeb Bush," Vladimir Vasilyev told Pravda.Ru.

"The meaning of the signal is very simple - we will shoot you. Do not forget that this is the south of America - this is a subtle hint to what happened 150 years ago, when Lincoln was killed. It is also symbolic that the terrorist attack was committed in one of the oldest churches in the south of the United States. In today's United States, violence enters political life," said Vladimir Vasilyev.

In conclusion, we would like to remind our readers of the first federal anti-terrorism law of America, aka the Civil Rights Act of 1871, Force Act of 1871, Ku Klux Klan Act, Third Enforcement Act. Back in 1871, martial law was imposed in nine counties of South Carolina, thousands were arrested. However, in 1882, the Supreme Court ruled that the law was unconstitutional. Nowadays, there are four white racist organizations and two branches of the Ku Klux Klan that operate officially.

Indiana: The state based on hate