The police brutally dispersed an unauthorized rally in Yerevan, the capital of Armenia. The current protests in the former Soviet republic of Armenia are led by "No to Robbery" civil initiative. Western and Ukrainian media write that Armenia is another country to experience the "revolution of dignity." The fifth column is working from inside the government of Armenia. 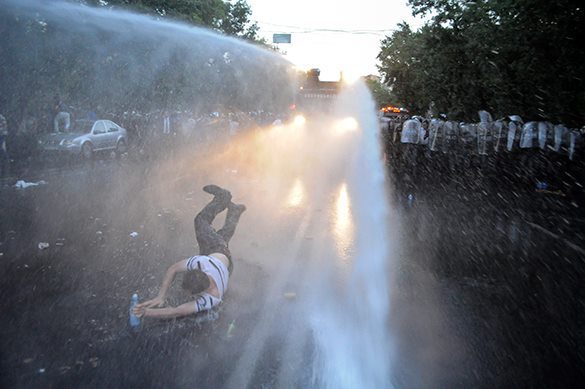 Formally, the protests in Armenia started after the authorities raised tariffs on electricity at the request of the company Electric Networks of Armenia (a subsidiary of Russia's OAO Inter RAO UES). Last week, the State Commission for Regulation of Public Services of Armenia raised the price per kilowatt of electricity in Armenia by 6.93 drams (about 5.7 rubles, vs. the previous 4.8 rubles, or 42 drams). The new tariffs will take effect from 1 August.

The information war against JSC Electric Networks of Armenia is based on the assertion that the company has accumulated a debt worth $250 million due to inefficient and even criminal management. It was said that the company wanted to lay the burden of the debt on the shoulders of Armenian taxpayers. These accusations come from both the government and the opposition. The latter saw a conspiracy between the government and JSC ENA. "Embezzlement and violations at JSC Electric Networks of Armenia took place at the direction of or with the approval of Armenian authorities," the Armenian National Congress (ANC) said in a statement, Arminfo.info reports.

Representatives of the Armenian National Congress stressed out that the lion's share of the debt of the company expanded the shadow budget of the country that was several times the size of the state budget of Armenia. To crown it all, it is Armenian President Serzh Sargsyan who controls the shadow budget, ANC claims.

Also read: Russia and Armenia draft their roadmap before 2020

The statement also says that all of Armenia's existing problems can be solved by overthrowing the government. "The regime will become weak and impotent, if the society consolidates and starts fighting against it," representatives of the Armenian National Congress said.

This looks like a jolly good scenario of revolutions in Ukraine and other post-Soviet states, does it not?

Surprisingly, it was Armenia's Energy Minister Yervand Zakarian, who accused the Russian company of embezzlement. Does it mean that the Armenian government condones theft? Such a government must resign, and it will happen so in Armenia unless President Serzh Sargsyan rethinks his cabinet. Obviously, there is a fifth column working in the Armenian government. The active work was launched soon after cookies lady Victoria Nuland paid a visit to Yerevan. Paul Craig Roberts, formerly an official with the Reagan administration, said in an interview with the Yerevan Geopolitical Club public organization that Nuland had visited Armenia to organize a coup there. According to Roberts, Armenia would be the scene of a coup similar to the one that happened in Ukraine in 2014. The goal of the funding of Armenian NGOs is to take people to the streets and bribe politicians. Armenia would be destroyed to become a vassal state. Afterwards, there will be Kazakhstan, Uzbekistan and Kyrgyzstan. In all of these post-Soviet countries, Washington will build its army bases, Paul Craig Roberts said.

Interestingly, the day after Nuland's visit, the Armenian government finally approved the sale of the cascade of Vorotansky hydro-electric power plants to US-based company ContourGlobal. The deal was evaluated at $180 million. The contract came as a highly important political significance, Naira Hayrumyan wrote for Armenianow.com. Firstly, the deal reduces the influence of Russia that owns Armenia's entire energy sector. Secondly, it creates a good basis for the growth of US influence in Armenia. Experts warned that the deal would lead to higher prices on electricity, and so it happened.

Why does Armenia cooperate with NATO being Russia's close ally?

Armenia and its president chose the Eurasian Economic Council as a prime vector of development. Armenia is a member of the CSTO (Collective Security Treaty Organization), but why does it hold meetings with Georgia and NATO? Why do they hold NATO seminars in Yerevan and train Armenian officers at NATO courses?

"Armenia did not enter the EAEC voluntarily, it was not a sovereign decision of either he Armenian people, or the authorities, it was imposed on Armenia by Russia," senior expert at the Center for Regional Studies, David Shahnazaryan said at Rose Road seminar that the NATO Parliamentary Assembly is holding in Yerevan these days.

The above is not just a statement, but a point of view of so-called supporters of Armenia's sovereignty in the government of the country.

"The scheme of protests is just like it was in Kiev, where American comrades were staging such situations through the hands of local proteges, - Sergei Shakaryan, a political scientist, an independent expert told Pravda.Ru. - But the fact is that the whole country is raging about the raised electricity tariffs. I am confident that these decisions are ungrounded from the point of view of economy. In Armenia, prices on electricity are the lowest on post-Soviet space. This is the electricity generated by nuclear, hydroelectric and heating power plants that operate on natural gas, which Armenia buys from Russia at reduced prices."