Russia and Armenia draft their roadmap until 2020 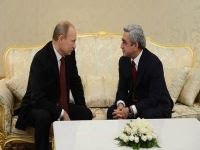 Serzh Azati Sargsyan, born on the 30th of June 1954, has been the President of Armenia since 2008. He studied at the Yerevan State University, where he graduated in Philology in 1979. In between, he served in the Soviet Armed Forces from 1971 to 1972.

In 1979, Serzh Sargsyan became Head of the Communist Party's Youth Committee in his home town, Stepanakert. Later he was promoted to the Regional Committee's Propaganda Division Head and the organization's unit instructor. Serzh Sargsyan also helped to found the Armenian Armed Forces. In 1993, he served as Defense Minister of the independent Republic of Armenia, and in 1996 as Minister of National Security.

In December 2012, Armenia's governing Republican Party nominated Serzh Sargsyan as candidate for another presidential term in the next elections, scheduled for February 2013. He pledged to continue strengthening Armenia's economic stability and the commitment to partnership with the Russian Federation.

Due to Armenia's particular geographic position, security in the Caucasus was another topic discussed between both presidents, Vladimir Putin and Serzh Sargsyan. The Caucasus Mountains, situated between the Black Sea and the Caspian Sea, are the dividing line between Europe and Asia. In this rather volatile region, Armenia has been a dependable and steadfast partner for Russia. Armenians will continue to be loyal allies for the Russians, according to President Serzh Sargsyan.

In Transcaucasia, as the southern part of the Caucasus is often called, Armenia functions as a gatekeeper, watching out for potential troublemakers. The Armenian Border Guard patrols the republic's borders with Azerbaijan and Georgia, while the Russian Army is monitoring its borders with Iran and Turkey.

The Armenian Armed Forces consist of 81.000 soldiers and 32.000 reserve troops. Furthermore, the republic can mobilize every able-bodied man between 15 and 59 years of age, should this become necessary in the case of an attack.

Military cooperation between the Russian Federation and the Republic of Armenia has been increasing steadily during the past years. In autumn 2012, Armenia hosted the CSTO military exercises on its territory in Transcaucasia. The Russian 102nd Military Base with 3.000 troops is located in Gyumri, Armenia. It has been in use since the 1940s, when it was installed as the home base of the 261st Rifle Division of the Soviet Union's Red Army.

The Democratic Republic of Armenia is a small, landlocked, country, with a territory of almost 30.000 square kilometres. The population of 3.300.000 inhabitants is 98 percent Armenian and one percent Russian today. In spite of its small size, the country occupies a strategic position in the Caucasus and plays a pivotal role as the south-western outpost of CIS and CSTO.

In contrast to the other Caucasus republics, Armenia is not dominated by Islam, but is a Christian country. Its official religious institution is the Armenian Apostolic Church, the roots of which reach back as far as the 1st century. The name "Apostolic" refers to the Apostles, Bartholomew and Thaddeus, who preached the Christian faith in this region.

Yerevan, Armenia's capital and largest city, with a population of nearly 1.200.000 citizens, dates back to the 8th century BC. During Soviet times, Yerevan developed into an industrial and scientific centre.

Education has always been a forte of the Armenian people. In the Soviet Republic, the educational system was modelled after the Soviet curricula and applied the excellent Soviet teaching methods. Thus, Armenia became 100 percent free of illiteracy in the 1960s.

Even after the Declaration of Independence, Armenia's primary and secondary education remained free, and completion of secondary school is compulsory for all Armenian citizens. In 2012, Yerevan was named World Book Capital by the UNESCO.

After the dissolution of the Soviet Union, the old ties between Armenia and Russia remained intact. In 1992, diplomatic relations were re-established. In 1997, a Treaty of Friendship was signed by both countries.

President Vladimir Putin alluded to these dates in his talks with President Serzh Sargsyan in August 2012, "We are celebrating two symbolic dates this year, 20 years since our two countries established diplomatic relations, and 15 years since we signed the Treaty of Friendship, Cooperation and Mutual Assistance."

The Armenian President replied, "Our past and present relations are based on the friendly ties between our peoples. This is something that cannot be destroyed. It is our peoples' historic choice and something that we value. This is why we work consistently to deepen our relations."

With his remark that Russia "always gave Armenia a shoulder to lean on during difficulties," Vladimir Putin referred to the global economic crisis, but these words can be interpreted in a wider context as well, since Russia lent a helping hand to Armenia during the bloody times of the Armenian Genocide, a dark chapter in the history of the 20th century.

During the First World War, Armenian volunteers fought on the side of the Russian Empire, which led to animosities on the side of the Ottoman Empire. From 1915 to 1917, the Turkish authorities slaughtered 1.5 million Armenians on territories annexed by Turkey, a sad fact that modern Turkey is denying until this very day.

Many Armenians fled to Russia during the horrible years of the holocaust. The city of Saint Petersburg issued a silver memorial coin as early as 1915, to remind all Russians of the Armenian Genocide.

These events are traditionally commemorated in Armenia on the 24th of April each year, the Armenian Martyr day, also called Day of the Armenian Genocide, when thousands of Armenians from all over the world come together at the site of Tsitsernakaberd in Yerevan.

This impressive Genocide Memorial is located on a hill, overlooking the capital city. Its construction began in 1966, during Soviet times. The Memorial was designed by the Armenian architects, Arthur Tarkhanyan, Sashur Kalashyan and Hovhannes Khachatryan.

The 44 metre high stele symbolizes the national rebirth of Armenians. An eternal flame keeps burning for the 1.5 million Armenian victims of the Ottoman Empire. A 100 metre long wall shows the names of all the towns and villages where massacres took place. As a further act of commemoration, an alley of trees was planted at the site.

There is also an Armenian Genocide Museum, which was inaugurated in 1995. The museum offers tours in many languages. The Armenian Government has made the visit of the Genocide Museum a part of its official state protocol. Many foreign politicians have already visited it, including President Vladimir Putin.

Some of the districts in Yerevan have been named after former communities that were destroyed by the Ottoman Turks during the Armenian Genocide. Walking along the streets in these quarters brings tears to the eyes of Armenian descendents from the worldwide Diaspora, when they visit the land of their ancestors.

Some persecuted Armenian families fled to Russia, but many emigrated to far-away continents. The largest Armenian community in Latin America can be found in Argentina. In October 2012, Yerevan hosted the World Armenian Congress, where Armenians from all over the world gathered, to refresh ties with the homeland.

In his New Year's greetings for 2013, President Vladimir Putin sent a message to the Armenian President, noting that in 2012, Russia and Armenia made significant progress in strengthening their alliance. He expressed his confidence that in 2013, "joint efforts to build the Russian-Armenian partnership will continue."

The Russian-Armenian economic ties are doing very well. Russia is Armenia's biggest trade partner, with a broad and diversified economy. The money that Armenians living and working in Russia send home amounts to one billion USD, a large part of Armenia's GDP.

Armenia owns deposits of copper, gold, lead and zinc. The country's energy is produced mostly with Russian fuel, the main domestic energy source being hydroelectric. Due to a wide range of economic reforms, Armenia has made steady economic progress in the past decade.

To further develop Russian-Armenian cooperation, President Vladimir Putin's Government appointed the Russian Transport Minister, Maxim Sokolov, as co-chairman for the bilateral commission, which has the task of drafting a roadmap of Russian-Armenian economic relations until 2020.

If the predictions of the Russian Nostradamus are true that in 2013, Russia's "Golden Age" is beginning, both allied partner countries may look forward to enjoying golden times.