In demising Europe, only gays are happy

Permanent representatives to the European Union decided to extend sanctions against Russia. The final decision is to be approved at a meeting of EU foreign ministers on June 22. This is quite a symbolic date indeed. History will repeat itself as farce this time. The EU has triggered the program of self-destruction. The EU may explode any time, starting in Greece, Finland and Hungary. 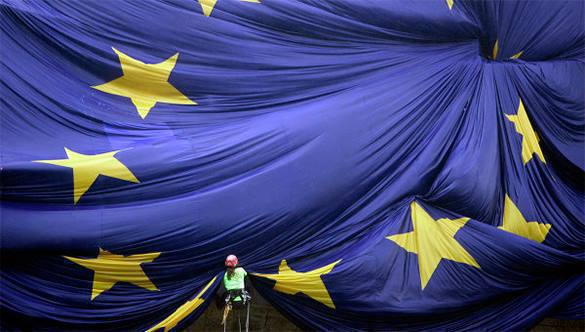 Washington failed to break Moscow's spine in the course of the crisis in Ukraine. Russia still stands firm on its positions, and the US administration announced readiness to toughen sanctions against Russia. New potential penalties include a variety of measures - from adding new personal and company names to the sanctions list to imposing restrictions on Russian energy exports. To crown it all, Russia could be removed from the international settlement system, the AP reports with reference to its sources. The Europeans were quick to endorse the decisions taken by the White House and ordered the arrest of Russian property in Belgium and France.

All EU countries are obliged to become NATO members before joining the bloc. They sign secret protocols that oblige their governments to "guarantee internal orientation on the western bloc by any means, even if electorate shows different preferences," Swiss researcher Daniele Ganser wrote.

European electors do show different preferences. Most Europeans are primarily concerned about the ongoing uncontrolled migration from troubled countries, the growth of social inequality and unemployment. "Europe's solidarity with Russia" is not a priority at all. Social disparities between those having a good job and those  without it is becoming catastrophic.

Inequality is everywhere - between men and women, between the old and the young. It appears that only gays are happy. Many European countries are dying under the burden of debt and the need to socially maintain migrants from Iraq, Syria, Kosovo, Afghanistan and North Africa.

Long-term investment has been declining steadily over the last seven years on account of the lack of trust between the countries of the bloc.

Also read: The Lunacy of Sanctions and the Psychosis of US Exceptionalism

Only 24 percent of respondents believe that their country's economy will be improving during the next 12 months. The belief in the benefits of "deep economic ties" in the EU is the highest in Germany (59 percent) and the lowest in Italy (11 percent). Fifty-four percent of the polled believe that the growing influence of non-traditional parties would be a good sign for their country. They are Eurosceptic parties, such as PODEMOS in Spain, Five Stars in Italy and Independence Party (UKIP) in the UK.

Instead of dealing with their own, highly serious problems, Europe continues escalating conflict with Russia being completely unprepared for the struggle against the Islamic State. Charlie Hebdo was only a start. The EU may explode because of its own contradictions.

The state of affairs in Greece is extremely intense. Before June 30, Greece must repay 1.6 billion euros of IMF loans. Greece will not be able to do it unless the country receives another tranche from the IMF in the amount of 7.2 billion euros. The Greeks stubbornly refuse to lower wages or pension or increase VAT on electricity. Therefore, it is very much unlikely that the IMF will give Greece another loan.

Also read: Do Europeans owe their lives to migrants?

The Greek government is preparing its people for exit from the euro zone. The Greeks have withdrawn a record of 820 million euros from banks on Wednesday. Tony Barber, editor of the European division of The Financial Times, believes the return of Greece to the national currency will create a situation, in which the European unity loses sense. Sooner or later, the question of membership in the euro zone will surface in other EU countries, Barber believes.

Hungarian Prime Minister Viktor Orban decided to build a four-meter-high wall along its border with Serbia (175 km in length) to stop the flow of illegal immigrants into the country, Hungarian media report.

This means the end to the Schengen zone. If European officials put pressure on Orban, he may decide to take Hungary out of the European Union.

Others are still silent. For example, Finland's exports to Russia in the first quarter of this year have fallen by 34 percent to 700 million euros. The quantity of tourists from Russia has dropped by 50 percent.

"The meeting on June 22 will be an interesting one. Foreign ministers may come for the meeting with different views, and I hope that Greece, Hungary, and possibly several other countries will declare their disagreement about the move to extend sanctions against Russia," Igor Morozov, Senator, Member of the Federation Council Committee on International Affairs, told Pravda.Ru.

Now when the EU is bursting at the seams, European leaders need to think about national interests in the first place. The continuation of the sanctions policy against Russia will strengthen the economic crisis in Europe.

Western sanctions were imposed without an approval from the UN and are therefore illegal, Adalbi Shkhagoshev, a member of the State Duma Committee on International Affairs told Pravda.Ru. The MP added that Russia would respond accordingly, should the West extend sanctions against Russia.

"It does not cause damage to us. Quite on the contrary, domestic producers say that the Russian authorities should expand the food embargo. The US and EU want to hold Russia back, but they will have to deal with an opposite effect. Russia will be developing very active cooperation with BRCIS and the Eurasian Union. In  short term perspectives, any sanctions cause damage to any country. In long term perspectives, these sanctions will teach Russia to work for itself," Adalbi Shhagoshev told Pravda.Ru.

One is left to note that Russia started getting ready for the sanctions before they were introduced. Russia had reduced its public debt, got rid of US securities and started the process of deoffshorization of the country. It is obvious that Russia will overcome this crisis with minimal costs.