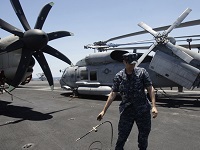 American soldiers returning home from Afghanistan and Iraq become drug addicts. Their life takes such a turn not because of war traumas or adverse social environment, but because of the strategy of treatment practiced in military hospitals.

The US-based Center for Investigative Reporting found out that most common medications used to treat yesterday's soldiers, are opiates. In practice, they are conventional drugs that are used to ease the suffering of a patient. Military hospitals do not conduct any type of treatment to addressing causes of diseases.

Former doctor of a military hospital, Pamela Gray, said at a congressional hearing that hospital management prescribed as many opiates as possible to servicemen. A refusal to use drugs would entail dismissal, said Gray, who eventually had to resign from that hospital.

According to statistics, after the deployment of U.S. troops in Afghanistan, the volume of drugs prescribed by doctors of the medical service of the department for veterans' affairs, has grown by 270 percent, although the number of patients over the same period has increased at a much smaller scale. In 2009 alone, former soldiers received 3.8 million prescriptions for narcotic medicines.

The treatment has led to the growing number of crimes committed by veterans, says RBC. Once a patient feels that the prescribed opiates are not enough for them, they try to get he meds for themselves illegally. In some cities, where hospitals are located, courts have to provide a special day in their schedule for those veterans, who broke the law.

Many of addicted veterans, one in every three of them, to be more precise, either die from a drug overdose, a lethal combination of various potent drugs or commit suicide. One out of five dies in car accidents. Among those who were diagnosed with PTSD (post-traumatic stress disorder), the numbers are even worse: up to 80 percent of patients die from the above-mentioned reasons.

Here are just a few specific names and facts. Chad Mitchell, 40, a veteran of seven overseas operations, was found dead at his home. A medical examination revealed the presence of six potent substances in the body, including powerful narcotic painkillers - methadone and oxycodone. It was later revealed that the drugs had been prescribed to Mitchell to relieve pain from a shoulder injury that he received in Iraq.

Twenty-four-year-old veteran Paul Norris died in a car accident as he crashed his car into a street fence at high speed. According to his parents, Norris lost control of the car because of his memories of the war in Iraq that had been haunting him. Justin Languis, a 31-year-old  veteran of Iraq, shot himself in January 2011 at the Fort Hood memorial wall commemorating fallen soldiers of the 1st Cavalry Division.

Officials with the Department of Veterans Affairs only say that they need to obtain information on causes of death of each veteran, but local authorities are not obliged to provide it.

Is it an intentional policy of the US government to turn former soldiers into drug-dependent offenders, or do doctors simply take the path of least resistance mass-prescribing potent drugs to avoid costly therapy? Young Americans, who are sent across the ocean to "defend democracy," return home, but their country no longer needs them.