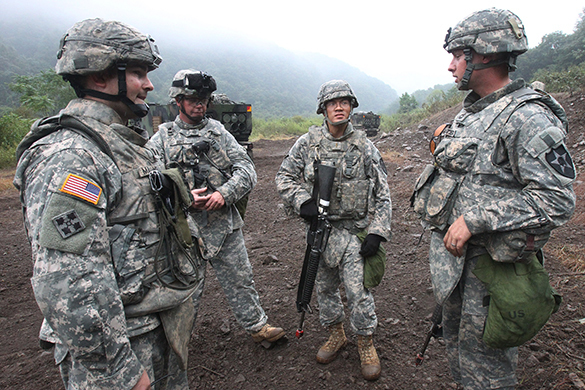 "...Evil minds that plot destruction. Sorcerers of death's destruction. In the keeps turning. In the fields the bodies burning as the war machine keeps turning...Politicians hide themselves away. They only started the war. Why should they go out to fight?  They leave that role to the poor." Black Sabbath,War Pigs

Oh, it's  out there. It is the US government's Selective Service/Draft program that currently requires all males 18 years of age to willingly sign up for the opportunity to have the US government force them, under penalty of law, to work for the government in a killing and maiming capacity (military employment), or in a supporting role for those who are on the front lines doing the US government's dirty work in far away lands and, who knows, perhaps here in the USA.

The Selective Service/Draft system us in sort of a state of suspended animation to be used only when a national crisis forces the US government to dig into the pool of bodies when the volunteer military force can't handle the load placed on them by the requirements of its own government or the enemy.  Open conflict with Russia, China or an intervention to stabilize a collapsed Mexican government/economy would likely necessitate activation of the Selective Service/Draft.apparatus. Already the US national security machinery is stretched to the breaking point with active duty and national guard personnel seeing multiple rotations to conflict zones on every continent. Domestically, the support network-including communities, families, volunteer organizations--for returning military personnel suffering from debilitating injuries to mind and body is nearly broken ,aided and abetted by greedy private contractors looking to make money not alleviate the suffering of the veterans.

Politicians and military commanders fear the activation of the Selective Service/Draft lottery as they would lose the ability to respond to the disgruntled or abused soldier, " You are the one who volunteered." This even though study after study shows the much ballyhooed volunteer military force exists largely because the civilian marketplace has no need for low-level labor (as it continues to jettison labor, Target for example) or the military  marketing campaign that pushes the myth that military service trumps that of civilian law enforcement and first res ponders who keep American communities as :"free and safe" as possible.

According to Mint Press, '"The military also seems to be drawing recruits who have less education, as a recent report documented the percentage of new recruits entering the Army with a high school diploma dropped to a new low. The study, which was conducted by the National Priorities Project (NPP), found slightly more than 70 percent of new recruits joining the active duty Army had a high school diploma, nearly 20 percentage points lower than the Army's goal of at least 90 percent. Army officials confirmed lowering their standards to meet high recruiting goals in the middle of ongoing conflicts that the U.S. was involved in around the world. Massachusetts-based research NPP concluded that the number of high school graduates among new recruits fell to 70.7 percent in 2008. "The trend is clear," Anita Dancs, the project's research director who based the report on Defense Department data released via the Freedom of Information Act, [indicated],"They're missing their benchmarks, and I think it's strongly linked to the impact [of] the Iraq War." The study also found that the number of recruits with both a high school diploma and a score in the upper half on the military's qualification test fell by 15 percent from 2004 to 2007. An analysis of recruiting data revealed that low- and middle-income families are supplying far more Army recruits than families with incomes of more than $60,000 a year.'"

War Pigs: You are Fungible

There are too many War Pigs to count. According to CNN "Former Texas governor Rick Perry wants US troops to go and fight ISIS in the Middle East. He terms the group "the face of evil." Senator Lindsay Graham, a former military litigator, said this at an AIPAC conference, " And if military force is ever employed [against Iran], it should be done in a decisive fashion. The Iranian government's ability to wage conventional warfare against its neighbors and our troops in the region should not exist. They should not have one plane that can fly or one ship that can float." That means that the US "volunteers" will be responsible for eliminating all the Iranians who operate such machinery. One assumes that Graham also thinks no armored vehicles or missile systems or small arms should exist either. The US military would need more than a volunteer force to totally defeat Iran and would c;likely contemplate the use of tactical nuclear weapons. Graham is clearly on the edge of insanity's black hole as are his fellow Hawks.

On that note, American War Pigs want to sell lethal weaponry to its puppet government in Ukraine and actually want to get into combat with Russian troops. Chairman of the US Joint Chiefs of Staff Army General Martin Dempsey said, "I think we should absolutely consider lethal aid..." according to Time Magazine. That means private contractors are needed to sell the machinery and train the Ukrainian personnel.

Women will not long be exempt from Selective Service/Draft registration. It is only the continued dominance of the patriarchs that dominate US society that prevents women from shouldering the burden that men face with  their Selective Service responsibility. Sean Kennedy writing for Collegian Central indicated that when Congress lifted the ban on women in combat in 2013, many people expressed concern that the inclusion of women would somehow degrade the quality of our military forces. Enter US Senator John McCain, War Pig extraordinaire and the the same American representative who glad-handed Ukrainian neo-Nazi and anti-Semite Oleh Tyahnybok in a show of support. "Senator John McCain urged special forces units to ensure that their "rigorous physical standards" are maintained. Never mind that women make up 15 percent of our military or that women have fought for our country as early as the Civil War. While there are certainly physical differences between men and women, the argument that this disparity is enough to warrant the exclusion of women is ludicrous and the perfect example of the mindset we need to distance ourselves from as a country."

Not to worry. If a war with Russia or China breaks out, or with some as yet some unforeseen enemy, McCain and his ilk will be the first to turn to the  Selective Service/Draft system to force women to fill the ranks of dead and wounded US military males.

The American war machine is positioning itself for large scale conflict. Every able-bodied American citizen, female and male, will be needed for the carnage.

John Stanton is a writer from Virginia. Reach him at [email protected]

American soldiers were told to specifically kill women and children

US Servicewomen Suffer from Sexual Harassment in Iraq