EU lashes itself as Russia shuts down South Stream

On December 1, Russian President Vladimir Putin paid a one-day visit to Turkey. After a three-hour meeting with his Turkish counterpart Recep Tayyip Erdogan, Putin stated that the South Stream project, which was supposed to deliver Russian natural gas - up to 63 billion cubic meters - to South and Central Europe bypassing Ukraine, would be stopped. Putin stressed out that the move had to be made against the backdrop of EU's opposition, as the project could not be implemented without Bulgaria's permission. 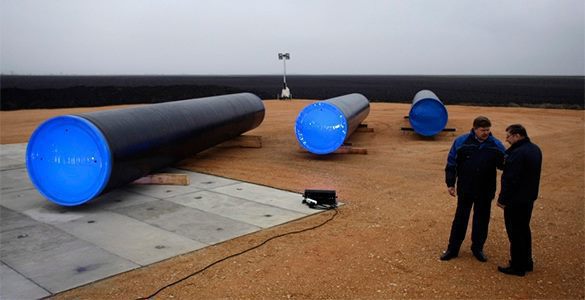 Western publications split in their estimations of Russia's latest decision. The New York Times wrote that the decision to shut down the project was Putin's diplomatic fiasco. On the contrary, The Times wrote that Putin declared gas war on Europe. According to the newspaper, using economic tools, Moscow tends to punish EU countries for their condemnation of Moscow's actions with regard to Ukraine.

As it became known, instead of South Stream, Russia's Gazprom plans to turn the gas pipe towards Turkey. The latter may thus become the largest mediator in selling the Russian gas. Putin said that the capacity of the Blue Stream pipeline would be increased. In addition, an extra gas hub will be built on the Turkish territory on the border with Greece.

The head of Gazprom, Alexei Miller, stated that the construction of the pipe to Turkey could be conducted with the participation of local investors. The sea part of the pipe will start from booster station "Russkaya" - the starting point of both the South Stream gas pipeline and the Blue Stream pipeline that already works. According to sources of the Kommersant newspaper, it is cheaper to abandon the projected route and build a pipeline in parallel to South Stream, running the remaining part via Turkey.

According to The New York Times, Turkey is the winner in the ongoing standoff between Russia and the European Union. Following China, Turkey has managed to gain advantage of the conflict and secured long-term energy supplies at discounted prices.

Noteworthy, Ankara may have problems in relations with the West as a candidate for membership at the European Union. It just so happens that Turkey is acting in opposition to EU's efforts to put pressure on Moscow through economic sanctions and reduce Europe's dependence on Russia's natural gas. Russia currently ships nearly 30 percent of its natural gas to Europe.

Although it was obvious that South Stream could ensure reliable supplies of natural gas to Europe, it was Europe, rather than Russia, that refused from the project, RBC said. This is an erroneous strategy of inexperienced European bureaucrats, Sberbank Investment Research analyst Valery Nesterov told RBC.

Having forced Russia to abandon the project, Brussels has lashed itself. Bulgaria, for instance, will lose $400 million a year in gas transit revenues.

Now the Turkish pipeline, the construction of which Gazprom is set to start, will remove the problem of gas transit through Ukraine for deliveries to Turkey, Greece, and probably Bulgaria. Gazprom can ship gas to Slovakia, Austria and Hungary via the Nord Stream pipeline. However, Serbia, small countries of Western Balkans and Italy will remain dependent on the Ukrainian gas transportation system.

EU's recent opposition to South Stream was connected with Brussels' wish to  support Kiev in its confrontation with Moscow. Ukraine has always been a tough opponent to the project, as it could destroy its gas transportation system. As analysts suggest, Kiev will now try harder to change gas transit terms. Thus, the risks for gas transit to the EU will increase.

South Stream is a natural gas pipeline project of Gazprom with the capacity of 63 billion cubic meters across the Black Sea to countries of South and Central Europe. Deliveries of Russian natural gas through the pipeline were to begin in late 2015. The system was supposed to operate at full capacity in 2018. The total length of the Black Sea leg of the system was to make up 925 km; The land-based section of the pipeline - 1,455 km - was to be built via Bulgaria, Serbia, Hungary and Slovenia.

President of the Union of Oil and Gas Producers of Russia, Gennady Schmal, said in an interview with Pravda.Ru that it was sad for him to learn about Russia's decision to close the project.

"Of course, it is a pity, because it took a tremendous amount of time to negotiate with so many countries. About $5 billion has been spent. Yet, Bulgaria would say yes, and then no, then its government was sacked and the new government was formed. We can not be held hostage to the behavior of our Bulgarian "friends" - we can not be blackmailed all the time. Putin's decision is completely justified. There are alternative projects too," the expert told Pravda.Ru.

According to him, such a turn of events is even better, because it will be possible to pay more attention to eastern projects, such as "The Power of Siberia" and "Altai".

"Bulgaria will lose a lot indeed. Without investing a penny, they could have profit from the transit of Russian natural gas. But it will not be. As for gas shipments, there are different options for that - through Turkey or Greece. Afterwards, we will build several other pipeline, including the Nord Stream along the bottom of the Baltic sea - 1,200 km," Gennady Schmal told Pravda.Ru.

The expert also commented on the statement from Bulgarian political analyst Ognyan Minchev, who said that "Putin's refusal to build South Stream means that the EU has protected its rights and interests and complied with the Third Energy Package, which includes compliance with laws of competition in the EU."

"If interests of the EU are is more important to him than interests of Bulgaria, it is up to him to decide. I believe that every country, whether it is a part of the EU or not, has its own interests to defend it. In this case, the project was interesting for many countries, including Austria, Serbia and Macedonia. Therefore, Bulgaria's refusal affected their interests too. Therefore, I believe that the statements from our Bulgarian colleague are ethical, to put it mildly, in relation to his own people."