Portugal, a member of the EU since 1986, is rapidly losing its population due to significant emigration. In terms of the economic indicators Portugal is approaching the level of the least developed countries in the Eastern Europe. The decline became particularly rapid three years ago, when Portugal began to receive financial assistance from the EU. Isn't it an odd coincidence? 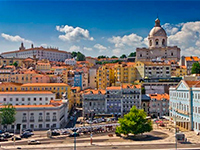 The country is deteriorating politically, economically, and morally. Public debt and unemployment are on the rise, and increasingly more able-bodied people of reproductive age are leaving the country. According to the data by Observatório da Emigração, since 2008 about 400,000 people left Portugal, it terms of the percentage of the total population (10.6 million people) this is the second maximum rate in Europe after Malta with a population of just under one million. The country has lost a fifth of its resources in the skilled labor segment.

In addition, Portugal has become the country with the fewest immigrants as a percentage of the total population, according to the Portuguese media.

According to Associação Portuguesa de Psicologia da Saúde Ocupacional, nine out of ten Portuguese want to change their life and are dissatisfied with their jobs. The Association warns that constant stress and depression cause significant harm to the public health. Such conclusions can be safely extrapolated to all EU countries on the "southern periphery" of the Union.

They all have planned budget spending reduction for wages, pensions, social needs, and privatization, which means a significant reduction in jobs. Particularly hopeless, according to European statistics, are Lithuania, Romania and Bulgaria.

Portugal gets help from the EU tranches (totaling 78 billion euros). The assistance was allocated in 2010 for economic recovery and paying the enormous public debt. However, it appears that over the three years the situation has not stabilized but worsened.

"Portugal is close to the least developed countries in the Eastern Europe," Rui Pena Pires, representing the University of Lisbon ISCTE-IU, told newspaper Económico Rui Pena Pires. Rui Pena Pires believes that the situation can be rectified, but it all depends on the resumption of economic growth. If this process is delayed, it will be very difficult to fix the demographic failure, and there is also the likelihood of worsening of its consequences, said the expert.

Experts predict the exodus of the Portuguese to be at the level of 100 - 120 thousand people a year. Analyzing qualifications and age bracket of the immigrants, they came to the conclusion that those who leave are mainly semi-skilled workers who have sufficient means to rent housing overseas, and a small capital to survive for some time without work. The poorest population does not emigrate, except for rare cases where they are invited to reunite with their families.

Skilled workers are a minority. For example, in Luxembourg, where 19 percent of the population is Portuguese, only two percent are qualified employees of the financial and scientific sector. Mostly the Portuguese overseas work in construction, utilities, hospitality sector, trade, and services.

Despite popular misconception, the majority of emigrants are not unemployed (unemployment in the country is at 17.5 percent) but people dissatisfied with their lives. They want to develop their career, be paid more competitive salaries, and have status and recognition they cannot get at home. In some sectors, such as medical, the situation is catastrophic. Both doctors and hospital staff are leaving the country. This is the industry where the state spends a great deal of money on training. For example, about 16.5 thousand Euros is spent to train a nurse.

Most emigrants are young people of reproductive age, which causes a decline in the natural population growth. According to the National program of early diagnosis, in 2011, Portugal for the first time in history has reached its lowest level of birth - 100,000 babies.

The situation continued to worsen, and in 2013 there were only 90,026 newborns. This year, this figure is projected to be 8,000 lower. "Emigration of young people is a sign of the current unfavorable regulatory process of the Portuguese economy, and the major factor limiting its growth potential," warned the Bank of Portugal.

The leader of the opposition Socialist Party (the ruling coalition is headed by the Social Democrats) Albert Martins said that the government was pursuing a policy that lead to unemployment, poverty, immigration, insecurity, and depression.

However, in order to see the Portuguese abyss more clearly, let us look at data presented by not the alleged leader of the opposition (the Social Democrats in power are replaced by the socialists, creating the appearance of the opposition) but the Communists who are represented in the Parliament and have influence among the people of Portugal.

On February 22, the National Assembly of the CPR provided the following figures. Since the inception of the EU assistance, none of the goals set by the three creditors (European Commission, European Central Bank and International Monetary Fund) have been reached.                 The GDP losses amounted to 5.8 percent, twice the planned amount. In the absolute terms, GDP decreased by 9.4 billion euro.

Falling investment were expected at 15 percent, and over the three years of help this number has already reached 37 percent. The number of jobs has been reduced five times more than it was announced, which means that 464,000 jobs have been destroyed. The country's debt in 2010 was 93 percent of GDP, and it was promised that it would not rise above 115 percent, but today it is 130 percent of GDP and grew by over 51.5 billion euros.

The budget deficit has not reached the promised three percent, and will be higher than five this year, despite a sharp decline in spending on social services and public sector. The victory belongs to the mega-banks cartel that controls the real sector, and the country and future generations are the losers, said in his speech Secretary General of PPC Jeronimo de Sousa.

What is next? Next is servicing of the debt that is only expected to grow because the banks borrow from the ECB at 0.25 percent per annum, and then invest in Portuguese securities at 5.1 percent (the average yield on government bonds), yielding a huge profit. This is why Portugal has to pay over 7 billion euros per year in interest alone.

The government does not take responsibility for the rampant destruction of the real sector of the country and thousands of bankrupt companies, for the brutal and massive unemployment that contributes to the daily emigration of thousands of Portuguese, weakening of the country and its future, for the increase in labor exploitation and concentration of wealth that leads to an accelerated process of impoverishment for millions of Portuguese, spread of poverty and social exclusion, for the violation of fundamental constitutional rights to employment, health, social security and education, said Jeronimo de Sousa.