Latin American and Caribbean countries advocate South cause in UNO

United Nations. The end of colonialism, the materialization of the official development assistance, peace and respect for the rule of law were this week among the claims of Latin America and the Caribbean at the UNO. Cuba, the pro tempore President of CELAC, called for the strengthening of the rule of law and also for nuclear disarmament. 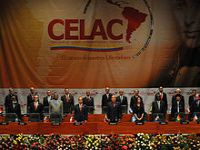 Sometimes through the integrationist Community of Latin American and Caribbean States (CELAC) and others through other representatives of countries in the region, there was intervention in high level commissions and debates of the General Assembly, which closed its fourth week of the 68th working session.

On behalf of CELAC, its president pro tempore, Cuba, advocated for strengthening the rule of law adopting the bonds of this principle with the three pillars of the United Nations: peace and security, human rights and development.

In the Sixth Committee of the Assembly, which deals with legal issues, the island reminded that since its founding in 2011, the Community has set a stance in favor of unrestricted respect for international law, the peaceful settlement of disputes, self-determination, territorial integrity and non-interference in internal affairs.

Moreover, the block of 33 countries called "firmly upon states to refrain from promulgating and implementing any unilateral measures of economic, financial or business that is not in accordance with international law and the UN Charter." CELAC also reiterated its commitment to the fight against terrorism and rejection of all such acts.

The Cuban ambassador to the UN, Oscar Leon, intervened on behalf of the regional mechanism in the debate on "Measures to eliminate international terrorism" as part of the activities of the Sixth Committee itself. In turn, Venezuela endorsed the guidelines in the Fourth Committee of decolonization that was proposed from Argentina, Puerto Rico and the Saharawi Arab Republic.

The Venezuelan Permanent Representative to the UN, Samuel Moncada, found that colonization is a fact inconsistent with the UN Charter and the spirit that led to the founding of the existing world. "Colonialism violates international law in the XXI century and endangers the cause of world peace and cooperation," said the diplomat before the Special Political Committee on Decolonization.

Argentina has claimed sovereignty of the Falkland Islands, which the United Kingdom has held since 1833, Puerto Rican separatists demand self-determination outside the domain of the United States, and the Saharawi people requires Morocco to withdraw from its territories.

In the Sixth High-Level Dialogue on Financing for Development, Belize requested increased international support for countries in the South, in particular the fulfillment of the covenant by the rich nations. The name of the small island states of the Caribbean, Africa, the Mediterranean and the Pacific and Indian oceans, recalled that of the 0.7 percent of GDP from industrialized nations to official development assistance, only about 0.29% has been effectively used for this purpose.

We urge our development partners to fulfill their commitments, from the provision of time and in a predictable manner providing the financial and technical support they need, said the Permanent Representative of Belize, Lois Michele Young.

For Belize, this support is key to face challenges such as the fight against poverty and the negative impact of climate change. During the week, for Latin America and the Caribbean, Argentina called on the Assembly to find a political solution to the Syrian crisis and Cuba made a call for nuclear disarmament .