Israel continues to struggle with illegal immigrants, despite the efforts of human rights defenders to review and mitigate immigration laws. In 2012, the Israeli Knesset passed a controversial law on the imprisonment of illegal immigrants for a period of three years, which caused negative reactions from "leftist" parties. 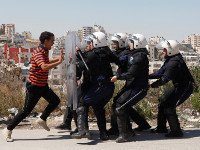 Another initiative stipulated tougher penalties for the employment of foreign nationals, who had no work permits. At the same time, the Government of Israel initiated the costly construction of a security wall on the border with Egypt. Hundreds of migrants - mostly from Sudan - would easily enter Israel through a neighboring country.

While Europe is reaping the bitter fruit of the policy of multiculturalism, the Israeli authorities began to take active steps to stop the inflow of illegal immigrants. In the south of the country, the border runs through the Negev Desert, where Israeli border guards struggle against illegal migration and drug trafficking for years.

The construction of the border security wall began in November 2010 and was completed in January 2013. In total, the project cost $ 430 million. Was the multi-million-dollar spending to strengthen the Israeli-Egyptian border justifiable?

Official reports show that the number of migrants coming from Egypt has decreased significantly. Thus, in March of 2013, only three individuals were able to illegally cross the Egyptian-Israeli border. Observers say that illegal immigrants may use other channels to enter the country.

"We are aware of the intentions of those, who help illegal immigrants to move to Israel, to send them to cross the border in the places, where the fence has not been built yet. It goes about the border with Jordan and also by sea, traveling from Amman to Eilat by boats," lawyer Yoshi Gnesin told Cursor news agency. From the very beginning, it was clear that the fence would not stop refugees. According to Gnesin, preserving the current law in its present form is necessary to stop the phenomenon of illegal entry into the country.

According to various estimates, there are 30-55 thousand immigrants from African countries in Israel at the moment. Officials say that the expulsion of illegal immigrants will continue. The majority of African countries are extremely reluctant to accept refugees, though. Tel Aviv can not ignore international conventions that prohibit the deportation of people to the countries where they face life-threatening conditions. The majority of refugees come from Sudan and Eritrea - the countries that are included on the list of most dangerous states.

It has recently transpired that the Israeli authorities found a diplomatic solution to the problem of illegal immigrants. Israel allegedly managed to agree on the deportation of Eritrean refugees to a third country. No details of the agreement have been disclosed. According to Walla website, it goes about a small African country that agreed to shelter illegal immigrants in exchange for supplies of agricultural equipment. However, the Israeli Foreign Ministry declined to comment the reports on the subject. Officials of the ministry do not know anything about such agreements, nor do they conceal their surprise about the recent statements from lawyer Yoshi Gnesin.

Meanwhile, Zman.com website published a vague statement from an unnamed official of the Foreign Ministry, who, in particular, said: "A few years ago, Prime Minister Benjamin Netanyahu instructed former high-ranking employee of Mossad, Hagai Hadas, to coordinate all efforts on the problem of illegal African migrants, - he said. - All this time, Hagai Hadas was cooperating with us directly, informing us about everything. But it can be possible that he tried to act through his own channels. It hard for me to believe that he succeeded there, but we can not exclude such a possibility," the official said.

It is worthy of note that the Israeli authorities have managed to stop the massive influx of illegal immigrants into the country almost completely. The problem itself has not been removed from the agenda yet. Israel's attempts to solve the problem of illegal immigrants with the help of such strong measures may undermine the country's image in both Europe and the Middle East. Now Netanyahu's government will have to work out a coherent policy to handle the problem of refugees from Sudan and Eritrea, who already stay on the territory of the Jewish state.