No American democracy for Americans?

The U.S. considers itself the most democratic country in the world. At the same time, the country is a leader when it comes to surveillance of its own citizens. If earlier more resources were required to monitor citizens, now extensive networks, high-speed computers and other modern technology significantly reduce costs. 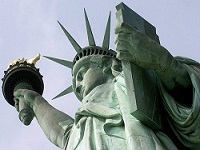 The Mayor of New York Michael Bloomberg, commenting on the total implementation of surveillance and rumors about possible use of unmanned aerial vehicles to monitor the situation in the streets, said that the process would not stop, and the citizens must get used to it.

Every day, hundreds of thousands of surveillance cameras record faces entering the metro and various buildings, as well as license plates of passing cars. Very soon, drones with high-definition cameras may appear in the sky.

The authorities called such steps excessive security. Human rights activists protested, saying that this was an attempt of total control over the Americans, with the use of military developments.

Michael Bloomberg said that in the event of a shooting or murder, the first thing that the police ask for is footage from security cameras, as now they are installed everywhere. The Mayor stressed the need to get used to this and not be afraid. He added that people may be scared of drones, but what is the difference between a camera on a building or a drone? He said that soon face recognition technology would be implemented and the surveillance zone will be expanded. The citizens and government should only establish control over the work of these systems.

Bloomberg is confident that the installation of cameras will help the police to identify criminals (ranging from traffic offenders to murderers) and save resources. However, the exact information on the number of New York police cameras is not available in public domain.

We only know that police installed about 3,000 cameras in the streets of Manhattan. The system also includes cameras in the buildings of large companies in the downtown. There are over two thousand cameras in the subway, and the same number on the buses.

Ordinary residents installed even more cameras. Every year in New York over 100,000 surveillance cameras are sold. Residents of some areas buy equipment with their own money, and then offer law enforcement agencies to connect their cameras to the combined system.

However, not all Americans are cooperating with the authorities, and many see this as interference in their personal space and signs of a totalitarian society. A New Yorker Thomas said: "If we forget about some of the personal rights, pushing the slogans of national security, one day we can lose our freedom. Individual rights are the most important thing in life. The U.S. has been fighting terrorism for 20 years, but how many incidents the authorities failed to prevent through these surveillance systems? These systems are controlled by people who want to control the society and establish a dictatorship."

There are numerous legal gaps in total use of surveillance cameras. Legislators should study all nuances in detail so that one day the fight against crime does not become a total surveillance of its own citizens.

The U.S. today is developing a system that allows using special cameras to identify people who are agitated and mentally unstable, as well as potential criminals. Most likely, these cameras use a slight shake of the head, limbs and body, though their work principle may be slightly different.

U.S. agency DARPA has long been studying the reasons that make the average person violent. When the mechanism of the appearance of cruelty is understood, the U.S. intelligence services will develop methods for its suppression. How exactly this will happen is not yet clear. Violence will be fought either by chemistry, or remotely by radiation.

The U.S. is also implementing a system that allows fingerprints scanning at a distance of 20 meters. This is a very convenient system that can identify a person quietly in a public place. A person walks by a camera that reads her fingerprints and runs them through the database.

In order to spy on its own citizens, the U.S. government is also using microarrays RFID that can independently identify the owner. These chips are integrated into bank cards, so every American who uses a bank card can always be identified.

It is no longer a secret that mobile communications allow the secret services to obtain the required information. U.S. intelligence agencies have recognized the fact that in certain situations they are watching their own citizens, using data from their cell phones, without the knowledge of their owners.

Americans also control social networks. Several civil law organizations have accused the U.S. company Raytheon of creating a program used for watching people on social networks. The U.S. authorities have been using it since 2010, tracking information on Twitter, Facebook and Foursquare.

The program can also view pictures of the users and identify where they were taken. Each person's location can be followed, including the places they go and even what they eat. This information can help intelligence agencies to predict human behavior.

Cameras installed at every street corner in the United States scan license plates, and tracking the movement of any car is very easy.

The same technology that identifies the owner of the car by appearance is being tested by U.S. law enforcement agencies. The so-called "smart" lights are being installed that can take pictures of people, record video and listen to their conversations. Typically, they are installed in major U.S. cities. Moreover, the U.S. government is creating a cyber-security center to keep track of all citizens.

The center will collect and store information on nearly any person on the territory of the U.S., including phone conversations. The U.S. government intends to spend $2 billion to establish the center. The center will be located in two hangars with a powerful server that can store the volume of data that is two hundred thousand times greater than that of all human knowledge. The above technologies allow figuring out the personality of nearly any person within a few seconds.

The U.S. authorities decided to use military equipment against their people. U.S. drones Predator, originally intended for military operations and the fight against terrorism, will now track movement of civilians. According to their characteristics, these drones should be able to determine even at night whether a person is armed.

Using mobile phones frequency, these devices will be able to clearly identify the location of a person. The U.S. government has legalized the use of drones on its territory, which aroused a storm of outrage from human rights groups. "I am concerned that the UAV will be used against law-abiding firearm owners in the USA," said Alan Gottlieb, founder of the supporters of the Second Amendment of the Constitution. "This will lead to a violation of rights under the Second and the Fourth Amendments."

It seems that the U.S. government is not overly concerned about violation of the rights of its citizens. The important thing is control over everyone and everything. Russian Foreign Ministry in October of last year drew attention of the U.S. administration to the facts of child abuse, police violence, invasion of privacy and reduction of freedom of speech. It also questioned the democracy in the USA, which allows intelligence agencies to check all electronic communications of people located in the country without a court order. But the U.S. government does not want to see the problems and continues to violate the rights of their citizens. In the U.S., there is no anonymity, the last remnants of private life gradually dissolve in the ocean of high-tech devices. Total control of the country could lead to a simple dictatorship, slightly covered with a thin veil of democracy.