Ukrainian sociological group "Rating" published a poll of Ukrainian voters conducted last month that covers hypothetical presidential election. The preferences of the polled Ukrainians are not perfectly clear. The main conclusion is that Yanukovych has a chance of winning in the second round only if he goes against Tymoshenko and neo-fascist Tyahnybok.

What are the results of a public opinion poll for major Ukrainian politicians? Sociologists from "Rating" considered two main options, according to which Yulia Tymoshenko, who was traditionally considered unequivocally the most popular opposition leader, will either participate in the vote or will remain in jail. Another option is that even released from prison she would not be admitted to the race as "previously convicted".

Under the scenario where she remains in prison, the status of the balance of power gleaned from the poll looks as follows: in the first round Yanukovych would gain 28.7 percent of the vote, the leader of "Udar," World Boxing Champion Vitali Klitschko - 19.2 percent, current head of "United Opposition" Yatsenyuk - 17.3 percent, and head of neo-fascist "Freedom" Oleg Tyahnybok - 10.2 percent. 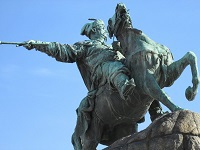 In the event of Tymoshenko's participation in the election, the results change somewhat. In this case, the current head of state would gain nearly the same number of votes as Klitschko - 17.3 percent. The votes previously allocated to Yatsenyuk as the "heir of Tymoshenko" will be given to Yulia - a total of 15.6 percent. Yatsenyuk would gain even fewer votes than Oleg Tyahnybok or communist leader Symonenko - 8.3 percent versus 8.9 and 8.7 percent, respectively.

Such a distribution of vote suggests that claims of the former Prime Minister to the status of the undisputed leader of the opposition, mildly put, are groundless as she would be noticeably inferior to the former boxer Klitschko. The public's choice becomes more obvious when it comes to the second, decisive round of the presidential election. One of the candidates, naturally, would be Viktor Yanukovych, and the other one could be anyone from the four main opposition politicians.

If Yanukovych and Tymoshenko meet in the second round, the situation would be different. 33.2 percent of respondents would support the incumbent President, 36.4 percent - the former prime minister, 22.4 percent would not support any of them and 8 percent would be undecided.

This highest percentage of "against all" and undecided, first of all, shows that Tymoshenko during her reign caused grief to many of her fellow citizens and they do not want to support her, even as the lesser of two evils. And, secondly, this leaves many chances to Yanukovych to snatch the victory from the hands of his old rival at the expense of most of the undecided, mobilizing all available resources, including administrative, advocacy, economic and so on.

An interesting detail: if Yanukovych and Tyahnybok were to get to the second round, 33.5 percent of respondents would support the current head of state, 32.3 percent - the leader of "Freedom", 23.4 percent would not support any of them and 10.8 percent would be undecided.

The results of the poll may significantly change the electoral strategy of the Party of Regions. In fact, it turns out that, contrary to the traditional belief, in the case of participation in presidential elections of Tymoshenko Yanukovych is far more likely to win against other opposition politicians.

Unfortunately, Tyahnybok factor causes significant concern. Judging by the fact that in the last few years the pro-government TV channels have been promoting a little-known neo-Bandera "Freedom," the officials are seriously considering the scenario that has repeatedly taken place in post-Soviet history of Ukraine and Russia. This is the scenario when an unpopular candidate from the current office ends up in the second round against even less popular opposition that the incumbent officials are dragging into the second round as much as they can. For example, it took place in 1996 in the pair Yeltsin-Zyuganov or in 1999 in the pair Kuchma-Symonenko.

However, at the time the outcome of the will of Russian and Ukrainian voters was quite revealing, and the difference was by over 10 percent. Yanukovych, however, would beat Tyahnybok only by two percent, which is on the verge of statistical error. It is quite a probable situation when a nationalist and zoological Russophobe would become the President of Ukraine. If at that time the West decides to replace the current president (at least in defiance of Russia), the country with 45 million people with a large Russian-speaking population would be at risk of being dominated by the neo-fascist regime.

The above risks are an inevitable consequence of the current policy of the Ukrainian authorities. Instead of raising the standard of living of citizens through deeper cooperation with CIS neighbors, they rely on questionable election tactics.