More than 20 thousand laws support gun ownership in the U.S. 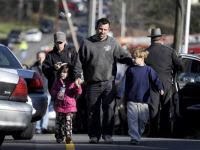 "A well regulated Militia, being necessary to the security of a free State, the right of the people to keep and bear Arms, shall not be infringed."

Over 20 thousand laws are now in effect in the United States on the purchase, possession, transportation and use of firearms, in a nation where almost 300 million of these lethal means belong to private inventories.

Different media reports allude to these figures when the national debate for gun control has reached its highest point, after the massacre that occurred on December 14 at Sandy Hook Elementary School in Newtown, Connecticut where 26 people were killed, 20 of them children . Each year some 100 thousand people are injured or shot dead in this country, according to the Brady Center for Gun Control.

According to this institution, from 23 countries worldwide with more population and higher incomes, 80 percent of the homicides by firearms occurred in the United States.

Other statistics indicate that by the end of November, the FBI had recorded more than 16,808,000 legal procedures for selling weapons, which exceeds by about 350,000 sales throughout the year 2011.

It is also estimated that there are 129,817 federal firearms licenses.

Only on November 28, a date that marked the beginning of the shopping season at year-end, the FBI received 97,848 procurement procedures.

A few days ago, President Barack Obama instructed the Vice President, Joseph Biden, to preside over a committee that will present concrete proposals in January to stop the violence generated by weapons.

However, the powerful National Rifle Association lobby, which defends the rights enshrined in the Constitution to carry firearms, against requiring laws or  controls, proposed on Friday the deployment of armored officers in schools to prevent new massacres.

The last three victims of the slaughter of Newtown were buried on Saturday and, despite the massacres, families mourn also about the continuation of the arms trade.

Altogether, there were about 19 million devices sold in 2012 alone, the highest figure since the FBI began to make public the statistics in 1998.

A survey found that 50 percent of Americans say gun laws should be made more strict than they are now, compared to 43 percent who said that they should remain the same (29 percent) or be made less strict (14 percent). The poll also found support for banning semi-automatic weapons (51 percent to 33 percent) as well as magazine clips holding more than 10 rounds (54 percent to 32 percent).