Britain will never let Falkland Islands out of its hands 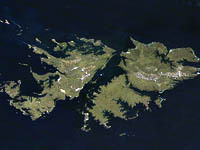 Britain is not going to give Argentina the Falkland Islands (Malvinas). Prime Minister David Cameron accused the Latin American country of "colonialism." In the near future Prince William will arrive to the islands along with the British troops. The vessels that earlier operated under the flag of the Falklands will now display the British "Union Jack".

The issue of the status of the archipelago located in the South Atlantic was raised again in 2010. Then the English began to develop the local shelf, and the Argentines, who consider the island their own, rebelled against it. President Cristina Kirchner began consultations at the UN in order to raise the issue of ownership of the islands. In search of allies, she traveled the world, including Russia.

The British also flatly refuse to discuss anything. "We have no doubt in our sovereignty over the Falkland Islands. Here, the principle of national self-determination is applied inherent in the UN Charter. Negotiations on sovereignty cannot be held, unless the islanders themselves decide to hold them," said a representative of British foreign department a couple of years ago.

Since then a lot has changed. First of all, Kirchner managed to enlist the support of nearly all Latin American countries. Shortly before the New Year, Uruguay and Brazil followed by Argentina banned vessels under the flag of the Falkland Islands from mooring at their coast. The British found their response on the eve of the 30th anniversary of the Argentine-British war of 1982.

Toward the end of last year it was announced that in February-March of 2012 Prince William will visit the Falklands. He will appear there as a pilot of a rescue helicopter of the British Air Force, and the visit will be in a form of military service. Thus the British made it clear: they intend to pay close attention to the Falklands, and they do not intend to share control over these islands with anyone.

On January 18 British Prime Minister David Cameron made a political attack at Argentina. Speaking in the Parliament, he said that his country needs to celebrate the 30th anniversary of the victory over Argentina and worthily honor the memory of those who "gave their lives and never came home." This statement was followed by an exotic attack at Argentina.

Cameron, standing on the rostrum of the House of Commons, said that the statements recently made by Argentina sound like colonialism, because the population of these territories want to remain part of Britain, and Argentina is trying to make them do something else. This is a real surprise: the British accuse of colonialism a country that had long been a colony and never had colonies of its own. Who owned a vast empire stretching from Australia through India and Africa to Canada?

After Cameron, British Foreign Secretary William Hague took the floor. His speech was not as lofty and touched upon purely practical things - how to get around the ban of Argentina, Brazil, Uruguay for Falkland Islands vessels. The solution was found: now they will simply display the British flag. "It is obvious that the vessels under the British flag should have access to the ports of South America, as well as any other part of the world," said Hague during his visit to Brazil.

Regardless of the statements of the British statesmen, their native Britain is a classic example of a colonial power. Its sovereignty over the Falkland Islands located thousands of miles from its shores is the legacy of that same colonial empire.

Why is Britain unwilling to abandon Falkland Islands (Malvinas)? Senior Vice President of the Academy of Geopolitical Issues, captain of 1st rank Konstantin Sivkov, answered this question in an interview with "Pravda.Ru":

"The statement of James Cameron on the colonial policy of Argentina is sheer nonsense. The United Kingdom will not abandon the islands for several reasons.

First, there are oil deposits in the economic zone of the Falklands. Second - biological marine resources. Third - the strategic position of the archipelago. There is a British Navy base on the Islands, and if necessary, greater forces can be deployed. This is a strong point of the British influence in the South Atlantic, and they will cling to it with their teeth. Actually, Argentina needs the Islands for exactly the same reasons.

With regard to the military scenario, it is now unlikely. Of course, the modern British Navy is a picture of misery. In recent decades, its goal was to deter the Soviet (then Russian) submarines at the turn of the Faeroe-Iceland in the North Atlantic. Today, the British are not building aircraft carriers. Their fleet is at maximum at 10 percent of the U.S. Navy. The sea-based nuclear potential is up to 20 percent of that of the U.S., and 30 percent of that of Russia.

Nevertheless, Argentina is even weaker in this respect. Its fleet is too weak to invade the Malvinas (Falklands). Such an attempt would be simply suicidal. Politically the country is not ready for that. Argentina today has a stable regime, its economy is growing. Its leaders will continue making political statements but they are not ready for a war.

If the issue of the status of the islands is raised in the UN, Russia should support Argentina. This is fair historically as the archipelago formerly belonged to this country. It is beneficial politically as well. South America is our ally, while the UK is one of our top opponents."